The territories of Jersey, Guernsey, and the Isle of Man, though also under the sovereignty of the British Crown, have a different constitutional relationship with the United Kingdom, and are classed as Crown Dependencies.[6][7][8] The British Overseas Territories and Crown Dependencies are distinct from the Commonwealth of Nations, a voluntary association of countries which mostly have historic links to the British Empire.

The 14 British overseas territories are:[9]

The original English colonies in the New World were plantations of English subjects in lands hitherto outside the dominions of the Crown. The first such plantation was in Newfoundland, where English fishermen routinely set up seasonal camps in the 16th century.[31]

The colonisation of North America by England began in 1607 with the settlement of Jamestown, the first successful permanent colony in "Virginia" (a term that was then applied generally to North America).

The growth of the British Empire in the 19th century, to its territorial peak in the 1920s, saw Britain acquire over one quarter of the world's land mass, including territories with large indigenous populations in Asia and Africa. The late nineteenth century and early twentieth centuries saw the larger settler colonies — in Canada, Australia, New Zealand and South Africa — becoming self-governing colonies and achieving independence in all matters except foreign policy, defence and trade. Separate self-governing colonies federated to become Canada (in 1867) and Australia (in 1901). These and other large self-governing colonies had become known as Dominions by the 1920s. The Dominions achieved almost full independence with the Statute of Westminster (1931). During the second half of the twentieth century most of the British colonies in Africa, Asia and the Caribbean were granted independence. Some colonies became Commonwealth Realms, retaining the British monarch as head of state, others became republics but acknowledged Queen Elizabeth II as Head of the Commonwealth.[citation needed] 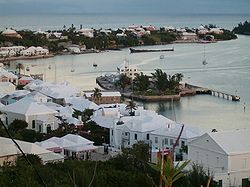 St. George's town, in the Islands of Bermuda, or The Somers Isles. The colony was founded by the wrecking of the flagship of the Virginia Company in 1609. The Company's charter was extended to include Bermuda in 1612, and it has remained an English (since 1707, British) colony ever since. Since the independence of Virginia, it has been the oldest-remaining British colony, and the town of St. George's is the oldest continuously-inhabited English settlement in the New World.[32]

After the independence of Southern Rhodesia (now Zimbabwe) in Africa in 1980 and British Honduras (now Belize) in Central America in 1981, the last major colony that remained was Hong Kong, with a population of over 5 million. Unlike other territories, the territory of Hong Kong had two different arrangements:[citation needed]

With 1997 approaching, the United Kingdom and China negotiated the Sino-British Joint Declaration, which led to the whole of Hong Kong becoming a "special administrative region" of China in 1997, subject to various conditions intended to guarantee the preservation of Hong Kong's capitalist economy and its way of life under British rule for at least 50 years after the handover. This was because Hong Kong's infrastructure was significantly interconnected with that of Guangdong Province, which would make it virtually impossible for those areas ceded in perpetuity to continue functioning without importing virtually all of their necessities.[citation needed]

Following the return of Hong Kong, the remaining British overseas possessions are mostly small island territories with small populations – the only territory of significant area being the uninhabited British Antarctic Territory.

In 2002, the British Parliament passed the British Overseas Territories Act 2002. This reclassified the UK's dependent territories as overseas territories and, with the exception of those people solely connected with the Sovereign Base Areas of Cyprus, restored full British citizenship to their inhabitants.[33]

The head of state in the overseas territories is the British monarch, currently Queen Elizabeth II. The Queen's role in the territories is in her role as Queen of the United Kingdom, and not in right of each territory. The Queen appoints a representative in each territory to exercise her executive power. In territories with a permanent population, a Governor is appointed by the Queen on the advice of the British Government, usually a retired senior military officer, or a senior civil servant. In territories without a permanent population, a Commissioner is usually appointed to represent the Queen. Exceptionally, in the overseas territory of Saint Helena, Ascension and Tristan da Cunha, an Administrator is appointed to be the Governor's representative in each of the two distant parts of the territory, namely Ascension Island and Tristan da Cunha.

The role of the Governor is to act as the de facto head of state, and they are usually responsible for appointing the head of government, and senior political positions in the territory. The Governor is also responsible for liaising with the UK Government, and carrying out any ceremonial duties. A Commissioner has the same powers as a Governor, but also acts as the head of government.

All the overseas territories have their own system of government, and localised laws. The structure of the government appears to be closely correlated to the size and political development of the territory.[citation needed]

† On 16 March 2009 the British parliament voted to suspend self-government in the territory for a period of up to 2 years. A subsequent legal judgement was upheld by three member British Court of Appeal on 12 August 2009, thus allowing the process to be implemented.[37][38]

Each overseas territory has its own legal system independent of the United Kingdom. The legal system is generally based on English common law, with some distinctions for local circumstances. Each territory has its own attorney general, and court system. For the smaller territories, the UK may appoint a UK-based lawyer or judge to work on legal cases. This is particularly important for cases involving serious crimes and where it is impossible to find a jury who will not know the defendant in a small population island[citation needed].

The Pitcairn rape trial of 2004 is an example of how the UK may choose to provide the legal framework for particular cases where the territory cannot do so alone.

Relations with the United Kingdom

The Foreign and Commonwealth Office (FCO) has the responsibility of looking after the interests of all overseas territories the Sovereign Base Areas territory, which comes under the jurisdiction of the Ministry of Defence.[39][40] Within the FCO, the general responsibility for the territories is handled by the Overseas Territories Directorate,[41] which is headed by the Minister for the Overseas Territories. As of September 2011[update] the Minister is Henry Bellingham, a Parliamentary Under Secretary of State.[42]

Britain provides financial assistance to the overseas territories via the Department of International Development. Currently[when?] only Montserrat and Saint Helena receive budgetary aid (i.e. financial contribution to recurrent funding).[citation needed] Several specialist funds are made available by the UK, including:

See also: Special member state territories and their relations with the EU 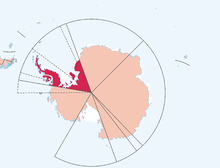 Map showing the portion of Antarctica claimed by the UK as British Antarctic Territory.

Gibraltar is the only overseas territory that is part of the European Union (EU), although it is not part of the customs union and is not a member in its own right. None of the other Overseas Territories are members of the EU, and the main body of EU law does not apply and, although certain slices of EU law are applied to those territories as part of the EU's Association of Overseas Countries and Territories (OCT Association), they are not commonly enforceable in local courts. The OCT Association also provides overseas territories with structural funding for regeneration projects.

Since the return of full British citizenship[45] to most 'belongers' of overseas territories (mainly since the British Overseas Territories Act 2002), the citizens of those territories hold concurrent European Union citizenship, giving them rights of free movement across all EU member states.

The many British overseas territories use a varied assortment of currencies, including the British Pound, US dollar, or their own currencies which may be pegged to either.

None of the overseas territories has its own nationality status, and all citizens are classed as British Overseas Territories citizens (BOTC). They do however, have legislative independence over immigration, and holding the status of a BOTC does not automatically give a person a right to abode in any of the territories, as it depends on the territory's immigration laws. A territory may issue Belonger status to allow a person classed as a BOTC to reside in the territory that they have close links with. Non-BOTC citizens may acquire Belonger status in order to reside in a particular territory (and may subsequently become naturalised BOTC if they wish).

Historically, most inhabitants of the British Empire held the status of British subject, which was usually lost upon independence. From 1949, British subjects in the United Kingdom and the remaining colonies became citizens of the United Kingdom and Colonies. However changes in British immigration and nationality law between 1962 and 1983 saw the creation of a separate British Dependent Territories citizenship with effect from January, 1983. Citizens in most territories were stripped of full British citizenship. This was mainly to prevent a mass exodus of the citizens of Hong Kong to the UK before the agreed handover to China in 1997. Exception was made for the Falkland Islands, which had been invaded the previous year by Argentina. Full British citizenship was soon returned to the people of Gibraltar due to their friction with Spain.

British citizens do not, however, have an automatic right to reside in any of the Overseas Territories. Some territories prohibit immigration, and any visitors are required to seek the permission of the territory's government to live in the territory. As they are used primarily as military bases, Ascension Island and the British Indian Ocean Territory do not allow visitors to the territory unless on official business.

Defence of the Overseas Territories is the responsibility of the UK. Many of the overseas territories are used as military bases by the UK and its allies.

The Sovereign Base Areas of Akrotiri and Dhekelia are the only British overseas territories without an official flag of their own. The Union Flag is used in this territory and is also used for Ascension Island.