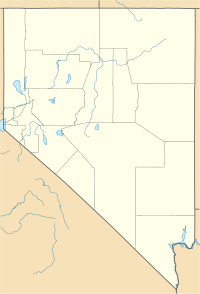 For the civilian airport after 1966, see Reno Stead Airport

Stead Air Force Base is a former United States Air Force base operational in Nevada from 1942 to 1966. After its closure, it was reopened as Reno Stead Airport. It was primarily used for survival training by Strategic Air Command and hosted an Air Defense Command SAGE DC-16 direction center.[1]

Reno Army Air Base was originally assigned to the Second Air Force in October 1942. Although the base was originally intended for use as a training center for Signal and Chemical Personnel, the operation of its facilities required the additional construction to accommodate the number of troops brought there for training.

The 3d Operational Training Unit, Ferrying Division, Air Transport Command assumed command of the base on 7 June 1943 until its deactivation in 1945. It was used as a training airfield for transport pilots to be assigned to the China-Burma-India Theater to fly supply missions over the Himalayan Mountains from airfields in the Assam Valley of India to China ("The Hump"), as the mountainous terrain of the Sierra Nevada Mountains between Reno and Fairfield-Suisun Army Air Base, California was similar. The 585th Army Air Force Base Unit was designated as the host unit on 31 March 1944. On 28 September 1945 ATC shutdown transport training, and the base was placed on temporary inactive status 20 October 1945.

In April 1948, the 192d Fighter Squadron, Nevada Air National Guard, took over the then vacant base for training activities. In December 1949, 1st Lt Croston Stead, a Reno native, lost his life when his P-51 Mustang crashed at the base during a flying training mission. In January 1951, the base was named Stead Air National Guard Base in his honor.

In 1951 it was determined that the Sierra Nevada Mountains and forests would be suitable for survival training; the USAF Survival School and 3904th Composite Wing moved to Stead Air Force Base from Camp Carson, Colorado on 29 May 1951. Equipped with C-119 Flying Boxcars for training, SAC had begun the training for its personnel, teaching them how to survive if forced down in remote and/or unfriendly terrain, how to escape capture, and how to escape if captured

In January 1958, a small group of instructor pilots from Randolph AFB, Texas was sent to Stead AFB to determine the feasibility of advanced helicopter training in the area's mountains. On July 15, 1958, the 3635th Crew Training Wing was redesignated as the 3635th Flying Training Wing (Advanced), concurrent with the relocation of the USAF Helicopter Pilot School to Stead.

In 1959 a Semi Automatic Ground Environment (SAGE) Data Center (DC-16) was established at Reno AFB. The SAGE system was a network linking Air Force (and later FAA) General Surveillance Radar stations into a centralized center for Air Defense, intended to provide early warning and response for a Soviet nuclear attack. ReADS was inactivated on 1 April 1966 as part of an ADC consolidation and reorganization; and its units were reassigned to the 28th Air Division.

During the summer and fall of 1958, the USAF Helicopter School was moved from Randolph AFB to Stead AFB and designated the 3638th Flying Training Squadron (Helicopter). The base provided ample facilities and an unencumbered airspace in which to operate the flying training mission. The base had also recently undergone a large building project of all new Capehart family housing which lent well to the accompanying military families. Pilots would undergo training in the H-19 Chickasaw and Piasecki H-21 Workhorse/Shawnee helicopters. The syllabus would contain basic transition training and instruments as well as advanced operational techniques in high altitude confined area and mountain operations. Training in the HH-43 Huskie was also introduced as that airframe entered the USAF inventory. Pilots from all fixed-wing and rotary-wing backgrounds would also attend the USAF Survival School at Stead in preparation for operational assignments.

Flying training was conducted at Stead as well as an auxiliary airfield, Sky Ranch, located about 10 miles (16 km) east of the base. A number of unprepared ridgetop and pinnacle landing spots at altitudes up to 8,100 feet (2,500 m) MSL were located on Peavine Mountain directly south of the base. A similar number of tree-lined spots were located in Dog Valley, southwest of Peavine, to conduct confined area landing and takeoff procedures. The area north of Stead to Pyramid Lake was used for instrument training.

The 3638th Flying Training Squadron (Helicopter) trained not only USAF pilots but also many from foreign countries. At least a dozen countries, including Japan, Argentina, Pakistan, India, France, Bolivia and China (Taiwan), sent pilots to basic helicopter pilot training as well as instructor pilot upgrading. There was an Exchange Program with England's Royal Air Force and the Royal Australian Air Force for a 2-year tour by the Exchange pilots. U.S. Marine Corps pilots flying the Sikorsky H-34 Choctaw were given a short course in high altitude mountain flying techniques. Four RAAF helicopter pilots also received several hours of mountain indoctrination on their way from UH-1 Huey training at Fort Rucker and returning to Australia to fly their own "Hueys". From 1958 through 1965, the Helicopter School trained over 1252 USAF and 384 foreign helicopter pilots.

In support of the Air Rescue Service, which was seeking a better performing aircraft for combat search and rescue missions in Southeast Asia, the Helicopter School also conducted Lime Light 36, an escalated training program to provide crews for the Sikorsky HH-3E helicopter then deploying. Between August 23 and September 29, 1965, crews and support personnel trained as a unit at Stead. On September 30, 117 men and six HH-3Es deployed to Udorn Royal Thai Air Force Base, Thailand, and integrated with the three HH-43 crews of Detachment 5, 38th Air Rescue Squadron.

Part of the School included the Instructor Training (IT) Section of the Squadron. Experienced line pilots assigned to the squadron to be instructors had to be indoctrinated into the standardized techniques and grading procedures used in the school. This sometimes required some rethinking on the part of the new instructors that had been used to doing it "their way" when in the field. They were reminded about how they handled the controls when they had only 5 hours of helicopter time and relate it to their students. Standardized procedures were necessary for scoring of the student's progress and if a change of instructors might be required.

The Helicopter School was tasked with other missions. From February through July 1962, eleven pilots and six H-21B helicopters where airlifted by C-124 Globemaster aircraft to Christmas Island, South Pacific in support of Operation Dominic atomic tests. They would provide personnel airlift and search and rescue. They also conducted recovery of rocket nose cones shot through the clouds of an atomic device detonation by Research agencies. This required entering ground zero within 20 minutes of detonation and flying 15–25 mi (24–40 km) over the shark infested Pacific Ocean without any flotation device on the helicopter. All nose cones were successfully recovered.

In 1960 and again in 1964, helicopters were provided to NASA's Astronaut Desert Survival Training Site near Naval Air Station Fallon, Nevada.

In 1966, Stead AFB was closed, the airfield transferred to the City of Reno and the housing facilities sold to private individuals. The airfield is now Reno Stead Airport. In the 1960s and 1970s the airfield was used as a flying school by the Ag Aviation Academy, which was owned by the Lear organisation. Students were housed in the former married quarters of the Air Force Base.