Cross Gates
This article is about the English conurbation/suburb: for other uses, see Crossgates (disambiguation).

Cross Gates (also spelt as Crossgates) is a large suburb in east Leeds, West Yorkshire, England. It is situated between Seacroft and Swarcliffe to the north, Whitkirk and Colton to the south, Killingbeck to the west and Austhorpe to the south east. Manston and Pendas Fields are generally regarded as part of Cross Gates.

The suburb is 4 mi (6 km) to the east of Leeds city centre and lies in the LS15 Leeds postcode area. Cross Gates is popular with local shoppers as an alternative to Leeds city centre as it contains its own shopping centre - the Cross Gates Arndale Centre now known as the Crossgates Shopping Centre - complete with branches of some major High Street traders, in addition to many more independent shops and local library services. 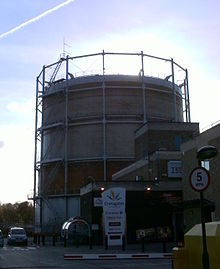 Cross Gates means "crossroads" from Old English cros "cross" (as in Crossens) and Old Norse gata "street, gait" (not 'gate'). The name was recorded as Crosget in 1129. Cross Gates was originally part of Austhorpe, as were Colton and Barrowby, which is indicated through various streets in Cross Gates beginning with "Austhorpe".

The worst tragedy ever to happen within Leeds (in terms of fatalities) was the Barnbow tragedy of 5 December 1916. 35 workers (all women aged 14 or over) were killed in the Barnbow Munitions Factory, which later became ROF Barnbow. The plant employed 16,000 workers, from Leeds, Selby, Wakefield, Tadcaster and Wetherby and had its own railway station to cope with the daily influx of workers. The railway station had an 850-foot (260 m) platform and 38 special trains from surrounding towns and cities. An explosion from Hall 42 killed 35 workers and mutilated many more. Mechanic, Mr William Parking was presented with an engraved silver watch for his bravery in saving factory workers during the incident.[2] 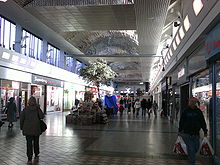 The interior of the Cross Gates centre. 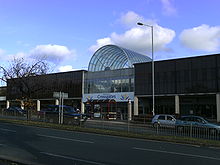 The demolition of Gas holder Number Two at the Cross Gates Gasworks made way for a shopping centre in Cross Gates as some felt that Cross Gates was badly lacking in amenities. This led to the building of the Cross Gates Arndale Centre. It opened on 21 September 1967 and was the first indoor "American-style" shopping mall in England. It was situated on the old marshalling yards which were behind what is now the parade of shops at the bottom of Station Road, just north of the Station Pub. Marshall Street, Terrace and Avenue get their names from this marshalling yard. Poplar Avenue and Chestnut Avenue were built later on land that had a spring running through it which explained the gap in the Marshalls. In the mid 80's it was renamed Cross Gates Shopping Centre and was then renamed to Crossgates in January 2005 as part of new ownership and re-branding. This is a large indoor shopping centre (approximately 200,000 sq.ft) containing retailers such as Tesco Metro, Peacocks, Newlook, Select, Iceland, Wilkinson, Home Bargains, Superdrug and Bon Marche. There is also a LB's situated upstairs, Flavours Cafe, and several banks and building societies with almost 60 stores in total. The Centre is an 'L' shape, with both legs being approximately equal in length. The Centre is single storey, except for the central part where there is a second storey containing LB's cafe and external unit East of India restaurant. The barrelled roofs at the Station Road and Austhorpe Road entrances were added several years after the shopping centre's construction in 1967 - they were refurbished in 2001. There have been many small-scale renovations in the Centre since its construction, including the car parks, which are operated on a ticket-on-entry and pay-on-foot system. The Centre is bright, clean, modern and well kept.

Other shopping facilities in Cross Gates are found along Austhorpe Road. Cross Gates' main supermarket was originally a Fine Fare next to the Methodist Church on Austhorpe Road, and then the GEM supermarket (formerly the Regal Cinema which was demolished for GEM to be built) which later became an Asda on the western side of the roundabout where the Ring Road meets Cross Gates Road. This then became 'Questword' supermarket and is now Mecca Bingo. There are also nearby shopping facilities in Halton (Newly built Lidl) Seacroft (the Seacroft Shopping centre, with a large Tesco Extra) and Colton (the Colton Retail Park), which has a Sainsbury's and an Argos.

The area's housing ranges from detached houses, semi-detached houses and terraced houses. More recently a block of new low-rise flats has been built opposite the Crossgates Shopping Centre, and apartments are being sold and rented at very high prices. Austhorpe Road and the areas surrounding Marshall Street are made up largely of Victorian through terraces. There are some upmarket Victorian villas around Tranquility Avenue. 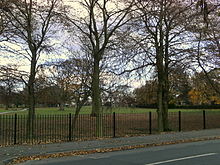 Manston Park is a large park in Cross Gates with football pitches, a bowling green, tennis courts and a playground.

Cross Gates railway station is on the Leeds to Selby line, now part of the "York & Selby Lines". It is a well used stop for residents commuting to Leeds or York city centres. In June 2006 Cross Gates won the award for "Best Kept Railway Station" in all of Yorkshire, having made major strides in the refurbishment of the station. Cross Gates is also close to the A64 dual carriageway and the M1. The A6120 Leeds Outer Ring Road "Station Road" is the main road through the area.

A Royal Ordnance Factory, ROF Leeds, was built at Barnbow, off Manston Lane, producing guns & ammunition for the army and navy. The building was bought by Vickers Defence Systems and produced the Challenger 2 tank before it closed in 2004. The bus manufacturer Optare, formerly "Charles H. Roe Ltd", also have a factory on Manston Lane, and the haulage company J Long & Sons are based on Sandleas Way.

Recently a sculpture composed of 3 large metal gates arranged in a triangle configuration has been erected on Crossgates roundabout (opposite to the library). The sculpture is meant to represent Crossgates metaphorically, each gate having a large 'X' in steel in its design to reflect the history of the town's name. Local residents have expressed different views on the structure, some finding it an asset to the area, others finding it an eyesore and a ridiculous waste of space on what could have and has been a rather handsome roundabout planted with many flowers and a well kept grassy area.