In music, a cross-beat or cross-rhythm is a form of polyrhythm.

Cross-rhythm. A rhythm in which the regular pattern of accents of the prevailing meter is contradicted by a conflicting pattern and not merely a momentary displacement that leaves the prevailing meter fundamentally unchallenged.—New Harvard Dictionary of Music (1986: 216).[1]

The term cross rhythm was introduced in 1934 by Arthur Morris Jones.

In Sub-Saharan African music traditions cross-rhythm is the generating principle; the meter is in a permanent state of contradiction. Cross-rhythm was first explained as the basis of sub-Saharan rhythm in lectures by C.K. Ladzekpo and the writings of David Locke.

At the center of a core of rhythmic traditions within which the composer conveys his ideas is the technique of cross-rhythm. The technique of cross-rhythm is a simultaneous use of contrasting rhythmic patterns within the same scheme of accents or meter. . . By the very nature of the desired resultant rhythm, the main beat scheme cannot be separated from the secondary beat scheme. It is the interplay of the two elements that produces the cross-rhythmic texture."—Ladzekpo (1995)[3]

From the philosophical perspective of the African musician, cross-beats can symbolize the challenging moments or emotional stress we all encounter. Playing cross-beats while fully grounded in the main beats, prepares one for maintaining a life-purpose while dealing with life’s challenges. Many sub-Saharan languages do not have a word for rhythm, or even music. From the African viewpoint, the rhythms represent the very fabric of life itself; they are an embodiment of the people, symbolizing interdependence in human relationships.—Peñalosa (2009: 21)[6]

Cross rhythms can easily be produced by two or more musicians, however producing this effect on one instrument by one musician can be very challenging. Not many western instruments are capable of easily doing this. Because of the great importance of cross rhythms in African music several instruments have evolved there that are especially adaptive for accomplishing this. The structure of these instruments are made to facilitate the creation of cross rhythms. They organize the notes in a uniquely divided alternate array – not in the linear bass to treble structure that is common to so many western instruments such as the piano, harp, xylophone, etc. 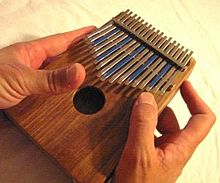 The West African kora is another such cross rhythm adaptive instrument. It is in the double harp-lute family of instruments and it also has this separated double tonal array structure.

The Gravikord a new American instrument closely related to both the African kora and the kalimba was created in the latter 20th century to also exploit this adaptive principle in a modern electro-acoustic instrument.[7]

Doussn'gouni is another adaptive African instrument similar to the kora but of lighter construction with fewer strings. It also has a double array structure of notes.

On these instruments one hand of the musician is not primarily in the bass nor the other primarily in the treble, but both hands can play freely across the entire tonal range of the instrument. Also the fingers of each hand can play separate independent rhythmic patterns and these can easily cross over each other from treble to bass and back, either smoothly or with varying amounts of syncopation. This can all be done within the same tight tonal range, without the left and right hand fingers ever physically encountering each other. These simple rhythms will interact musically to produce complex cross rhythms including repeating on beat/off beat pattern shifts that would be very difficult to create by any other means. This characteristically African structure allows often simple playing techniques to combine with each other and produce polyrhythmic music of great beauty and complexity.

Three-over-two (3:2) The cross-rhythm three-over-two (3:2) or hemiola, is the most significant rhythmic ratio found in sub-Saharan rhythm. The following measure is evenly divided by three beats and two beats. The two cycles do not share equal status though. The two bottom notes are the primary beats, the ground, the main temporal referent. The three notes above are the secondary beats. Typically, the dancer's feet mark the primary beats, while the secondary beats are accented musically.

In traditional European ("Western") rhythms, the most fundamental parts typically emphasize the primary beats. By contrast, in rhythms of sub-Saharan African origin, the most fundamental parts typically emphasize the secondary beats. This often causes the uninitiated ear to misinterpret the secondary beats as the primary beats, and to hear the true primary beats as cross-beats. In other words, the musical "background" and "foreground" may mistakenly be heard and felt in reverse.—Peñalosa (2009: 21)[8]

Here is the 3:2 cross-rhythm shown within its proper metric structure.

In some European art music cross-rhythm periodically contradicts the prevailing meter. For example, cross-rhythm is heard in the first few minutes of Beethoven's third Symphony and in the first movement of Brahms's Violin Concerto. Concerning the use of a two-over-three cross-rhythm in Beethoven ‘s sixth quartet in B flat, Ernest Walker says:

The New Harvard Dictionary of Music calls swing (jazz performance style) "an intangible rhythmic momentum in jazz," adding that "swing defies analysis; claims to its presence may inspire arguments." The only specific description offered is the statement that "triplet subdivisions contrast with duple subdivisions."[12] The argument could be made that by nature of its simultaneous triple and duple subdivisions, swing is fundamentally a form of polyrhythm. However, the use of systematic cross-rhythm in jazz did not occur until the second half of the twentieth century.

In 1959 Mongo Santamaria recorded "Afro Blue," the first jazz standard built upon a typical African 3:2 cross-rhythm.[13] The song begins with the bass repeatedly playing 3 cross-beats per each measure of 6/8 (3:2).

The great jazz drummer Elvin Jones took the opposite approach, superimposing two cross-beats over every measure of a 3/4 jazz waltz (2:3). This swung 3/4 is perhaps the most common example of overt cross-rhythm in jazz.[14] In 1963 John Coltrane recorded "Afro Blue" with Elvin Jones on drums.[15][16] Coltrane reversed the metric hierarchy of Santamaria's composition, performing it instead in 3/4 swing (2:3).

In recent decades jazz has incorporated many different types of complex cross-rhythms, as well as other types of polyrhythms.