"Peter's Progress" is the sixteenth episode and the season finale of the seventh season of Family Guy. It originally aired on Fox in the United States on May 17, 2009. In the episode, a psychic reads Peter's palms and discovers he led a fascinating past life as Griffin Peterson, a dignified gentleman in 17th century England, who was the original founder of Quahog.

The episode was written by Wellesley Wild and directed by Brian Iles. It received mixed reviews from critics for its storyline and many cultural references. According to Nielsen ratings, it was viewed in 7.33 million homes in its original airing. The episode featured guest performances by John Ross Bowie, Erik von Detten, Brody Hutzler, Derwin Jordan, Keri Lynn Pratt, David Pressman, Josh Radnor, Martin Savage, Jason Segel, Alexander Siddig and Neil Patrick Harris, along with several recurring guest voice actors for the series.

Cleveland introduces his Jamaican cousin, Madame Claude, to his friends, saying she is a psychic, and offers to have her read their palms and determine past lives they have had. Madame Claude then determines that Joe was once an octopus whose tentacles were bitten off by a shark, and Quagmire was Jack the Ripper. When Claude reads Peter's palm, she discovers that he was Griffin Peterson, the supposed founder of Quahog. Most of the episode follows the story of this past life, the main characters therein having the appearance of regular Family Guy characters.

In 17th century England, Griffin proposes to the love of his life, Lady Redbush (Lois). The ruthless King Stewart III (Stewie), however, spots Redbush while strolling through town and decides he must be the one she should marry. While Griffin is on the way to his wedding, Stewart secretly kidnaps and exiles him to the New World. As Lady Redbush waits in growing angst, Stewart walks into the church. He tells Lady Redbush that Griffin is dead, proceeding to marry her himself.

Upon reaching the New World, Griffin establishes the colony of Quahog, which eventually grows into a thriving settlement, and moves on with his life, even marrying another woman (Meg). Redbush, on the other hand, suffers a dull, sexless marriage with King Stewart, and continues to lament Griffin's supposed death until King Stewart's jester (Brian) reveals the truth to Redbush. Redbush immediately departs for Quahog and happily reunites with Griffin, who has grown irritated with his current wife and "divorces" her by shooting and killing her with a musket. Six months later, King Stewart learns that Redbush is gone, and he makes his way to Quahog to reclaim his wife, kill Griffin, and terrorize the colony. Upon being discovered by Stewart's Cockney first lieutenant (Chris), Griffin threatens to kill the officer, while Stewart threatens to kill Redbush. After exchanging threats without getting anywhere, Griffin and Stewart decide to settle their dispute with a talent show, with the winner winning Lady Redbush's hand in marriage, and ownership of the town of Quahog. For his act, King Stewart steals his jester's mostly unfunny jokes about his Aunt Frida. However, Griffin and his colonist friends (featuring Quagmire, Joe, Cleveland, Mort, and Seamus) effectively steal the show with a techno-rock number from Revenge of the Nerds, beating Stewart. Griffin and Redbush remain in Quahog to live happily ever after. 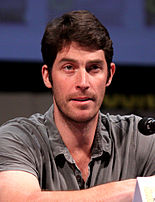 Writer John Viener provided the voice of Madame Claude in this episode.

The episode was written by Wellesley Wild and directed by Brian Iles. The live action sequences used throughout the episode to promote supposed shows on Fox was directed by Bones director Steve Beers.[1] The night the episode aired, the "Animation Domination" block was co-hosted by an animated version of rapper Eminem and Stewie Griffin.[2] Eminem, who provided his own voice, said that it was a "thrill to work with Stewie" and that he is a "big fan of talking babies and their humor".[3]

When Madame Claude tells everyone who they were in a past life, she reveals that Quagmire was Jack the Ripper.[5] King Stewart III orders to kill the cast of How I Met Your Mother after he is displeased with their performance.[6] Griffin Peterson's act in the talent show is a reference to the act the Lambda Lambda Lambdas perform at the homecoming in the 1984 film Revenge of the Nerds.[7] As a running gag throughout the episode, Fox promos appear on the bottom of the screen with made up shows including Shovin' Buddies, Slowly Rotating Black Man, and Cross-Armed Opposites, parodying Fox advertising.[6][5] Griffin says that he is "the happiest guy in the world because he's got a girl and is 290 years away from the films of Kevin Smith".[5] A clip is shown of Madonna celebrating her sixteenth birthday, suggesting she is over 300 years old.[7] During King Stewart's invasion of the settlement the music and lyrics are identical to that of Mel Brooks' Blazing Saddles, with Rock Ridge changed to Quahog. A lady says of King Stewart, "I didn't vote for him," alluding to Monty Python and the Holy Grail.

In its original airing in the United States, "Peter's Progress" was watched by 7.33 million homes, which was up from the previous episode, and was the most watched show in the "Animation Domination" block, beating the season finales of The Simpsons, American Dad! and King of the Hill.[8] It acquired a 3.7 rating in the 18–49 demographic, finishing third in its timeslot after the season finales of Survivor: Tocantins and Desperate Housewives.[8]

The episode received mixed reviews from critics. Ahsan Haque of IGN said that "Family Guy has never really done anything particularly special for the last episode of any season [...] and despite the obvious efforts to increase the animation quality and try to tell a complete story in this episode, it didn't turn out to be the winning effort that will keep fans eagerly awaiting the show's return next season".[7] Todd VanDerWerff of The A.V. Club gave the episode a D, and called it an "unfortunate and unfunny flashback [...] with lots of incest gags [that] was genuinely queasy-making, but not in a way that made anyone laugh from the shock of recognition or anything like that", but said that Family Guy can be "damn funny when it wants to be", referring to the Fox promos that take up the bottom quarter of the screen.[9] Robin Pierson of The TV Critic gave the episode a positive review, stating: "Good fun story, good fun jokes", but said that the end "felt flat" because of the Revenge of the Nerds music sequence.[6]