Croc: Legend of the Gobbos

Croc: Legend of the Gobbos

Croc: Legend of the Gobbos (also known as simply Croc, or in Japan as "Croc! Pau-Pau Island" (クロック!パウパウアイランド)) is a platform video game published by Fox Interactive and developed by Argonaut Software for the PlayStation, Sega Saturn, and GameBoy Color. It was released on September 29, 1997 in the North America. It follows main protagonist Croc, and his attempts to rescue the furry creatures known as Gobbos from the main antagonist, Baron Dante.

The Gobbo King Rufus was watching the sunset when he noticed a small basket in the sea, containing a small, screaming baby crocodile. The Gobbos begin to raise him and train him to become one of their own. Croc mostly ate buckets of peas when raised by the Gobbos. Croc eventually grew to twice the size of a normal Gobbo. All is peaceful until one day, a Gobbo shouts out a warning... " Dantinis!". Suddenly, the evil Baron Dante arrives and invades Gobbo Island with the help of his demon rascals, Dantinis. He imprisons many of the Gobbos, most notably their King, whom he keeps in a steel cage within his castle island. Before the Gobbo King is taken, he hits a magical gong that summons a yellow bird called Beany. Beany causes Croc to shrink before whisking him away to safety. Croc then goes on a quest to free all the Gobbos and defeat the evil Baron Dante himself.

Croc is a free-roaming game title, with Croc's movement differing slightly depending on whether players use the directional pad or the analogue controller to control him. His main moves consist of a tail whip attack that can temporarily destroy enemies, and a hit drop used for smashing open crates. Croc also possess the ability to swim in select levels. Throughout the game Croc collects crystals which serve as health in a similar fashion to golden rings in Sonic the Hedgehog, meaning the player will lose a life if hit without holding any crystals in their inventory. Crystals retained at the end of a level are stored, with Croc gaining an extra life for every 100 he collects.

Progressing through the levels involves finding and hitting the Beany Gong at the end of the level to move onto the next, facing two bosses during each island. However, to fully complete the game, Croc has to rescue the captured Gobbos throughout each level. Each level contains six Gobbos, including one hidden behind a door at the end of the level. This Gobbo can only be released by collecting five coloured crystals throughout the level. Collecting all the Gobbos before a boss level unlocks an extra level in which a Jigsaw Piece can be earned. When the player collects all of these pieces, a new island is opened up, leading to the game's final boss, Baron Dante in crystal form.[2]

The music for Croc: Legend of the Gobbos was composed by Justin Scharvona.[3] Richard Joseph was also involved. 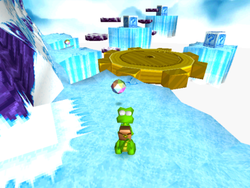 Screen shot of gameplay. In this shot, Croc is on the snowy island, and in front of Croc there is a collectable gem which acts as his health.

Islands
There are four standard islands in the game, each of which has a unique theme. Starting with the lava themed island, then progressing on to the snow, the desert, and castle themed islands respectively. A secret island is unlocked after the player collects all Gobbos and Jigsaw pieces in the game.

Each of the four standard islands contain six standard stages, two boss stages and two bonus stages, as detailed below.

Boss Stages
A boss stage comes after every set of three levels. Boss stages contain no Gobbos or Coloured Crystals. However, each stage does contain the standard crystals, of which there are always 50.

Secret Island
If the player collects all eight jigsaw pieces in the game they gain access to the Secret Island, which consists of five levels. This island contains four stages and a final boss.

The four stages are themed in-order of the original standard island themes and consist of parts of the stages from those islands put together as a new stage. They contain more enemies than before and are more difficult. There are no Gobbos or Colored Crystals to collect and the only aim is to make it to the end of each stage.