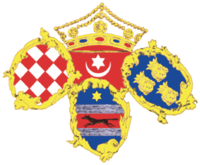 The heraldic standard of the Croatian ban in the 19th century included the historical coats of arms of Croatia, Slavonia and Dalmatia

Ban of Croatia (Croatian: Hrvatski ban) was the title of local rulers and after 1102 viceroys of Croatia. From earliest periods of Croatian state, some provinces were ruled by Bans as a rulers representative (viceroy) and supreme military commander. In the 18th century, Croatian bans eventually become chief government officials in Croatia. They were at the head of Ban's Government, effectively the first prime ministers of Croatia. The institution of ban in Croatia persisted until the 20th century.

South Slavic ban (Croatian pronunciation: [bâːn], with a long [a]) is a result of the contraction from the earlier form bojan. The long form is directly attested in 10th-century Constantine Porphyrogenitus' book De Administrando Imperio as βο(ε)άνος, in a chapter dedicated to Croats and the organisation of their state, describing how their ban "has under his rule Krbava, Lika and Gacka"[1].

References from the earliest periods are scarce, but history recalls the Croatian bans Ratimir in the 9th century (827, under Bulgarian sway) and Pribina in the 10th century (in 949 and in 970).

The meaning of the title was elevated to that of provincial governor in the medieval Croatian state (for example, King Dmitar Zvonimir was originally a ban in 1065 serving under King Peter Krešimir IV).

After the Croats elected Hungarian kings as kings of Croatia in 1102, the title of ban acquired the meaning of viceroy - bans were appointed by the king, as his representatives in Kingdom of Croatia, heads of the Parliament and also as supreme commander of Croatian Army.

Croatia was governed by the 'viceregal' ban as a whole between 1102 and 1225, when it was split into two separate banovinas: Slavonia and Croatia. Two different bans were occasionally appointed until 1476, when the institution of a single ban was resumed. Most of bans were native nobles but some were also of Hungarian ancestry.

Most notable bans from this period were Pavao Šubić, Petar Berislavić.

Bans in the Croatian-Hungarian Kingdom

The following Bans of Croatia existed in the Kingdom of Hungary:

Parallel bans of Slavonia and Dalmatia

From 1225 to 1476 there were parallel bans of "the Croatia and Dalmatia" and of "the Whole of Slavonia":

After the death of King Louis I of Hungary, his consort Mary, Queen of Hungary of the House of Anjou took the throne, which led to Angevin Ladislaus of Naples claiming the Lands of the Crown of St. Stephen in 1390. A war erupted between forces loyal to Sigismund of Hungary and those loyal to Ladislaus.

During this time, Sigismund appointed Nikola II Gorjanski (who was also count palatine) the ban of Croatia and Dalmatia in 1392, Butko Kurjaković in 1394, and then again Gorjanski in the period 1394–1397. Ladislaus in turn appointed his own bans, including Hrvoje Vukčić Hrvatinić. In 1409, this dynastic struggle was resolved when Ladislaus sold his rights over Dalmatia to the Republic of Venice.

Bans of Croatia, Slavonia and Dalmatia

During the period of separate titles of ban, several persons held both titles, and from 1476 onwards titles of Ban of Dalmatia and Croatia and Ban of Whole of Slavonia are again united in the single title of Ban of Croatia, Slavonia and Dalmatia: 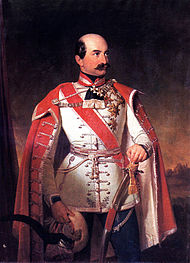 The title of ban persisted in Croatia after 1527 when the country became part of the Habsburg Monarchy, and continued all the way until 1918.

Among the most distinguished bans in Croatian history were the three members of Šubić/Zrinski family - Nikola Šubić Zrinski and his great-grandsons Nikola Zrinski and Petar Zrinski. Also there are two notable Erdödys: Toma Erdödy, great warrior and statesman in one person, and Ivan Erdödy, to whom Croatia owes much for protecting her rights against the Hungarian nobility, his most widely known saying in Latin is Regnum regno non praescribit leges, "a kingdom may not impose laws to a(nother) kingdom".

In the 18th century, Croatian bans eventually become chief government officials in Croatia. They were at the head of Ban's Government, effectively the first prime ministers of Croatia. The most known bans of that era were Josip Jelačić, Ivan Mažuranić and Josip Šokčević

Bans in the Habsburg Monarchy

The Habsburg dynasty ruled Kingdom of Croatia and Slavonia between 1527 and 1848, and appointed the following bans:

Bans of the interregnum during the Revolutions of 1848

Croatia was a Habsburg crown territory between 1849 and 1867[2] during which time the following bans were appointed:

Bans in the Austro-Hungarian Empire

Croatia was returned to Hungarian control in 1867 when the Habsburg Empire was reconstituted as the dual monarchy of Austria-Hungary. Between then and 1918 the following bans were appointed:

Ban was also the title of the governor of each province (called banovina) of the Kingdom of Yugoslavia between 1929 and 1941. The weight of the title was far less than that of a medieval ban's feudal office. Most of Croatian territory was divided between Sava and Littoral Banovina, but also some parts were outside this provinces.

In 1939 Banovina of Croatia was created with Cvetković-Maček agreement as a unit of limited autonomy. It consisted of Sava and Littoral Banovina along with smaller parts of Vrbas, Zeta, Drina and Danube Banovina's. Ivan Šubašić was appointed for the Ban of Banovina of Croatia until the collapse of Kingdom of Yugoslavia in 1941. Šubašić was also the last person who held the position of Croatian Ban.

Bans in the Yugoslav Kingdom

Following a brief period of self-rule at the end of World War I, Croatia was incorporated into the Kingdom of the Serbs, Croats and Slovenes in 1918, under the Karađorđević dynasty.

In 1929, the new Constitution of the Kingdom renamed it Kingdom of Yugoslavia and split up Croatia between several banovinas (provinces):

In 1939, the Banovina of Croatia was created with Cvetković-Maček agreement as a unit of limited autonomy within Kingdom of Yugoslavia. It consisted of Sava and Littoral Banovina along with smaller parts of Vrbas, Zeta, Drina and Danube Banovina's.