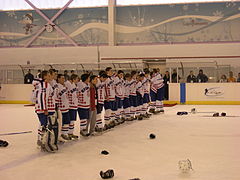 The Croatian under-20 team, who won the 2009 World Junior Ice Hockey Championships - Division II Group B

The Croatian men's national ice hockey team represents Croatia in IIHF ice hockey competitions. It is organized by the Croatian Ice Hockey Federation. As of 2010[update] the team is ranked 26th in the world by the IIHF. At the 2012 Men's World Ice Hockey Championships Croatia will compete in Division II.