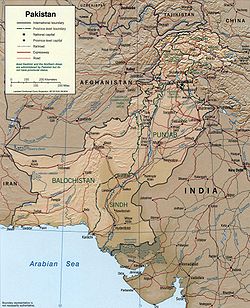 Pakistan studies curriculum (Urdu: مطالعہ پاکستان Muṭāla e-Pākistān) is the name[1][2] of a curriculum of academic research and study that encompasses the culture, demographics, geography, history, and politics of Pakistan. The subject is widely researched in and outside the country. Several universities in Pakistan have departments and research centres dedicated to the subject, whereas many independent research institutes carry out multidisciplinary research on Pakistan Studies. There are also a number of international organisations that are engaged in collaborative teaching, research, and exchange activities on the subject.

As the second largest South Asian country after India, and one of the major actors in the politics of the Muslim world, the subject remains at the focal point of multidisciplinary studies.[3] Various universities in the United States and the United Kingdom have research groups busy in academic and research related activities on Pakistan Studies. One such example is the American Institute of Pakistan Studies (AIPS) at the University of Wisconsin–Madison, established since 1973. An affiliate of the Association for Asian Studies, the institute regularly holds events such as seminars, public lectures, and conferences on various topics related to the Pakistan Studies. It also offers annual international fellowships for the research on materials relating to the history and culture of Pakistan.[4] In April 2004, AIPS organised an international workshop on the Salt Range Culture Zone of Pakistan at the University of Pennsylvania and the University of Wisconsin–Madison.[5] The event provided the international audience with an opportunity to understand the archaeological and architectural heritage of the country.

Another academic initiative is the British Association for Pakistan Studies that was established in 1989. The forum has wider views on the topic than the common historiographical contexts, and encourages research and dialogue that involves both the academics and practitioners. The forum acknowledges that the topic has not received the sort of individual attention that the country and its society deserve, and therefore strives to increase international awareness on the subject.[6]

There are also larger multinational and multicultural organisations that provide pluralist platforms for the discussions and debates on Pakistan Studies within the wider contexts of Asia. The Asia Foundation, for example, has launched specific projects for a diverse understanding of the subject through actions on local governance, civil society, human rights, and healthcare[7] as well as political, economic, judicial, and foreign relations.[8]

Pakistan Studies is one of the few heritage subjects[9] for O-level[10] and IGCSE qualifications as governed by Cambridge International Examinations. The syllabus covers Pakistan's history, cultural heritage, national identity, geography, economy, and environment, as well as the challenges and opportunities faced by the country.[11]

In Pakistan, the subject is one of the three compulsory courses (along with the Urdu and English-language courses) at the Secondary School and Higher Secondary school levels of education.[12] It is also taught as a degree course at most of the Social Science departments in many universities. There are also university departments dedicated to the education and research in Pakistan Studies.[13]

Many of these departments provide degree programmes for in-depth studies, as well as research facilities for M.Phil and PhD scholars. Courses broadly range from the history, politics and linguistics to the country's geography and economics, and from foreign affairs and religion studies to the social relations and literature.[14] The focused attention on the subject at higher education levels means a wider scope for the research, thus making the subject an increasingly interdisciplinary one.

Following the extensive media debate and academic reiteration on the need to update the curricula at all levels of education, the Government of Pakistan carried out measures in 2006 to improve the national curriculum for Pakistan Studies.[1][2] These actions were based on the earlier studies and recommendations by the former University Grants Commission in 2001[15] and then later by the Higher Education Commission of Pakistan (HEC) in 2003[16] The new curriculum, for secondary and higher school certificates, was implemented from 2007 to include the political history from pre-partition to the modern times, international relations, evolution of the country's economy and demographics, diversity of regional cultures and languages, and the status of religious groups with specific reference to Muhammad Ali Jinnah’s views that he expressed at his speech of 11 August 1947[2][17]. It also eliminates prejudice against non-Muslims, efforts have been made to exclude all such material that promotes prejudice against the non-Muslims of pre-partition India[1][2]. Subsequently, the need was also realised to standardise the subject framework across the university degrees. As a result, in 2007, the Curriculum Division at the HEC revised the syllabus for the degrees of Bachelor of Science and Master of Science in Pakistan Studies.[18] The new higher education course outline goes beyond the literature, politics, history and culture, and addresses the contemporary challenges of urbanisation, foreign policy and environment.[19] The recommendations also imply the needs for training the teachers to improve their communication skills in accordance with the new structures.