This species is a resident breeder in open woodland habitats in tropical west Africa. It lays two or three eggs in a tree platform nest.

These are common, noisy and conspicuous birds, despite lacking the brilliant colours of relatives such as the Violet Turaco. They are 50 cm long, including a long tail. Their plumage is mainly grey above spotted with brown. The head, erectile crest, neck and breast are brown streaked with silver. The underparts are whitish, heavily streaked with brown. 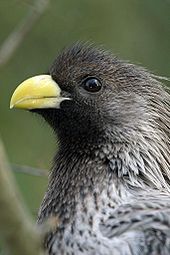 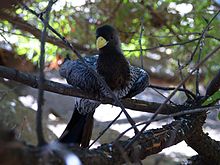 Western Plantain-eater has a thick bright yellow bill, and shows a white wing bar in flight. The sexes are identical, but immatures have a black woolly head without silver streaking.

This bird is similar to the closely related Eastern Plantain-eater. The latter species has white tail bars, and lacks the chest bars and dark wing feather shafts of its western relative.

This species feeds on fruit, especially figs, seeds and other vegetable matter.