Mercer was born and raised by a single mother in Cleveland, Ohio.[7] He attended North Ridgeville High School, where he played football and basketball, but wasn't able to continue to pursue a career in either of them without an athletic scholarship.[7] After graduation Mercer joined the United States Army in order to fund his college studies.[7] He ended up serving for five years, which included two tours of Iraq in the 101st Airborne Division as part of Operation Iraqi Freedom.[4][7]

During his second tour of Iraq, Mercer decided to pursue a career in professional wrestling and upon his return to the United States, entered the NWA Main Event wrestling school in Clarksville, Tennessee, where he was trained by Jeff Daniels.[7] He would make his professional wrestling debut in 2007, working for independent promotions in Nashville, Tennessee.[4][7] He would eventually make his debut also for NWA Main Event, starting a storyline feud with his trainer Jeff Daniels, and on June 3, 2010, won his first professional wrestling championship, when he defeated Matt Boyce for the NWA Mid-American Television Championship.[7][8]

On October 10, 2009, Mercer wrestled in a six–way preshow match at a Ring of Honor (ROH) event in Indianapolis, Indiana.[9] 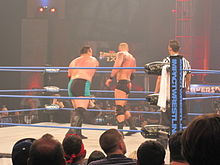 On September 8, 2010, Mercer wrestled in a tryout dark match for Total Nonstop Action Wrestling (TNA), in a losing effort against Jay Lethal.[10] This was followed by another dark match on November 15, in which Mercer was defeated by Stevie Richards.[11] On December 4, 2010, Mercer took part in the TNA Gut Check Challenge tryout workshop in Orlando, Florida and two days later wrestled his third dark match for the promotion, in which he defeated Neico.[12][13][14] On December 10, 2010, it was reported that TNA had signed Mercer to a contract.[12][15] He would make his televised debut on the December 30 edition of TNA Impact!, portraying Amazing Red's younger brother and being billed as Little Red.[2][3] The previous week Jeff Jarrett had defeated Amazing Red in his $100,000 mixed martial arts challenge series and upon hearing that he had a younger brother, challenged him to a match, expecting someone even smaller than the 5 ft 6 in (1.68 m) Red.[16] Mercer dominated his debut match, before Jarrett's security guards, Gunner and Murphy, pulled their boss out of the ring and prevented him from re–entering.[2][3][6] On the January 13 edition of Impact! Mercer, now renamed Crimson, returned, attacking Abyss backstage and promising that "they" would be coming to take out Immortal on February 3.[1] The following week, Crimson repeated his actions from the previous week, this time attacking A.J. Styles. Later that night, he saved Kurt Angle from Immortal by attacking Abyss with Janice, his nail-covered board, and sidelining him with a storyline injury.[17] On the January 27 edition of Impact!, Crimson explained that he was no longer by Amazing Red's side, because he had been given an offer he couldn't refuse. Later that night Crimson and Angle were placed in a seven–on–two handicap match against Immortal and Fortune members Jeff Jarrett, James Storm, Robert Roode, Kazarian, Rob Terry, Gunner and Murphy. The match ended with Jarrett pinning Angle for the win. Afterwards, Crimson and Angle were saved by the returning Scott Steiner.[18] On the February 3 edition of Impact!, Fortune turned on Immortal, revealing themselves as the "they" Crimson and Angle had been referring to.[19]

On the February 24 edition of Impact!, Crimson made his singles match debut in a win against the returning Magnus.[20] On the April 14 edition of Impact!, Abyss, who had returned from his injury three weeks earlier, took revenge on Crimson, interfering in his match and chokeslamming him onto a guardrail.[21] Crimson made his pay-per-view debut on April 17 at Lockdown, where he and Scott Steiner were unsuccessful in becoming the number one contenders to the TNA World Tag Team Championship in a four tag team steel cage match, which was won by Ink Inc. (Jesse Neal and Shannon Moore).[22] The following month at Sacrifice, Crimson defeated Abyss in a singles match to win the feud and keep his "undefeated streak" intact.[23] Crimson then moved on to feuding with Samoa Joe, stemming from the fact that during the past three weeks, Joe had on two occasions turned his back and walked away from the ring, after Abyss had blindsided Crimson, claiming that he had not needed anyone's help during his own 18 month undefeated streak in 2005 and 2006.[24][25][26] On June 12 at Slammiversary IX, Crimson continued his streak by defeating Samoa Joe.[27] The following week Crimson entered the Bound for Glory Series to determine the number one contender to the TNA World Heavyweight Championship and continued his undefeated streak against the likes of D'Angelo Dinero, Bobby Roode and Bully Ray, taking over the number one spot in tournament standings.[28][29][30] On August 7 at Hardcore Justice, Crimson extended his lead in the Bound for Glory Series standings by defeating number two ranked Rob Van Dam via disqualification.[31] After further extending his lead on the following edition of Impact Wrestling with a win in a four–way match against three Immortal members, Bully Ray, Gunner and Scott Steiner, Crimson was attacked by TNA World Heavyweight Champion Kurt Angle.[32] Crimson and Angle faced each other on the August 25 edition of Impact Wrestling, but the match ended in a disqualification, when Samoa Joe, who had previously vowed to ruin the Bound for Glory Series, attacked Crimson. The attack resulted in Crimson suffering a storyline ankle injury, which forced him out of the Bound for Glory Series.[33][34] Crimson returned via satellite on the September 15 edition of Impact Wrestling, announcing that he would return to the Impact Wrestling Zone in two weeks.[35] Crimson returned on the September 28 edition of Impact Wrestling, challenging Joe to a fight. During the fight, Joe slammed Crimson's injured ankle into a guardrail and locked him in a heel hook, before being run off by Matt Morgan.[36] The following week Crimson defeated Joe in his return match.[37] Crimson continued his undefeated streak on October 16 at Bound for Glory, defeating Samoa Joe and Matt Morgan in a three-way match.[38]

Outside of his career in professional wrestling, Mercer works as a personal trainer and attends classes in business management at Austin Peay State University.[7] 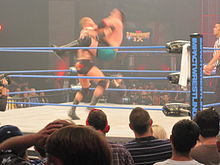 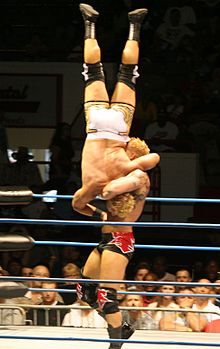