A fourth police force in London, the Ministry of Defence Police, do not generally become involved with policing the general public. Within the Home Office crime statistic publications Greater London is referred to as the London Region.

Generally, every area in London has different crime rates. Several areas have issues with crime, while many others are very safe.

Until the late 1990s crime figures for varying crime types were not released to the general public at individual police force level. The annual publication 'Crime in England & Wales' produced by the Home Office began to break the figures down to a smaller area in 1996.[1] Crime figures in England & Wales during the late 1990s and early 2000s were often misinterpreted in the media and scrutinised because of frequent changes in the way crimes were counted and recorded that lead to rises in the crime category 'Violence Against the Person'.[2]

Commenting on figures from 1 April 1998 onwards Jack Straw said "changes in the way crime statistics are compiled are in line with recommendations by senior police officers. They are intended to give a more accurate picture of the level of offences".[3] The largest increases were recorded in the Violence Against the Person category owing to the inclusion of Common assault figures to accompany other offence types within this category that include Assault occasioning actual bodily harm, Grievous bodily harm, Harassment, Murder, possession of offensive weapons and a selection of other low volume violent crimes grouped together by the Metropolitan Police as 'Other Violence'.

The change in counting rules, and the significant impact it had on violence against the person figures, was often misconstrued by the media as real increases. The rises in violence resulting from this were highly publicised on an annual basis.[4][5][6][7][8]

Today crime figures are made available nationally at Local Authority[9] and Ward level.[10] The Metropolitan Police have made detailed crime figures, broken down by category at borough and ward level, available on their website for the last 10 years.[11]

A detailed breakdown of the way crimes are counted are available from the Home Office website.[12] Recorded crime increased in England and Wales during most of the 1980s, reaching a peak in 1992, and then fell each year until 1998/99 when the changes in the Counting Rules resulted in an increase in recorded offences. This was followed by the introduction of the National Crime Recording Standard (NCRS)[13] in April 2002 which led to a rise in recording in 2002/03 and 2003/04, as the rules bedded-in within forces. Up until 1998 crime figures were collected to cover a Calendar year however this changed from 1998 when crime statistics began to be collated and grouped by Financial Year.

Crimes categorised as 'Violent Crime' by the Home Office are violence against the person,[2] robbery and sexual offences. 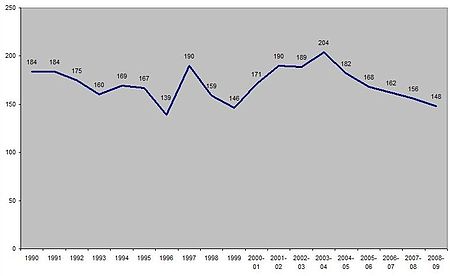 The distribution of homicide offences in London can vary significantly by borough. Between 2000/01 and 2008/09 there were 1,570 offences committed in London. This ranged from 123 in the London Borough of Lambeth to just 12 in Kingston upon Thames.

Measuring violent crime by borough made a perceived link between social disadvantage and crime, but borough perceptions have become incorrect and misinformed. The borough of Camden for example, contains some of the most prosperous areas on the planet, but also some with very high poverty levels - leading to a misconception of the borough by many people. 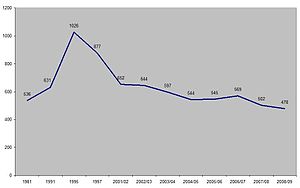 Following the changes introduced by the National Crime Recording Standard (NCRS) in 2002 the way assaults were categorised was dependent on injury therefore there was a significant jump in combined ABH and GBH nationally in 2002/03. Prior to NCRS minor injuries were counted as common assault although post NCRS any assault with injury would be categorised as ABH. Therefore looking at figures over time is of limited value as figures prior to 2002/03 are not comparable with the way certain violent crimes have been recorded since then. These changes were not reflected in the Metropolitan Police performance figures until 2004/05 when the rate almost doubled to 9.4 per 1,000 residents compared to 5.8 the previous year. In 2005/06 the rate of recorded ABH and GBH peaked both nationally and within the Metropolitan Police force area according to recorded statistics.

The British Crime Survey or BCS is a systematic victim study, currently carried out by BMRB Limited on behalf of the Home Office. The BCS seeks to measure the amount of crime in England and Wales by asking around 50,000 people aged 16 and over, living in private households, about the crimes they have experienced in the last year. The survey is comparable to the National Crime Victimization Survey conducted in the United States. The Home Office estimated that just 37% of violence with injury offences were reported to and recorded by police.

An advantage of the BCS is that it has not been affected by the changes in counting rules and the way crime is categorised because it is survey based. This makes it possible to observe national trends in crime over time. Crime in England & Wales 2008/09,[30] shows BCS violence with injury to have peaked in 1995 and declined steadily since then. Between 1995 and 2008/09 the BCS estimates that violence with injury offences decreased 53.6% across England & Wales.

Weapon enabled crimes are recorded by the Metropolitan Police when a weapon is used to assist a crime, e.g. a knife or gun enabled robbery. Recorded gun and knife enabled offences in London account for about 2% of total recorded crime. London Boroughs with the highest rates of gun and knife crime include Newham, Southwark, Hackney, Islington, Waltham Forest and Lambeth.[31] Gun enabled crime figures are displayed on the Metropolitan Police website at borough level expressed as financial year to date comparisons[32] but they are seldom made available for historical comparisons. Figures are available for calendar years 2000 to 2007[33] as shown in the table below.

Since 2000 there has been consistent fluctuations in the number of gun enabled recorded by the Metropolitan Police which peaked in 2003 when there were 4,444 recorded offences. The lowest number of offences recorded was potentially in 2008 where there were just 1,980 gun enabled crimes between December 2007 and November 2008, an unusually low figure in comparison to other years. Since then however gun enabled crime has increased 67% across London with 3,309 offences being recorded in the 12 months to November 2009.

Knife enabled crime figures are available from 2003 to 2007 and more recently monthly knife crime summaries are provided on the Metropolitan Police website showing financial year to date figures.[35] Knife enabled offences increased from 2003 to 2004 and from then on saw annual reductions until 2007. It was not possible to retrieve statistics for 2008 and 2009.

The Metropolitan Police a number of operations that concentrate on knife and gun crime. They include Operation Trident and Trafalgar which deal with fatal and non-fatal shootings across London, Operation Blunt which was initially launched across 12 boroughs in 2004 to tackle knife crime and subsequently rolled out across the forces 32 boroughs in 2005 after early successes.[36] Operation Blunt was re-launched as Operation Blunt II in 2008 with the aim of tackling serious youth violence.[37] In addition to this there is the Specialist Firearms Command formerly known as SO19. 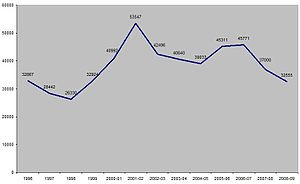 Robbery offending across London fell almost 20% between 1996 and 1998 from 32,867 to 26,330 offences. Following changes in counting rules of crimes and the later introduction of the National Crime Recording Standard offences of robbery rose both nationally and within London.[43] In London offences increased by 25% in 1999 compared with 1998. There was a 25% increase between 1999 and 2000/01 and a further 30% increase between 2000/01 and 2001/02 when the robbery rate in London peaked to 7.1 offences per 1,000 population. In March 2002 the government launched the 'Street Crime Initiative' with the aim of reducing robbery in the most affected police forces, including the Metropolitan Police. Nationally the 'Street Crime Initiative' achieved a reduction in robbery of 32% by March 2005.[44] In London during the same period robbery reduced by 27% from 53,547 in 2001/02 to 39,033 in 2004/05. After the initiative had finished robbery offences increased and stayed at a rate of around 6.0 per 1,000 for the next two financial years, however, there has now been a steady annual decline in robbery rates across London since 2006/07.

The increases in robbery were largely attributed to the rise in youth on youth robberies across London with particular focus around schools and transport interchanges and increased usage and ownership of items such as mobile phones, one of the most commonly stolen items. The increases that followed the end of the street crime initiative were thought somewhat to be a result of the increased mobility of young people when the introduction of oyster cards to provide under-16s free travel on London's transport network was introduced.[45]

Further information: Race and crime in the United Kingdom

In June 2010 The Sunday Telegraph, through a Freedom of Information Act request, obtained statistics on accusations of crime broken down by race from the Metropolitan Police Service.[n 1] The figures showed that the majority of males who were accused of violent and sexual crimes (including those subsequently acquitted) in 2009–10 were black. Of the recorded 18,091 such accusations against males, 54 percent accused of street crimes were black; for robbery, 59 percent; for gun crimes, 67 percent; and for sexual offences, 32 percent.[46]

Operation Trident was set up in March 1998 by the Metropolitan Police to investigate gun crime in London's black community after black-on-black shootings in Lambeth and Brent.[48]

Below are crime rate comparisons for London and the metropolitan districts of England in 2007/08 financial year.