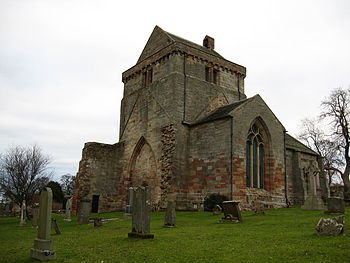 Crichton Collegiate Church is situated about 0.6 miles (0.97 km) south west of the hamlet of Crichton in Midlothian, Scotland. Crichton itself is 1.4 miles (2.3 km) west of Pathhead and 7.5 miles (12.1 km) south of Scotland's capital city, Edinburgh. The church is reached by leaving the A68 road at the north end of Pathhead and turning on to the B6367 minor road at Crichton on a single track lane signposted Crichton Castle. Before reaching the castle car park, on the left, is the church, situated at grid reference NT381616.

Crichton Church was founded on 26 December 1449 by William Crichton, 1st Lord Crichton, Lord Chancellor of Scotland "Out of thankfullness and gratitude to Almighty God, our Lord Jesus Christ, the Blessed Virgin Mary, St. Kentigern and All Saints", with the consent of his son, James of Frendraucht and confirmed on the 29 December by James Kennedy, Bishop of St Andrews. Like many other collegiate churches, Crichton was built for the use of the local lord, and a provost, eight prebendaries, two choir boys and a sacrist were appointed to pray for the souls of the Crichton family. The provost was granted the tiends and tithes of the prebends, the Rectory of Crichton and the Temple lands appertaining to Crichton.[1]

The church was built in a Gothic and Romanesque cruciform style with a large central tower; the nave was used as the place of worship for the poor people. This continued until the Scottish Reformation of 1560 when it was considered unusable. [2]

By 1569 it was being used as the parish kirk (church) and a minister, Adam Johnston, was ordained to lead the service.[1] By the 1580s, major restoration work began, though the nave was said to be ruinous, as it is to this day.[3] In 1641, by an Act of Parliament, Crichton Church was declared to be the parish church for all time.[1] Though there was more restoration and adaptation in 1729 it was considered to have been carried out "badly".[4] More work in the 1820s helped to bring the old church back to life,[3] but it was not until the end of the 19th century that the church was fully restored, by the Edinburgh architects Hardy & Wright.[4] Stained glass windows were installed at this time.[5]

The 'T' shaped remains are no longer used as a parish church and is in the care of the Crichton Collegiate Church Trust based in nearby Pathhead and is used for weddings and is available for visiting.[4] Crichton is category A listed building.[2]