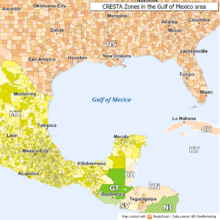 Map sample of the CRESTA system. It shows individual zones in the Gulf of Mexico region; within a zone the risk is for insurance considered to be equal.

CRESTA (Catastrophe Risk Evaluation and Standardizing Target Accumulations) was founded as a joint project of Swiss Reinsurance Company, Gerling-Konzern Globale Reinsurance Company, and Munich Reinsurance Company. CRESTA has set itself the aim of establishing a globally uniform system for the accumulation risk control of natural hazards - particularly earthquakes, storms and floods. Those risk zones are essentially based on the observed and expected seismic activity, as well as on other natural disasters, such as droughts, floods and storms. CRESTA zones regard the distribution of insured values within a region or country for easier assessment of risks. CRESTA Zones are the essential basis for reinsurance negotiation and portfolio analysis. Nowadays, CRESTA sets widely accepted standards apply throughout the international insurance industry. CRESTA zone information is used by most insurances for assessing the insurance rates they will charge.

While the acronym CRESTA stands for Catastrophe Risk Evaluation and Standardizing Target Accumulations, the name was derived from the name of the hotel (Cresta Hotel) where the founding meeting occurred, and the subsequent creation of a suitable acronym to correspond to the name.

CRESTA has set itself the aim of establishing a globally uniform system for the accumulation risk control of natural hazards - particularly earthquakes, storms and floods. Nowadays, widely accepted standards apply throughout the international insurance industry. CRESTA's main tasks are:

There is basically no risk that cannot be insured against, however it is difficult to assess how risky it is to give out insurance contracts to customers and to assess for insurance providers how high their rates should be. One main indicator for every insurance is the premiums they pay for their reinsurance. When applying for reinsurance the forms will often be based on the models provided by CRESTA. CRESTA (Catastrophe Risk Evaluating and Standardising Target Accumulations) is an independent group led by Munich Re and Swiss Re which promotes the accurate and efficient perils. CRESTA furthermore and most importantly, established a worldwide zone classification used within the insurance industry, the CRESTA Zones. The CRESTA Zones are defined for most of the world down to postcode level. CRESTA Zones are the basis for reinsurance negotiation and portfolio analysis.

CRESTA Zones are basically based on two facts. First, CRESTA Zones take into account the possibility of natural disaster for a region based on the 4 basic natural hazards: drought, flood, earthquakes and cyclones. Second, CRESTA Zones depend on the richness of a region. The higher the value of the settlements in a region, the more an insurance will have to pay for reconstruction in case of natural hazard. In order for an insurance to calculate the risk premium distribution for each natural disaster type CRESTA Zones will be taken into account.

In seismic risk analysis, for example, a successful loss estimation of insured and reinsured values depends on the seismic hazard analysis, on the vulnerability of facilities and on the ability to calculate the earthquake risk premium, also known as average annual loss (AAL). Some people consider CRESTA Zones to Insurance like fuel to a car. CRESTA is simply one of the biggest, if not the most comprehensive and most actual information resource for natural risks and hazards.

On the downside, CRESTA specific information is not available freely. CRESTA zone information can either be bought directly from CRESTA or bundled with map systems.