The Heads of Ayr Holiday Camp is a holiday camp located near Ayr in South Ayrshire, Scotland. It is currently run by Haven Holidays. When originally opened in 1946, it was named Butlins Ayr, but in 1987 was renamed Wonderwest World. Since being taken over by Haven Holidays it has been renamed Craig Tara. 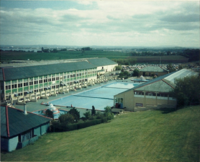 During the Second World War the Admiralty, who had already taken over his camp at Filey, asked Billy Butlin to construct two new camps; one in North Wales and the other in Scotland. Butlin found 85 acres (34 ha) on the coast neighbouring the Heads of Ayr.[1]

In 1946 after the war had ended, Butlin took back ownership of the camp from the Admiralty and Butlins Ayr was opened to the public after some reconstruction work.

Heads of Ayr holiday camp contained all of the tried and tested Butlins ingredients: the famous Butlins Redcoats, a funfair, early morning wake up, a dining hall (with the cheers going up when a waitress dropped a plate), indoor and outdoor swimming pools, a ballroom, a boating lake, tennis courts, a sports field (for the three legged and egg & spoon races and the donkey derby), table tennis and snooker tables, an amusement arcade, a medical centre, a theatre, arcades of shops, a chairlift system and a miniature railway.[2]

The camp continued to be successful, and in 1987 a £25 million investment programme was announced. Work began in 1988 with £12 million used to construct a new swimming pool and upgrade the accommodation. A further £13 million investment followed over the next 5 years. Once the renovations were completed the camp was renamed Wonderwest World.

In 1947 Butlin began work on a hotel on the site which shared the camp's resources. It was completed in 1948 and opened as the Heads of Ayr hotel.[3] The hotel continued to operate until the 1970s when it was closed and demolished.

On 17 May 1947 a railway station was opened for the use of the camp and the nearby hotel,[4] shortly before nationalisation and the formation of British Rail. It was closed again on 16 September 1968. 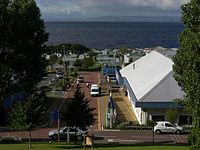 Craig Tara, seen in 2006. The building on the right is the main reception building. 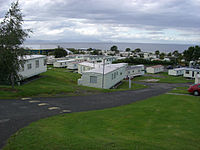 Most of the old chalets from the former Butlins site have now gone, replaced by caravans forming the current Haven site.

In 1999 the camp became part of Haven Holidays along with the Pwllheli camp as part of an internal reorganisation within Bourne Leisure who owned both Butlins and Haven. Since being taken over by Haven Holidays it has been renamed Craig Tara and the focus of operations has been transformed from predominantly chalet accommodation to mostly static caravan accommodation.

On 17 September 1988, 5 year old Stephen McKerron vanished from the camp whilst on holiday with his aunt and uncle. This led to the largest ever missing child hunt by Scottish Police, as 200 officers searched the camp and a six mile (10 km) radius from the camp. On Sunday the 2nd October Stephen's body was found outside the search area by Margaret MacLehose, the wife of Murray MacLehose. Despite a fatal incident inquiry finding Death by Natural Causes questions (as to how Stephen was able to walk so far by himself and whether he may have been transported by some unknown third party) remain.[5]