Peruvian art has its origin in the Andean civilizations. These civilizations rose in the territory of modern Peru before the arrival of the Spanish.

A detail of the Raimondi Stela. This stela was found out of its original placement at the ceremonial complex, Chavín de Huantar. It was cited by Pablo Picasso as an inspiration for his art.

Peru's earliest artwork came from the Cupisnique culture, which was concentrated on the Pacific coast, and the Chavín culture, which was largely north of Lima between the Andean mountain ranges of the Cordillera Negra and the Cordillera Blanca. Decorative work from this era, approximately the 9th century BCE, was symbolic and religious in nature. The artists worked with gold, silver and ceramics to create a variety of sculpture and relief carvings. These civilizations were also known for their architecture and stone sculpture.

The third century BCE saw the flowering of the urban culture, Moche, in the Lambayeque region. The Mochica culture produced impressive architectural works, such as the Huacas del Sol y de la Luna and the Huaca Rajada of Sipan. They were expert at cultivation in terraces and hydraulic engineering and produced original ceramics, textiles, pictorial and sculptural works.

Another urban culture, the Wari civilization, flourished between the 8th and 12th centuries in Ayacucho. Their centralized town planning was extended to other areas, such as Pachacamac, Cajamarquilla and Wari Willca.

Between the 9th and 13th centuries CE, the military urban Tiwanaku empire rose by the borders of Lake Titicaca. Centered around a city of the same name in modern-day Bolivia, the Tiwanaku introduced stone architecture and sculpture of a monumental type. These works of architecture and art were made possible by the Tiwanaku's developing bronze, which enabled them to make the necessary tools.

Urban architecture reached a new height between the 14th and 15th centuries in the Chimú Culture. The Chimú built the city of Chan Chan in the valley of the Moche river, in La Libertad. The Chimú were skilled goldsmiths and created remarkable works of hydraulic engineering.[citation needed]

The Inca Civilization, which united Peru under its hegemony in the centuries immediately preceding the Spanish conquest, incorporated into their own works a great part of the cultural legacy of the civilizations which preceded it. Important relics of their artwork and architecture can be seen in cities like Cusco, architectural remains like Sacsahuaman and Machu Picchu and stone pavements that united Cusco with the rest of the Inca Empire.

Peruvian sculpture and painting began to define themselves from the ateliers founded by monks, who were strongly influenced by the Sevillian Baroque School. In this context, the stalls of the Cathedral choir, the fountain of the Main Square[1] of Lima and a great part of the colonial production were registered. The first center of art established by the Spanish was the Cuzco School that taught Quechua artists European painting styles. Diego Quispe Tito (1611-1681) was one of the first members of the Cuzco school and Marcos Zapata (1710-1773) was one of the last.

Painting of this time reflected a synthesis of European and indigenous influences, as is evident in the portrait of prisoner Atahualpa, by D. de Mora or in the canvases of the Italians Mateo Pérez de Alesio and Angelino Medoro, the Spaniards Francisco Bejarano and J. de Illescas and the Creole J. Rodriguez.

During the 17th and 18th centuries, the Baroque Style also dominated the field of plastic arts.

The establishment of the Fine Arts School of Lima (1919) had a decisive influence on Peruvian sculpture and painting. 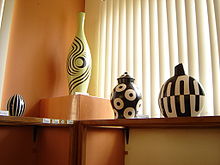 Chulucanas pottery is originates in the Piura Region. Inspired by pre-Incan ceramics, the bold, graphic pottery is now exported all over the world.[2] Designs are varied, but are predominated by black and white. There are several bigger companies but a lot of small manufactures are in Chulucanas itself and in the nearby villages of Quatro Esquinas.