CraftWorks Restaurants & Breweries operates 99 restaurants in 23 states under the name Old Chicago. It has franchise partnerships under its Old Chicago brand that account for 33 additional locations not owned or operated by CraftWorks. Old Chicago features a menu centered around its pizza, while also featuring more traditional fare, such as pastas, burgers, calzones and more. Each store also carries between 110 and 130 types of beer (depending on the season), with generally 30 on draft, challenging its patrons to complete its famed World Beer Tour. Patrons can sign up for the World Beer Tour (WBT) at no cost, at which point they receive a card that tracks all of their beers consumed. Upon reaching 110 different beers, the thirsty patron gets a plaque with their name, and at most stores a personal quote, hung in their designated "home" Old Chicago location. As an added bonus, WBT members also earn points based on previous purchases that can be traded in for various things such as credit towards a bill on future visits, merchandise, or exclusive parties at Old Chicago locations. Old Chicago also offers seasonal “Mini-Tours”, that feature between eight and 12 seasonal beers. Some examples are the Oktoberfest, St. Patrick’s Day, Cinco de Mayo, Summer, and Winter Mini-Tours. As a reward for completion, patrons typically receive a themed Mini-Tour T-shirt. 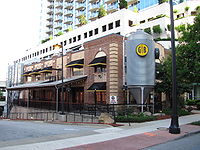 The company operates 35 breweries under the name Rock Bottom Restaurant & Brewery. These breweries are located in several states, with seven restaurants in Colorado, four restaurants each in California, Arizona, and Illinois, two restaurants each in Washington, Ohio, Indiana, Minnesota and Pennsylvania and one restaurant each in Massachusetts, Wisconsin, Iowa, Oregon, Virginia, and Maryland. Each of these breweries has a menu that features a selection of American-style cuisine including pizza and burgers, steaks, salads, and desserts. Each region (and sometimes, each store) has its own selection of beers and beer logos. It is rare to find two beers of the same name and/or taste in two different stores. Rock Bottom Brewery is almost identical to the Walnut Brewery concept. In fact, when the first Rock Bottom was being constructed in downtown Denver, it was to be called Walnut Brewery. The store was being built in the bottom of (what was at the time) the Prudential building. The store was renamed Rock Bottom after someone pointed out that they were 'building at the bottom of the rock,' which was Prudential's slogan at the time.[4]

The company operates two stores under the name Sing Sing. These stores are located in Pittsburgh, Pennsylvania, and Denver, Colorado. ChopHouse & Brewery. These stores feature two pianos on stage with four rotating players for continual music, allowing patrons to listen to classic rock music in a fun environment.

Bluewater Grille is a specialty concept, operating one location in Chattanooga, Tennessee. Its menu features fresh seafood from the Florida coast. It is located next to Big River Grille in downtown Chattanooga.

A1A Aleworks is another specialty concept for CraftWorks. The menu has a self-described "New World Cuisine" flare that features a variety of Caribbean, Cuban, and Floridian influences.

Beginning in 1983 as a small neighborhood meeting place with only 12 tables and a single bar, Ragtime has since grown into one of Jacksonville's hottest spots. Ragtime Tavern offers three different settings for dining, gathering of friends, or drinking freshly brewed beer.

Located in Southside Jacksonville, just a short walk from the Tinsel Town movie theatres, Seven Bridges serves a wide variety of seafood, steaks, chicken, salads and pizza. The restaurant features a working brewery, bar, championship billiards and wide-screen television viewing, as well as semi-private dining areas for groups and parties. For cooler periods, it also has an outdoor heated patio.

Located in Boulder, Colorado. Walnut Brewery was opened in 1990 as Boulder's Original Brewpub. Its menu and decor are almost identical to the Rock Bottom Concept. Walnut Brewery is named for the street on which it is located.

The CraftWorks Foundation is the charitable arm of CraftWorks Restaurants and is a 501(c)(3), non-profit organization. Dedicated to combating hunger in the communities in which they live and operate restaurants, the foundation provides support through the parent company restaurants to organizations and programs addressing this social issue.