The Memorial Bell Tower is located on Main Campus.

Main Campus is the primary campus of North Carolina State University, located in Raleigh, North Carolina, inside the Beltline. Notable features of Main Campus include the Bell Tower and D. H. Hill Library. The campus is known for its distinctive red brick buildings, sidewalks, plazas, and sculptures; some are dotted with decorative brick mosaics. University Plaza is nicknamed "The Brickyard" because it is mostly a flat, open, bricked area.

The Main Campus is divided into three sections: a North Campus, a Central Campus, and a South Campus. The North and Central campuses are separated by the railroad tracks that run through the area. Pedestrian access between these two campuses is by one of five locations: three pedestrian tunnels, an underpass at Dan Allen Drive, or a bridge at Pullen Road. Of the three pedestrian tunnels, the Free Expression Tunnel is the largest; the other two, nicknamed the Reynolds Tunnel and the Thompson Tunnel, are much more narrow and do not have handicap access ramps.

The North Campus consists predominantly of classroom buildings and laboratories. It is the oldest section of the university and is often the busiest of the three campuses during class operational hours. 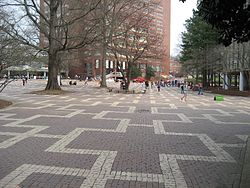 The Brickyard with the D.H. Hill Library tower in the background and Harrelson Hall on the right.
Main article: The Brickyard (NC State)

Officially known as University Plaza, "the Brickyard" is the university's largest plaza, situated at the heart of North Campus. The Brickyard is located just south of Hillsborough Street in front of D.H. Hill library. It is a brick-paved courtyard reminiscent of St. Mark's Square in Venice. The brickyard is a popular gathering place for students who are on their way to and from class, eating a snack from the Atrium food court, or just taking a break. Many organizations, demonstrators, and vendors also gather in the brickyard to pass out information about their organizations, to fundraise, or to sponsor various activities.

D.H. Hill Library and The Atrium

D.H. Hill Library, the university's largest library, and the adjoined Atrium food court are found between Hillsborough Street and the Brickyard. The NCSU Libraries are home to over 3.6 million volumes. NC State's library system is considered to be one of the best research libraries in the nation. 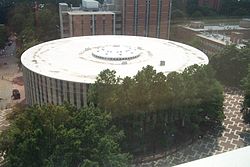 Harrelson Hall is one of the more distinctive buildings at NCSU, located at the foot of the Brickyard. Its structure is in the shape of a cylinder, 261 feet (80 m) in diameter, with a mostly open-air plaza ground floor. It was named after mathematics professor John W. Harrelson. Constructed in 1961, Harrelson Hall was the first cylindrical classroom structure ever built on a university campus. It is four stories high (although top floor is designated as the third floor). A ramp with access to floors 1 through 3 wraps around the building's central column; three stairways and one elevator also provide access to the upper floors. The 105,732-square-foot (9,822.8 m2) building houses offices and classrooms for Mathematical Sciences, Foreign Languages, Sociology, and Anthropology. Lecture halls are found around the inner portion and offices are along the rim.[1] Harrelson and Poe Halls are the only non-brick buildings on NCSU Main Campus.

Harrelson Hall has earned a reputation on campus for having extremely uncomfortable rooms with extremely tight and antiquated seating. Due to the Talley Student Center Renovations, the NC State bookstore has moved inside of Harrelson Hall, as have several student organisations.

The building is slated for demolition by the end of 2014.[2]

Possibly the university's most notable symbol is the Memorial Bell Tower, which is situated on the northeast corner of North Campus at the corner of Hillsborough Street and Pullen Road. The bell tower was completed in 1937 and appears on NCSU's official seal. Its blending of Romanesque features and Gothic verticality are reminiscent of the towers of West Point. The 115-foot (35 m) monument, called "a legend in stone" contains 1,400 tons of stone set on a 700-ton concrete base, and exceeded $150,000 in cost. Although 33 alumni died in World War I, the memorial plaque contains 34 names. Before the armistice ended the war, the name G. L. Jeffers, Class of '13, was wrongly reported killed in action. Many years later, however, when the memorial plaque was made, a list was furnished to the manufacturer from which Jeffers' name had never been removed. When the error was noted on the finished plaque, a decision was made to alter the extra name beyond recognition. It was therefore changed to G. E. Jefferson, a symbol of unknown soldiers from State and elsewhere.

The door of the tower presents the words, "And they shall beat their swords into plowshares." This is a reference to a passage in the Book of Isaiah, in which the world is peaceful and weapons are converted to prosperous and useful tools.

The outside inscription on the cornerstone of the tower is marked with the Masonic symbol and uses both the standard notation and year; Anno Domini (Year of our Lord) 1921 and Anno Lumini (Year of Light) 5921, using the Masonic yearly count, where the history of the world begins in 4000 B.C.

The bell tower is lit up with red lights for a variety of special occasions, including athletic victories. The Bell Tower does not actually have a bell; the carillon system that can be heard ringing from the bell tower is actually housed in nearby Holladay Hall. Originally, a 54 bell carillon system was part of the bell tower's original plan, but an electronic system was chosen due to financial difficulties during the Great Depression. A grassroots movement, Finish the [Bell] Tower, is currently campaigning to have a real carillon system in the tower.[3] The bell tower (Bt) is sometimes used as a unit of measurement, equivalent to the 115 feet (35 m) the tower stands tall.[citation needed]

Holladay Hall was the first building ever to be constructed at North Carolina State University. It is located just southwest of the Bell Tower on Pullen Road. Completed in 1889, it was the first building on campus and contained the entire college for the first few years. Prisoners of the state penitentiary built what was then called “Main Building” with bricks donated by the prison. Though it had no electricity or running water, the basement contained laboratories, a kitchen, a dining hall, and a gymnasium. Offices, classrooms, and a library of books donated by professors were located on the first floor. The second and third floor housed 72 students. In 1915, the building was named in honor of Alexander Holladay, NC State’s first President. The City Council of Raleigh has designated the building as a historic site. Today, it houses the Chancellor's Office.

The Court of North Carolina (informally the Court of Carolinas[4]), located west of the Bell Tower and east of the Brickyard, is a large, mostly green quad on North Campus. It is surrounded by the 1911 Building Hall, Tompkins Hall, Caldwell Hall, Winston Hall, Poe Hall, Page Hall, and Leazar Hall. The west side of the Court is sloped upward along a hill that the 1911 Building is situated upon. It was once home to 100 trees (one for every county in North Carolina; thus the court's name name), but damage caused by Hurricane Fran in 1996 reduced the number significantly, including the destruction of a particularly old and large tree which was some 12 feet (3.7 m) in diameter. Some replanting has occurred, but the Court's former appearance is far from being restored. After World War II, NCSU saw an influx of new post-war students as per the G.I. Bill of 1944. To accommodate the need for classrooms, many temporary classroom buildings (Quonset huts) were constructed on the Court of North Carolina.[5] 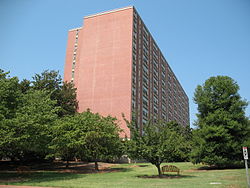 Talley Student Center is a building on NCSU's Central Campus on Cates Avenue for student and campus affairs. Many student organizations like the Student Union are housed in the building. In the basement of Talley is the Wolves' Den, a Wolfpack based sports bar style restaurant and recreation center, featuring billiard tables, ping pong tables, card tables, and board games. A Taco Bell Express, as well as a Lil' Dino Sub Shop, an Emporium Ice Cream Shop, and a C-Store (convenience store) are located on the main floor. Stewart Theatre, a large arena-style theatre most notably used for orientation and comedy sketch programs, occupies the west end of the Talley Student Center. A grand ballroom is located on the second floor. Renovations are currently underway on Talley Student Center with completion in late 2014. [6]

Home to the Campus Cinema, Student Government, Student Media, and the African American Cultural Center, this building was built in 1991.

North Carolina State has its own movie theater located in Witherspoon Student Center. The Campus Cinema usually shows movies just before they become available on DVD. The format is usually 35 mm, and the price for students is $1.50, and $2.50 for General Admission. The cinema also occasionally hosts Sneak Previews of soon-to-be-released hits. There is also a concessions stand where movie-goers are provided with candy, soda, and popcorn at very reasonable prices. The movie schedule is updated twice a semester.

All three of the university's major all-you-can-eat dining halls are located on Central Campus: Fountain, Case, and Clark. Fountain Dining Hall is the largest of the three and predominantly serves western Central Campus. Due to the limited seating capacity, Case dining hall is restricted primarily to residents of nearby residence halls on Central Campus and athletes.[7] 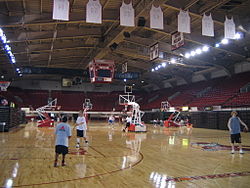 Reynolds Coliseum is a multi-purpose arena on Central Campus that hosts many campus-oriented and sports events, most notably the Wolfpack Women's basketball games. Prior to the completion of the RBC Center—located off-campus—it also hosted the Men's basketball games. One non-conference men's game is played in Reynolds each season, and is known as the "Heritage Game".

The Carmichael Complex or Carmichael Gymnasium is a set of interconnected sports and physical education buildings situated on Cates Avenue on Central Campus. The complex features a weight room, and indoor running track, a gymnasium and the Willis R. Casey Aquatic Center, a swimming pool and aquatics building. The NC State swim team calls the Casey Aquatics Center home, but the pool is often open to recreational swimming.[8]

Doak Field is a baseball stadium located west of the major residence halls on Central Campus. It is home to NC State's Wolfpack baseball team, and has been since its completion in 1966.

When completed, the new Paul Derr Track will be a stadium for NC State track and field events and soccer games. It will consist of an oval (rounded rectangle) running track with a soccer field situated in the center. Dail Stadium will be a new softball stadium, primarily for NC State's softball team. It is being constructed at the corner of Morill Drive and Cates Avenue next to Derr Track. When complete, the track and the softball field will share the same main entrance.[10]