Course of the Rogue River (Oregon)

The Rogue River in the U.S. state of Oregon begins at Boundary Springs on the border between Klamath and Douglas counties near the northern edge of Crater Lake National Park. The Rogue River flows generally west for 215 miles (346 km) from the Cascade Range through the Rogue River – Siskiyou National Forest and the Klamath Mountains to the Pacific Ocean at Gold Beach. Communities along its course include Union Creek, Prospect, Trail, Shady Cove, Gold Hill, and Rogue River, all in Jackson County; Grants Pass, and Galice in Josephine County, and Agness, Wedderburn and Gold Beach in Curry County. Significant tributaries include the South Fork Rogue River, Elk Creek, Bear Creek, the Applegate River, and the Illinois River.[7] Arising at 5,320 feet (1,622 m) above sea level, the river loses more than 1 mile (1.6 km) in elevation by the time it reaches the Pacific.[3][2]

Of the river's total length, 124 miles (200 km), about 58 percent is designated as National Wild and Scenic River, part on the upper Rogue and part on the lower Rogue.[8][9] The Rogue is one of only three rivers that start in or east of the Cascade Mountain Range in Oregon and reach the Pacific Ocean.[10] The others are the Umpqua River and Klamath River. These three Southern Oregon rivers drain the mountains south of the Willamette Valley. The Willamette River drains rivers to the north into the Columbia River,[10] which starts in British Columbia rather than Oregon.

Flowing out of Klamath County and into Douglas County at the headwaters spring, the river runs north for about 0.5 miles (0.8 km) before leaving the national park and entering the national forest. Crossing under National Forest Development Road (NFD) 9281, also known as Old Diamond Lake Road, the river turns west parallel to the Upper Rogue River Trail, which is on the right. Parallel to the river and slightly north of the trail is Oregon Route 230, also known as the West Diamond Lake Highway. Shortly thereafter, the stream goes over a waterfall, receives Cascade Creek from the right and then Mazama Creek from the left at about river mile (RM) 211 or river kilometer (RK) 340. Two more waterfalls occur in the next 2 miles (3.2 km) before the stream turns to the south, passes under NFD 4901 just before receiving Minnehaha Creek from the left near Minnehaha Campground. The stream then meanders through Hamaker Meadows and receives Hamaker Creek from the left before passing Hamaker Campground, which is on the right. At this point, the Upper Rogue River Trail crosses the stream on a footbridge and continues parallel to the river along the left bank. Muir Creek enters from the right at Muir Campground, at RM 204 (RK 328). Soon the Rogue receives Hurryon Creek from the left, Meadow and Lost creeks from the right, and National Creek from the left. Shortly thereafter, NFD 6530 crosses the road and so does the Upper Rogue River Trail, which continues parallel to the river on the right bank. About 1 mile (1.6 km) later, the river leaves Douglas County and enters Jackson County near RM 198 (RK 319).[7][11]

Soon the river receives Wizard and Copeland creeks from the left and passes under Oregon Route 230, which continues roughly parallel to the river along the left bank. Next, Foster and Prairie creeks enter from the left, Bridge, and Brown creeks from the right, and Bybee and Castle creeks from the left. NFD 6510 crosses the river between the latter two creeks, and Route 230 ends shortly thereafter where it meets Oregon Route 62, also known as the Crater Lake Highway. This highway continues roughly parallel to the river on its left bank. Turning southwest at Farewell Bend Campground, on the right at RM 188 (RK 303), the river enters Rogue River Gorge, receiving Union Creek from the left near the unincorporated community of Union Creek and the Union Creek Historic District and Flat Creek from the right shortly thereafter. Below Flat Creek, the Upper Rogue River Trail crosses the river on a footbridge at RM 185 (RK 298), just above Natural Bridge Campground and Natural Bridge. Passing over a waterfall about 1 mile (1.6 km) later, the river passes under Woodruff Bridge, which carries Abbot Creek Road, at the Woodruff Bridge Picnic Area, which lies to the left. The river receives Abbott Creek from the right shortly thereafter and turns south. The stream then flows through Takelma Gorge and passes River Bridge Campground, which is on the left. At this point, NFD 64 crosses the river. Between here and the unincorporated community of Prospect at about RM 172 (RK 277), the river receives Kiter, Latson, Deep, Lund, Graham, and Schoolma'am creeks, all from the right. At Prospect, the river enters a reservoir behind a diversion dam that receives water from a canal on the left and releases water via a canal on the right to hydroelectricity projects. Below the dam, Route 62 and, shortly after, Mill Creek Drive, cross the river and continue parallel to it along the right bank.[7][11] The average stream gradient over the 43 miles (69 km) between the headwaters and Prospect is very high, about 62 feet per mile (12 m/km).[12]

View of Lost Creek Lake, looking east from the top of the William L. Jess Dam

Over the next stretch, the river receives Hog Creek from the left, passes Rattlesnake Rapids at RM 136 (RK 219), receives Little Butte Creek from the left, flows through Denman Wildlife Area and by TouVelle State Recreation Site, which is on its left. As it leaves TouVelle, it passes under Table Rock Road. Over the next few miles, the river flows by several gravel pits on the left and right near the Agate Desert and Kelly Slough. Whetstone and Bear creeks enter from the left as the river approaches the site of the former Gold Ray Dam, which was removed in the summer of 2010,[13] and a USGS gauge at about 126 miles (203 km) from the mouth. The river then passes Fishers Ferry Park, which is on the left, and receives Sams Creek and Water Gulch from the right. 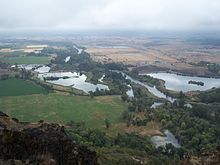 View of the river from Lower Table Rock 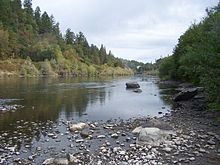 The lower river passes under the Isaac Lee Patterson Bridge and U.S. Route 101 at Gold Beach.

Below Natural Bridge on the upper river

Panorama of the Rogue River near Indian Mary Park