Court of Audit of France

Court of Audit of France 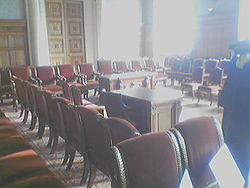 The Court of Audit (in French Cour des comptes) is a quasi-judicial body of the French government charged with conducting financial and legislative audits of most public institutions and some private institutions, including the central Government, national public corporations, social security agencies (since 1950), and public services (since 1976). The Court is essentially a cross between a court of exchequer, comptroller general's office, and auditor general's office in common-law countries.

The Court's three duties are to conduct financial audits of accounts, conduct good governance audits, and provide information and advice to the French Parliament and Administration. The Court verifies the good form of accounting and the proper handling of public money. Established in 1807, the Court is the successor to the Paris Court of Accounts under the monarchy, or Ancien Régime, and had inherent jurisdiction to audit all public accounting officials and agencies. The Court of Audit is independent from the legislative and executive branches of Government. However, the 1946 and 1958 French constitutions made it the Court's duty to assist the Cabinet and Parliament in regulating government spending.

The Chief Baron[1] (premier président) of the Court of Audit is appointed by Order-in-Council of the Cabinet. Once appointed, Barons of the Court, Chief or puisne, have security of tenure. The Court has its own Office of the Prosecutor - with a Chief Prosecutor, Chief Deputy Prosecutor, and two deputy prosecutors - that represents the Government before the Court. The Court is split into seven divisions, each with nearly 30 Barons ordinary and Baron-reporters and headed by a Presiding Baron. Jurisdiction is split between the seven divisions generally by subject matter, e.g., finance, health and social security, and so forth. The Court's Chief Baron is Didier Migaud who took over in 2010 following the death of the late Philippe Séguin. Other judicial officers are generally split into three groups by rank:

All judicial officers are graduates from the National Administration Academy (École nationale d'Administration) or recruited from the Office of the Comptroller-General (inspection générale des Finances).

The French Court of Audit has original jurisdiction to audit and adjudicate accounts made by public, management, and government accountants. The Court also has authority to audit persons acting but not certified as a public accountant. If an account is found to be correct, then the Court issues a quietus to discharge the accountant. If, however, the account is found to be in error, then a debet order is issued against the defaulter. Either order is subject to appeal in the Court or final appeal at the French Supreme Court.

A decision from a lower audit court may be appealed at the main Court of Audit within two months of its being handed down. Afterwards, if the parties are still not satisfied, the Council of State will hear the case on final appeal.

The French Court of Audit puts together its auditing program entirely independently and is vested with very broad powers of review and examination. It publishes and submits an annual audit report to the French President and to Parliament. The report provides a detailed account of the government's poor, or possibly fraudulent, practices and criticizes poor governance and use of public funds. The Court also audits authorizing officers (ordonnateurs) and their expenditures.[3]

In addition to reporting poor practices, the Court judges the accounting of public financial and budgetary officials, collection agencies, or treasury departments, e.g., treasurers, paymasters-general, tax collectors, certified public accountants, and can fine them for late reporting. In such cases, the Court fines public accounting officials for the exact amount of any sum of money that, due to an error on their part, they have unduly paid or failed to recover on behalf of the State. A debet (débet), from Latin "he owes" and not limited in amount, is entered against a defaulting person, and the defaulter becomes the State's debtor. Public and government accountants must therefore have performance liability insurance. Often, however, the Ministry of Finance alleviates a defaulter by granting an abatement of his arrears as the full amount is likely too much to ever pay out of pocket. If an account is audited and found not to be in default, then the Court issues a quietus (arrêt de quitus or arrêt de décharge) acquitting and discharging the official and settling the account.[4]

The Court of Audit of France stands above and heads 27 regional inferior financial courts referred to in French as Chambres régionales des comptes, or regional audit courts. The Court of Audit acts as the administrative head and court of appeal for the financial stream, hearing appeals from regional courts and issuing rule promulgation orders and administrative directives. Regional audit courts were established in 1982 to help unburden the main Court of Audit of its heavy caseload. Since their creation, they have original jurisdiction for most local, county, and regional accounting matters in continental France and its overseas dependancies. This means they audit accounts as well as public institutions to check for fraud, imbezzlement, or misappropriation. In case of budgetary discrepancies, the Court can ask the local prefect to intervene and oversee the handling of public funds until budget problems have been corrected.[5]

Each court is divided into divisions and includes a Baron-in-Charge - who is also either a puisne or deputy baron at the main Court of Audit - and two associate barons. Barons have security of tenure and some also serve as Commissioners-in-Council with prosecutorial duties under the Office of the Prosecutor at the Court of Audit of France. The regional courts focus on:

Accounts found to be in error are entered into debet and accounts in default or fictitious are referred to the local prefect.

Accounts for towns of fewer than 3,500 inhabitants and receipts totalling less than 750,000 euros are automatically referred to the local county or regional treasurer. A regional audit court's ruling may be appealed in the same court or to the Court of Audit of France.[6]