County Road 492 (CR 492) is a primary county road in Marquette County, Michigan. The road serves as an alternate route between Negaunee and Marquette. Several historic sites line the roadway as it runs south and parallel to the main highway, U.S. Highway 41 (US 41) through the Marquette Range in Michigan's Upper Peninsula. The path of the road runs along near tracks of the Lake Superior and Ishpeming Railroad (LS&I). The locally created Iron Ore Heritage Trail will follow CR 492 through Eagle Mills and Morgan Meadows on completion. The western terminus of the county road is on US 41/M-28 in Negaunee and the eastern end is in Marquette next to Lake Superior.

CR 492 was previously known as the Marquette–Negaunee Road before it was made a part of the state highway system. It was originally designated as a part of M-15 as early as 1917. The superintendent of the Marquette County Road Commission, Kenneth Ingalls Sawyer, painted the first rural highway centerline on the roadway on Dead Man's Curve. The highway was later a part of M-28 before being transferred back to county control. The highway assumed its current form by 2001. The eastern section along Brookton Road in Marquette Township was redesignated as a county secondary highway when a new connection to US 41/M-28 was opened, and the designation was extended along Wright Street on the west and north sides of Marquette.

In the city of Negaunee, CR 492 is a part of Maas Street, which runs east–west through town starting at Teal Lake. CR 492 begins at the intersection of Maas Street and the US 41/M-28 highway in Negaunee next to Miners Park. Maas Street passes some businesses near the highway before running through residential neighborhoods. East of Woodland Drive, Maas Street runs downhill into a more rural section of town. In this area, the roadway runs through forested terrain parallel to tracks of the LS&I. The road then loops to the north away from the tracks, crossing the Carp River next to the Forge Road intersection.[3] Through this area, the Iron Ore Heritage Trail, a new multi-use trail system, will follow CR 492.[4] Forge Road runs north to the Michigan Iron Industry Museum on the site of the Carp River Forge, the original iron ore forge in the region.[5] Maas Street runs along the south side of the city cemetery. The cemetery main gate is located near the city limits, where Maas Street ends and County Road 492 continues into Negaunee Township.[2]

CR 492 intersects M-35 near the Eagle Mills location in the township. M-35 approaches the county road from the north before yielding to the country road. M-35 turns east to run concurrently with CR 492. The two cross a rail track before M-35 separates and turns south.[3] Eagle Mills is the location of the main LS&I rail yard and the former Pioneer Pellet Plant. CR 492 curves away from the industrial area to the northeast. The roadway crosses Morgan Creek and enters the Morgan Heights area on the border of Negaunee Township and Marquette Township.[2] This is the site of the first tuberculosis sanitarium in the Upper Peninsula built in 1911. The facility is said to have been haunted before the main buildings were torn down before 2002.[6] The road continues east through forested lands in Marquette Township, rounding Dead Man's Curve and running downhill into the Morgan Meadows area.[3] CR 492 passes a convent of the Sisters of St. Paul de Chartres before entering a residential area.[7] The road curves north past these subdivisions, meeting the western end of CR 500 (Grove Street). Further north, CR 492 intersects Brookton Road before the southern segment terminates at US 41/M-28 in the middle of Marquette Township's commercial corridor.[3]

The county road designation continues north on Wright Street. This segment of CR 492 is separated from the southern section by US 41/M-28. Traffic crossing between the two sides have to use the main highway through median turn arounds in a maneuver similar to a Michigan left. The roadway leaves the commercial corridor and returns to woodland before the intersection with Forestville Road and Commerce Drive. Wright Street curves to the northeast and then the east crossing into the westernmost section of the City of Marquette. As Wright Street continues eastward, it runs through a residential section along part of the city line before completely crossing into Marquette. The roadway passes the Holy Cross Cemetery and the north side of the campus of Northern Michigan University (NMU). The northern main entrance to campus is located at the intersection with CR 550 (Sugar Loaf Avenue) and Tracy Avenue. East of this intersection, Wright Street passes through residential neighborhoods before the intersection with Presque Isle Avenue. East of this intersection, CR 492 crosses onto the northern edge of NMU's campus immediately north of the Superior Dome. Wright Street ends as it curves around to the south into an intersection with Lakeshore Boulevard on the shore of Lake Superior.[3] 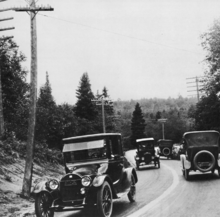 Dead Man's Curve along the Marquette–Negaunee Road shown in 1917 with its hand-painted centerline, the first in the nation

The roadway was originally named the Marquette–Negaunee Road, due to its endpoints. In 1917, the first highway centerline in the nation was painted along a section of the road known as "Dead Man's Curve".[8][9] The centerline was painted by Kenneth Ingalls Sawyer, a long-time superintendent of the county road commission.[10] At this time, the road carried an unsigned designation of "Trunk Line 15" (T.L. 15) as designated by the Michigan State Highway Department (MSHD).[8] This designation was changed to M-15 by the time the state highway system was signed by MSHD in 1919.[11]

With the creation of the United States Highway System on November 11, 1926,[12] M-15 in Michigan was redesignated as a part of the larger US 41.[12] Between Negaunee and Marquette, US 41 was routed north of the Marquette–Negaunee Road, following a section of M-35 out of downtown Negaunee. At the time, M-28 was extended eastward through the Upper Peninsula of Michigan. Between Negaunee and Marquette, M-28 followed the old routing of M-15.[13] By 1936, M-28 was shifted to follow US 41 between Negaunee and Marquette, transferring the old Marquette–Negaunee Road to country control.[1] After this transfer, it carried the CR 492 designation. In 1964, several abandoned underground mine shafts collapsed underneath M-35 in Negaunee, and M-35 was rerouted out of the city along its current roadway through Negaunee Township, connecting with CR 492.[14] The western end of CR 492 was moved by 2001. Before this realignment, CR 492 followed Brookton Road, parallel to US 41/M-28 before turning to the previous terminus just west of the border between Marquette Township and the City of Marquette. After the change, CR 492 turned north to intersect the highway opposite of Wright Street. The CR 492 designation was extended along Wright Street at the same time.[15]

In 2010, the county road commission built an extension to Commerce Drive across US 41/M-28. This extension was designed to connect the southern and northern segments of CR 492 severed by traffic flow changes along US 41/M-28. Previously, traffic wishing to cross between the two segments would need to follow US 41/M-28 to a median turn around in a maneuver similar to a Michigan left. Now traffic can follow Brookton Road to the Commerce Drive extension and around the Westwood Mall to Wright Street on the connector that is designed for 35-mile-per-hour (56 km/h) traffic.[16] The stop light at the US 41/M-28 intersection was installed in early November to complete the project.[17]

The entire highway is in Marquette County.