The County Ground is a cricket ground in Taunton, Somerset. It is the home of Somerset County Cricket Club, who have played there since 1882. The ground, which is located between Priory Bridge Road and St. James Street in Taunton has a capacity in excess of 6,500. The ground was originally built as part of a sports centre by Taunton Athletic Club in 1881, and became the home of the previously nomadic Somerset County Cricket Club soon after. After leasing the ground for ten years, the club bought the ground in 1896, under the guidance of club secretary Henry Murray-Anderdon. The ground ends are the River End to the north and the Old Pavilion End to the south.

In the winter of 1880, Somerset County Cricket Club, prompted by an article in the Somerset County Gazette describing cricket in Taunton as being "in a sorry plight",[2] were considering building their own ground. Athletics was booming in the town, and it was an amalgamation of sporting clubs that leased seven and a half acres of land known as "Rack Field" from local gentleman farmer John Winter for £50 per year. A cricket pitch, cycling-track and running-track were all laid on the ground with great difficulty; with the land lying next to the River Tone. Although Edward Western promised that Somerset could play fixtures on the ground, he acknowledged that the cricket pitch belonged to Taunton Cricket Club. The new sports centre was opened on Whit Monday 1881, with an athletics fixture held on the newly laid running-track to mark the occasion. Although some cricket was played at the ground in 1881, it was not yet ready for first-class matches. Taunton Athletic Society, thanks to money raised by Western, funded the erection of a grandstand and pavilion on the ground ready for a 15-mile bicycle race between French champion Frédéric De Civry and John Keen in August 1881.[3]

Known as the Taunton Athletic Ground, Somerset County Cricket Club played their maiden first-class game there in 1882.[4] Originally a nomadic club, Somerset played their home matches across the county, relying on the good will of other people.[5] Four first-class matches were played at the ground in 1882; after a five-wicket victory over Hampshire County Cricket Club in the first match, Somerset failed to win any of the remaining games, culminating in an innings and 19 run loss against the touring Australians.[6] Somerset lost their briefly held first-class status in 1886, but in the same year took out a nineteen-year lease on the Athletic Ground. The more loyal members of the club had decided that there was a need to restructure the club and have a permanent home. Somerset regained their first-class status after an unbeaten season in 1890, winning the so called 'Second-class County Championship'.[7] The first official County Championship match was played at the ground in 1891, a nine-wicket loss to Lancashire.[4] In 1896, ten years after taking out the lease on the ground, the freehold was purchased by the club for £2,000. Under the administration of club secretary Henry Murray-Anderdon, the small ground was developed, with trees planted along the boundary.[5]

By the start of the twentieth century, the ground was, according to Roebuck, "an intimate and lovely place".[8] A section of the ground known as the "Hen Coop" was used by the important families in Taunton, and although there were no official seat reservations, no one else occupied these seats in the absence of their regular user. For the less well off, hard benches were placed around much of the ground, and the floor was used by many others, particularly under some chestnut trees. A public bar was erected soon after, and was well used, especially after the First World War.[8] In 1925, some of the seats were removed in one corner of the ground, and a hill was built to provide a superior view of the ground, using 400 lorry-loads of earth.[9] During the Second World War, the ground, like many others in the country, was lent to the military. It was used by local soldiers and firemen alike, but the groundsman was careful to maintain the cricket surface throughout the war, in preparation for use again at its conclusion.[10]

In 1989 the Somerset Cricket Museum was opened at the ground within the Old Priory Barn, a Grade II* listed building. The exhibits and displays in the museum primarily cover the cricket club's history including Test match players such as Ian Botham and Marcus Trescothick. It also has a section devoted to the England women's cricket team, due to the County Ground being their headquarters.[11] The museum also hosts a collection of I Zingari memorabilia, a club to whom current chairman Charles Clive Ponsonby-Fane has strong family links.[12] 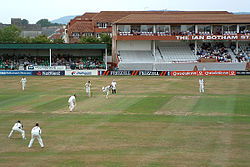 A 2003 image showing the (now demolished) River Stand beside the Ian Botham Stand.

The pitch at the County Ground is surrounded by a number of stands and pavilions. The members' areas, situated at the River End of the ground consists of the Colin Atkinson Pavilion, the Sir Ian Botham Stand and the Marcus Trescothick stand. The non-members' areas, covering the rest of the ground consists of the front of main scoreboard stand, the Family Stand, St James Street Stand, Old Pavilion, Gimblett's Hill and the Somerset Stand.[14]

The largest stand at the County Ground is the Somerset Stand, which was opened at the start of the 2009 season. The stand was built as the first stage of a ground development project, and can accommodate over 3,000 spectators.[15] Behind the Somerset Stand is the Pegasus Court development, containing 65 luxury retirement apartments overlooking the cricket ground.[15] The Old Pavilion is located at the southern end of the ground, and has a small number of seats on its upper tier. On the ground floor, it houses a bar and restaurant. Between the Old Pavilion and the Somerset Stand is Gimblett's Hill, an area that backs onto the churchyard of St. James Church. This section of the ground has a small number of wooden benches at ground-level. To the east of the Old Pavilion is St James Street Stand, a covered section of the ground with a shallow incline.

The eastern side of the ground holds both the Family Stand and the front of main scoreboard stand. Between the two are the Ondaatje Pavilion and the Andy Caddick pavilion, the newest of the pavilions on the ground, and the one currently that currently houses the team's changing room facilities. To the north of the front of main scoreboard stand is the Colin Atkinson Pavilion. A member's area, this has a small number of seats and accommodates the member's bar and restaurant. The second tier, formerly the player's changing rooms, has been converted into a Long Room which seats over 180 spectators.[15] The Sir Ian Botham Stand is at the northern end of the ground, and provides covered member's seating. To the west of this is the Marcus Trescothick Stand, which was opened in June 2008.

Scoreboards are located in the north-east and south-west of the ground, and in addition to the restaurant facilities in the Old Pavilion and the Colin Atkinson Pavilion, food outlets are also located in the Somerset Stand, the Sir Ian Botham Stand and the front of the main scoreboard. The club shop is situated behind the St James Street Stand.

After a long debate by Somerset members on the future location of the cricket club, or redevelopment of the existing ground, the club obtained a grant from the South West Regional Development Agency to fund a feasibility study. The aim of the study was to identify how the development of a new stadium could guarantee the future long-term well-being of Somerset CCC through the construction of modern international standard cricket facilities.

The feasibility study found that both through financial deliberations and the great assistance offered by Taunton Deane Borough Council, that Chairman Giles Clarke announced in April 2006 that the long term future lies at the County Ground. The project costs total approximately £60 million and will deliver a cricket capacity of up to 15,000. It commenced on January 17, 2008[16] In order for the club to remain financially viable, the development is to be conducted in phases in order to allow cricket and other club business to proceed with minimal interruption. Also, in order to fit an international standard pitch on site, it is necessary to increase the boundaries:

On 18 June 2006, the Cricket Ground hosted an open air concert by Elton John to a sell-out 23,000 crowd. Elton John's dedication of one of his songs to Ian Botham revealed the retired English cricketer to be in the audience, watching from his namesake pavilion.