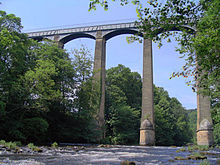 The county borough was formed on 1 April 1996. Borough status was inherited from the town of Wrexham, granted over 150 years ago. Most of the area was previously part of the district of Wrexham Maelor - with several communities coming from Glyndŵr - in the county of Clwyd.

The area includes a portion of the eastern half of the historic county of Denbighshire (although not forming part of the principal area of Denbighshire), and two exclaves of historic Flintshire - Maelor Saesneg and the parish of Marford and Hoseley.

The region is governed as a unitary authority by Wrexham County Borough Council. Most offices of the council are situated within Wrexham town centre, around Llwyn Isaf and the Civic Centre around Chester Street. The headquarters of the organisation is at the Guild Hall, Queens Square.

Wrexham is twinned with the German district of Märkischer Kreis and the Polish town of Racibórz.

The first twinning was established on 17 March 1970 between the former Kreis Iserlohn and Wrexham Rural District. Its early success ensured that, after local government reorganisation in both countries in the mid-seventies, the twinning was taken over by the new councils of Märkischer Kreis and Wrexham Maelor Borough Council and, in 1996, by Wrexham County Borough Council.

In 2001 Märkischer Kreis entered a twinning arrangement with Racibórz, a county in Poland, which was formerly part of Silesia, Germany. In September 2002, a delegation from Racibórz visited Wrexham and began discussions about co-operation which led to the signing of Articles of Twinning between Wrexham and Racibórz in March 2004. The Wrexham area has strong historical links with Poland. Following World War II, many service personnel from the Free Polish armed forces who had been injured received treatment at Penley Polish Hospital. Many of their descendants remain in the area.