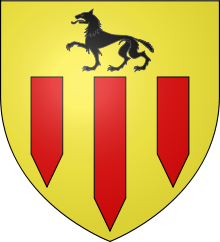 House of Ficquelmont, Coat of Arms[1]

According to the legends, the House of Ficquelmont traces its origin back to the Merovingian times, some authors[3] have listed its members since "Conrad de Ficquelmont, who they say lived in 781"[4]. However, the family -comital since the 14th century[5]- is formally known since the early 12th century with the named Gerard de Ficquelmont, knight, in the year 1130 and the complete proven genealogy begins with the descendance of Erard de Ficquelmont, knight, before 1277[6]. Because it is a Lorrainer family, it owns a dual nobility, both French and German. According to the classes of the French nobility, it is part of both the Noblesse chevaleresque[7] and the Noblesse d'épée (Nobility of the Sword)[8]. According to the classes of the German nobility, it is part of the Uradel [9] and Hochadle (with the form of address Hochgeboren).

The family's estates were originally surrounding the ancient locality of Ficquelmont[10] where they had built a castle, in the current French region of Lorraine. From there the family has risen within the Lorrainer, Holy Roman, French and Austrian nobilities and eventually spread all across Europe following the French Revolution. Therefore, the ten-century-old[2] high nobility Lorrainer family ranks among the most prominent high nobles of the Holy Roman Empire, Lorraine, Austria and Hungary, France, Russia and Belgium [11][12][13][14].

The House of Ficquelmont "belongs to the very ancient Chivalry of Lorraine, [where] it has long been one of the most prominent noble family due to its antiquity and alliances"[15]. Indeed, descendant from the Capetian Royal dynasty [16], it is one of the oldest European continuous noble lineage [2] as it has at been referred as part of the nobility at least at the eve of the Holy Roman Empire.

The family members own numerous titles among which are Counts of Ficquelmont, of Parroy, of Champcourt, of Bathelémont, Counts of the Holy Roman Empire[17], Barons in Lorraine and Knights of Lotharingia. For centuries, members of the House of Ficquelmont had been some of the most prestigious Great Officers of the Ducal Court of Lorraine: chamberlains, masters of ceremonies or commanders of the Dukes. In the 17th and 18th century were:

The Ficquelmonts, true to their knightly origin (European noblemen were originally mounted warriors who swore allegiance to their Sovereign and promised to fight for him), took part of the chivalry Orders of Saint John of Jerusalem of Rhodes and of Malta, of the Golden Fleece[20] and of the Dragon. They also often fought as warlords at the service of France, Spain and the Papacy[21]. The perfect illustration is Count Leonard de Ficquelmont[22], colonel of King Philip V of Spain who died in 1709 during the War of the Spanish Succession in Cataluna.

After Empress Maria Theresa of Austria had married Emperor Francis of Lorraine, the family enter the Austrian nobility, serving under the rule of the Habsburg. But, by the Treaty of Vienna, the duchy of Lorraine became part of the Kingdom of France. As member of the high nobility, the House of Ficquelmont was allowed by Royal decree to choose to serve and live as they pleased either in France or in the Empire. 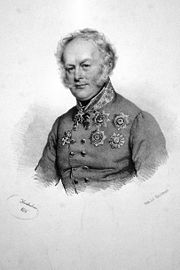 They resolutely choose France: count Charles Henri introduced all of his children to the Sovereign at the Royal Court of Versailles, such presentations were only granted to the members of the noblest families [23] and therefore established the House of Ficquelmont among France's high nobility.

By 1789, the French Revolution has started, bringing sorrow to the family. Indeed Counts of Ficquelmont, as aristocrats, were targeted by the Revolution, several members of the family were beheaded [12] and the family was divided into two main lines.

One stayed in France while the other chose to emigrate to Austria where it has kept close ties (for instance, Reichsgraf Charles de Ficquelmont (1724–1792), had followed Francis I of Lorraine, Holy Roman Emperor at the Imperial Court of Vienna when he was 12 and had stayed there ever since serving as colonel of the Imperial guard and (from 1764) Great-chamberlain of Emperors Francis I and Joseph II[24]) various estates and strong supports all the way to the Habsburgs themselves (for instance, Archduchess Marie-Christine personnally placed count Joseph de Ficquelmont in Emperor Leopold II's care in a letter dated from January 30, 1792[25]). This branch took part of the counter revolutionary's Army of the Princes and Imperial Austrian Army. It is best represented by Count Charles Louis de Ficquelmont, born in the castle of Dieuze on March 23, 1777 and who succeed Prince Klemens von Metternich as acting Minister-President of the Austrian Empire and married countess Dorothea von Tiesenhausen. Since the beginning of the 20th century the Austrian branch has no issue.

The French line is the last remaining. Each generation of the family was distinguished by the France's highest decoration Legion of Honor [26]- almost a unique case in the Legion's history. From that branch are Clotilde de Vaux (1815–1846), which was made Goddess of Wisdom of the Religion of Humanity [27] by philosopher Auguste Comte; Maximilien-Marie de Ficquelmont (1815–1891), famous French mathematician who resolved one of the most difficult problem of equational mathematics by inventing the imaginary number i [28]; Armand-Marie de Ficquelmont (1909–1998), French scientist whose researches helped discovering heavy water and therefore developing nuclear physics[29][30][31].

There are Ficquelmont palaces in Venice, Vienna and St.Petersburg; the original family's castle in the locality of Ficquelmont (Thumeréville, current region of Lorraine, France) was burned down in 1877. However, many others estates were properties of the family over the ages including the Lorrainer châteaux of Parroy, Dieuze (those two serving as primary homes and center of administration of the Ficquelmont family during the late 18th century), Mars la Tour, Bathelémont, Moustier, Champcourt, Puxe and outstanding hotel particuliers in Nancy, Karlsruhe, Strasbourg and Prague. 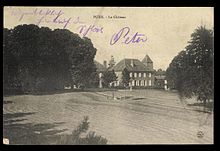 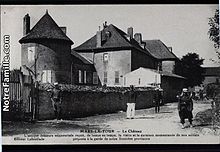 House of Ficquelmont, Coat of Arms[1]

[32] The Ficquelmont family is comital since the 14th century[5] and has been raised to Counts of the Holy Roman Empire[33] with the style of address of Erlaucht (Illustrious Highness) in the 18th century by Francis I of Lorraine, Holy Roman Emperor.

The blazon of this family coat of arms is: gold, three enhanced pickets gules, ensigned with a passant wolf sable.

The family's motto is "Nul ne m'atteint"[37] (modern French translation) (literally: "No one reaches me") meaning both "No family is more noble" and "No one could defeat me" referring to their 10-century-old noble legacy and their warlike origin.