The Los Angeles Open (currently sponsored by Farmers) and formerly known as the Countrywide Classic, Los Angeles Tennis Open, Pacific South West Open, and other sponsored names, is an ATP World Tour 250 series tennis tournament on the ATP Tour held in Los Angeles, California, United States. The tournament is held in July or August (July 26-August 1, 2010), and has hosted the top men (and until 1975, women) in the world since 1927.[1]

This tournament, with prize money of $700,000, is one of the tournaments included in the Olympus US Open Series. The matches are played on the Straus Stadium court with a capacity of 6,500 and the 1,500-capacity Grandstand court. Special events include Kids Day, Fashion Day, Valspar Performance Challenge, and a Legends Invitational Singles competition. This tournament began in 1927 at the Los Angeles Tennis Club (LATC) with Bill Tilden the first winner of the singles. 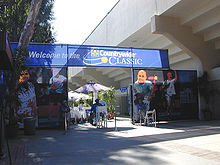 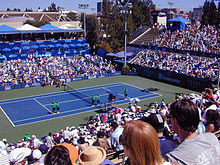 Straus Stadium at the L.A. Tennis Center, on the UCLA campus. 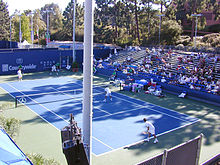