Cell counting is a general name for various methods for the quantification of cells in molecular biology and in medicine.

The need for cell counting

Numerous procedures in biology and medicine require the counting of cells. On most occasions it is actually the concentration of the cells which is required (for example: 5,000 cells per mililiter). By counting the cells in a known volume of culture the concentration can be mediated. Here are several examples for the need for cell counting:

There are several methods for cell counting. Some are primitive and do not require special equipment which is not present at any average biological laboratory, whereas others rely on sophisticated electronic appliances.

A counting chamber, also known as hemocytometer, is a microscope slide that is especially designed to enable cell counting. The slide has a sink in its middle; the area of the sink is marked with a grid. A drop of a cell culture is placed in the sink. Looking at the sample under the microscope, the researcher uses the grid to manually count the number of cells in a certain area. The depth of the sink is predefined, thus the volume of the counted culture can be calculated and with it the concentration of the cells.

Counting chambers are often used in clinical blood counts. Their advantage is being cheap and fast; this is makes them the preferred counting method in fast biological experiments in which it needs to be merely determined whether a cell culture has grown as expected. Usually the culture examined needs to be diluted, otherwise the high density of cells would make counting impossible. The need for dilution is a disadvantage, as every dilution adds inaccuracy to the measurement. 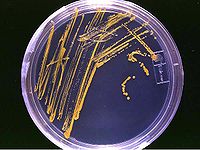 Colonies on an agar plate

To quantify the number of cells in a culture, the cells can be simply plated on a petri dish with growth medium. If the cells are efficiently distributed on the plate, it can be generally assumed that each cell will give rise to a single colony. The colonies can then counted, and based on the known volume of culture that was spread on the plate, the cell concentration can be calculated.

As is with counting chambers, cultures usually need to be heavily diluted prior to plating; otherwise, instead of obtaining single colonies that can be counted, a so-called "lawn" will form: thousands of colonies lying over each other. Additionally, plating is the slowest method of all: most microorganisms need at least 12 hours to form visible colonies.

In spectrophotometry, cultures usually do not need to be diluted, although above a certain cell density the results lose reliability. Of all the electrical appliances used for counting cells, a spectrophotometer is the cheapest and its operation the fastest and most straightforward. This has made spectrophotometry the methods of choice for quick measurements of bacterial growth and related applications. There are spectrophotometers in which several cuvettes can be inserted at one time, reducing work time even more. Additionally, there are spectrophotometers that require extremely small volumes of culture, as little as 1 microliter. This can be an advantage if the culture is precious and cannot be wasted. Spectrophotometry's drawback is its limited accuracy; it is the only method in which the cells are not counted directly—the machine measures light, not cells. This, combined with the stochastic nature of liquid cultures, enables only an estimation of cell numbers.

The electrode of a Coulter counter

A Coulter counter is an appliance that can counts cells as well as measure their volume. It is based on the fact that cells show great electrical resistance; in other words, they conduct almost no electricity. In a Coulter counter the cells, swimming in a solution that conducts electricity, are sucked one by one into a tiny gap. Flanking the gap are two electrodes that conduct electricity. When no cell is in the gap, electricity flows unabated, but when a cell is sucked into the gap the current is resisted. The Coulter counter counts the number of such events and also measures the current (and hence the resistance), which directly correlates to the volume of the cell trapped. A similar system is the CASY cell counting technology.

Coulter and CASY counters are much cheaper than flow cytometers, and for applications that require cell numbers and sizes, such as cell-cycle research, they are the method of choice. Its advantage over the methods above is the large number of cells that can be processed in a short time, namely: thousands of cells per second. This offers great accuracy and statistical significance. 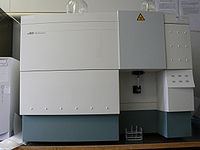 Flow cytometry is by far the most sophisticated and expensive method for cell counting. In a flow cytometer the cells flow in a narrow stream in front of a laser beam. The beam hits them one by one, and a light detector picks up the light that is reflected from the cells.

Flow cetometers have many other abilities, such as analyzing the shape of cells and their internal and external structures, as well as measuring the amount of specific proteins and other biochemicals in the cells. Therefore, flow cytometers are rarely purchased for the sole purpose of counting cells.