Marie Walewska
For the film sometimes known by this name, see Conquest (1937 film).

Maria was born into a wealthy noble family. Her father, who died before she was born, was a landowner and starosta of Gostyń; her mother came from the wealthy Zaborowski family. Maria had six siblings: Benedykt Jozef, Hieronim, Teodor, Honorata, Katarzyna and Urszula-Teresa.[1] She grew up in her ancestral home, Kiernozia, where she also received her education. Interestingly, Nicholas Chopin, Frederic Chopin's father, was one of her tutors. 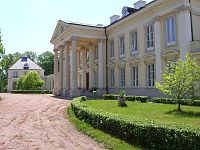 In 1805 she married Athenasius count Colonna-Walewski, starosta of Warka district and a once-chamberlain to the last Polish king, Stanisław August Poniatowski. Walewski was a wealthy landowner, but was four times older than his young bride. Maria and Athenasius had one son, Antoni Rudolf Bazyli Colonna-Walewski, although it is believed by some historians that he was an illegitimate child, conceived shortly before Maria's marriage.[2]

Maria met Napoleon Bonaparte for the first time in 1806 in Błonie, or in Jabłonna.[3] According to Maria's own memoirs, she spoke briefly with the French emperor, but the meeting was inconclusive. However, Napoleon remembered her for her extraordinary beauty and requested to see her in Warsaw, intending to start an affair with her.

They met again at a ball hosted by count Stanislaw Potocki in his Warsaw residence. Although Maria was initially reluctant to become Napoleon's mistress, she was convinced to do so by marshal Géraud Duroc and a number of Polish aristocrats, who hoped that she could influence the emperor to support Poland in its struggle to regain independence from Prussia, the Austro-Hungarian Empire and the Russian Empire. In her memoirs, Maria maintained that she forced herself to get involved with Napoleon for purely patriotic reasons:

“The sacrifice was complete. It was all about harvesting fruit now, achieving this one single equivalence [convincing Napoleon to support Polish independence movement], which could excuse my wystepna position. This was the thought that possessed me. Ruling over my will it did not allow me to fall under the weight of my bad consciousness and sadness.” [4]

The affair was initially kept secret, even though unofficially it was one of the most widely commented news in Warsaw's higher circles. Walewska visited Napoleon, residing in the capital's Royal Castle, only at nights and would secretly leave the building each morning. The relationship progressed when Napoleon moved to his field headquarters in Finckenstein Palace in East Prussia (now Kamieniec Suski, Poland): Maria followed him there and they moved into neighouring apartments. As Maria was extraordinarily pious for her times, they still maintained apparent secrecy: she refused to leave the part of the building in which they lived, fearing being seen by officers surrounding Napoleon, many of whom were her acquaintances or relatives.[5] 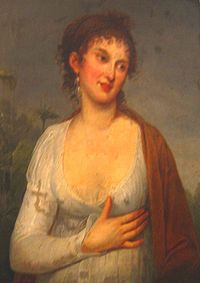 In 1809 Maria followed Napoleon during his journey to Vienna, where she lived in a house near Schönbrunn Palace, Napoleon's residence. During the sejour in Vienna she fell pregnant and returned to Walewice in order to give birth to her second son, Alexandre Joseph. Although Alexandre was unquestionably a product of Maria's affair with Bonaparte, he was legalised by the old count Athenasius and thus bore the name of the counts of Colonna-Walewski.[2]

In 1810 Napoleon returned to Paris, where he was soon joined by Maria. She settled in a palatial residence in the Rue de Montmorency and was given a large rent of 120 000 francs and a permission to enter all of the imperial museums, but her previous relationship with Napoleon ended. Bonaparte planned to divorce Josephine and instead marry Marie Louise, Duchess of Parma and maintaining an affair with another woman seemed inappropriate. Her and her son's future were nevertheless ascertained by the grant of large land estates in the Kingdom of Naples.

In 1812 Maria divorced count Colonna-Walewski. To facilitate it, her brother, Benedykt Jozef, admitted to forcing the marriage upon her. It remains unclear whether this was the truth, as in her memoirs Maria stated that her mother influenced her choice to marry Athenasius, possibly due to an illegitimate pregnancy. As a settlement, she and her oldest son received half of count Walewski's estates, which even though heavily indebted, represented a large wealth.

In 1816 Maria married her longtime admirer and lover, Philippe Antoine d'Ornano, count d'Ornano. They settled in Liege, as d'Ornano did not want to return to Paris due to his pro-Napoleonic allegiances. In 1817 Maria gave birth to count d'Ornano's son, Rudolph Augustus, and she died shortly afterwards due to a prolonged kidney illness. Before her death, she completed her memoirs, which were addressed to her husband. Upon request from her Polish relatives her body was exhumed from the Père Lachaise graveyard in Paris and moved to her family crypt in Kiernozia. 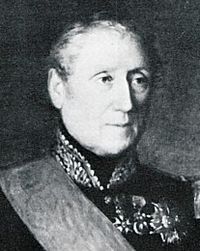 Marie Walewska also had a niece, named Barth, who lived in Bergen, Norway. The Walewska family thus has descendants in Norway living today.

Maria's eventful life immediately attracted attention of a number of Polish and French historians. As her memoirs remained unpublished until the late 19th century, she was a subject of much speculation. The first scholar to write a complete account of her life was a French biographer Frederic Masson, who was allowed by d'Ornano family to use her memoirs.

In the 1930s her adventures were once again described by her descendant, Antoine Philippe Rodolphe, 4th count d'Ornano in a book entitled 'Marie Walewska, "l'ėpouse polonaise de Napolėon"'. It was a belletristic biography that until mid-20th century was considered as a key source on Walewska, as Antoine d'Ornano claimed that it was based on never published documents remaining in the archives of La Branchoire, the family castle.

Count d'Ornano's account presented Maria as a devout patriot and an influential political figure. His book claimed that she was involved in taking major political decisions related to the development of Duchy of Warsaw and engaged herself in disputes with figures such as Józef Poniatowski or Joachim Lelewel. These allegations immediately spurred controversy among Polish historians, who noticed that both, the described events and the dates quoted by d'Ornano seemed unlikely.

Biographer Marian Brandys attempted to deal with some of these doubts in his book “The troubles with Lady Walewska” and he went as far as questioning the very existence of documents from La Branchoire. His main argument was that the facts presented in the book were unrealistic in light of broader historical knowledge about Napoleonic campaigns and the politics of the Duchy of Warsaw. He also noted the numerous discrepancies between the French and English editions of the book.

D'Ornano's book had an equally profound effect on the historian circles in France. In 1950s Jean Savant, a renowned historian and writer, wrote a book about Walewska in which he attempted to recreate a scientific biography of Maria Walewska. Before publishing the book, he printed certain extracts from it in Elle, a popular woman's magazine, which resulted in a famous lawsuit from count d'Ornano and his descendants.

The dispute revolved around copyright issues: Savant allowed the publication of extracts from his work, which included alleged excerpts from Maria's own accounts, taken from d'Ornano's book. However, he failed to appropriately reference them. Antoine d'Ornano sued him for illegally appropriating contents taken from “Marie Walewska, "l'ėpouse polonaise de Napolėon"”, and when Antoine died, his descendants claimed that the aforementioned extracts were not historical source materials, as Savant claimed, but merely an invention of the author. The legal battle continued for a few years, and it was put to an end by Cour de Cassation which decided that Savant acted legally.

Interestingly, d'Ornano family never allowed any historian to come into contact with the alleged Walewska archives. During the lawsuit they maintained that in fact, the documents never existed. However, Savant in his next book “l'Affaire Walewska” attempted to prove the contrary.[6]

Her story is told in a 1937 film Conquest, also known as Marie Walewska.