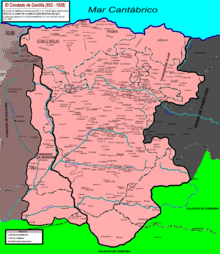 This is a list of counts of Castile. The County of Castile had its origin in a fortified march on the eastern frontier of the Kingdom of Asturias. The earliest counts were not hereditary, being appointed as representatives of the Asturian king. From as early as 867, with the creation of the county of Alava, Castile was subdivided into several smaller counties that were not reunited until 931. In the later 10th century, while nominally in vassalage to the Kingdom of León, the counts grew in autonomy and played a significant role in Iberian politics, but the succession of a minor count in 1017 and his assassination in 1029 caused the county to fall back into the clutches of the Kingdoms of Pamplona and León, until in 1037, count Ferdinand, a Pamplona prince, killed Bermudo III of León and claimed his crown, in the process elevating Castile to royal status.

His acquisition of Castile resulted in reunion of Burgos with Castile, the two titles being used interchangeably thereafter

Following the appointment of Fernán González in 931 to succeed both Gutier Núñez and Álvaro Herrameliz, he reunited the divided counties of Castile, Burgos, Alava, Cerezo and Lantarón into what would become a single semi-autonomous hereditary county of Castile. Al Andalus sources referred to the family as the Beni Mamaduna, the descendants of Muniadona, mother of Fernán.

With the death of Garcia, Sancho III of Navarre, the feudal overlord, appointed his own son by Mayor, sister of Garcia Sánchez, as count.

For Ferdinand and his successors, rulers of th Kingdom and Crown of Castile, see List of Castilian monarchs.