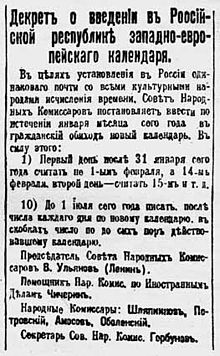 An early Sovnarkom decree, introducing the "Western European calendar" in Russia. According to the decree, January 31, 1918 (Old style) was to be followed by February 14, 1918 (New style)

By September 1917, the councils (soviets) of workers, peasants and soldiers acquired considerable political and military power. The leaders of the Petrograd Soviet conspired to overthrow the Russian Provisional Government; the uprising started on 7 November 1917, when Red Guards units captured the Winter Palace. On the next day, 8 November 1917, the Second All-Russian Congress of Soviets recognized the success of the uprising, and formally established the new government that reflected the capture of the soviets by the Bolsheviks.

The government was formally called the Council of People's Commissars (Совет народных коммиссаров), abbreviated as Sovnarkom (Совнарком). It was Leon Trotsky who devised the council and commissar names, thereby avoiding the more "bourgeois" terms, minister and cabinet.

Traditionally, a government is a council of ministers nominated by a ruler or by a president, but the Bolsheviks saw this as a bourgeois institution, and wanted to create what they thought a new government of workers and peasants, a 'soviet' government.

Each People's Commissar was head of commissariat and had several deputies and a collegium which functioned as a deliberative body to advise the commissar.

The Chairman of the Council of People's Commissars, also elected by the Congress, had a function similar to that of a prime minister. The first Chairman of the Sovnarkom was Vladimir Lenin.

The first council elected by the Second All-Russian congress was composed as follows:

The Council of People's Commissars was renamed Council of Ministers in 1946.