The Cabinet of India (officially called the Union Council of Ministers of India) is the collective decision-making body of the Government of India, composed of the Prime Minister and 35 Cabinet Ministers, the most senior of the government ministers. The Cabinet is the ultimate decision-making body of the executive within the Westminster system of government in traditional constitutional theory.

The Union Cabinet of the Government of India was formed after the Indian general election, 2009 held in five phases in 2009: on 16 April, 22/23 April, 30 April, 7 May and 13 May 2009. The results of the election were announced on 16 May 2009 and led to the formation of the 15th Lok Sabha. Manmohan Singh took oath as the 14th Prime Minister of India on 22 May 2009, followed by the oath-taking ceremonies of the present 'Council of Ministers' in two phases. Most of the cabinet functions from Cabinet Secretariat, at Secretariat Building, New Delhi.

The current Cabinet Secretary is Shri A K Seth [1]

The following are the functions of a Cabinet Secretary[according to whom?]:

In the Government of India Allocation of Business Rules, 1961, "Cabinet Secretariat" finds a place in the First Schedule to the Rules. The subjects allotted to this Secretariat are, firstly, secretarial assistance to Cabinet and Cabinet Committees, and secondly, the administration of the Rules of Business.

The Cabinet Secretariat is responsible for the administration of the Government of India Transaction of Business Rules, 1961 and the Government of India Allocation of Business Rules 1961, facilitating smooth transaction of business in Ministries/Departments of the Government by ensuring adherence to these rules. The Secretariat assists in decision-making in Government by ensuring Inter-Ministerial coordination, ironing out differences amongst Ministries/Departments and evolving consensus through the instrumentality of the standing/adhoc Committees of Secretaries. Through this mechanism new policy initiatives are also promoted.

The Cabinet Secretariat ensures that the President of India, the Vice-President and Ministers are kept informed of the major activities of all Departments by means of a monthly summary of their activities. Management of major crisis situations in the country and coordinating activities of the various Ministries in such a situation is also one of the functions of the Cabinet Secretariat. 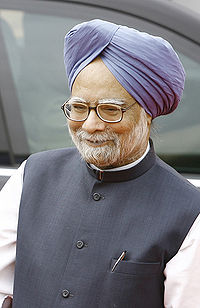 Prime Minister of India, Manmohan Singh heads his second Cabinet, May 2009 to present

This is a list of current members of the Council of Ministers of the Government of India. All ministers are based in offices of their respective Union Ministries in New Delhi. All Cabinet members are mandated by the constitution to be members of either House of the Parliament of India. In a departure from the norm the current Prime Minister, Manmohan Singh, is a member of the Upper House, the Rajya Sabha. He remained so for the duration of his entire first term (2004–2009) too. Most, but not all, previous Prime Ministers have been elected members of the Lok Sabha.

There are three categories of ministers, in descending order of rank:

Of the following 35 ministers, 30 are from the Indian National Congress including the Prime Minister. The Agriculture Minister Sharad Pawar and the Heavy Industries Minister Praful Patel are from the Nationalist Congress Party and Farooq Abdullah, Minister for New And Renewable Energy heads the Jammu & Kashmir National Conference. The Chemicals and Fertilizers Minister M. K. Azhagiri is from the Dravida Munnetra Kazhagam.Railway Minister Dinesh Trivedi is from the Trinamool Congress.

Demographics of the Council of Ministers

Source: Various news organizations[5][6][7][8]
The new United Progressive Alliance (UPA) included 79 members, 78 members in the cabinet plus Prime Minister Manmohan Singh. The first 20 cabinet ministers including Manmohan Singh, swore in on 22 May 2009, while the other 59 cabinet members swore in on 27 May 2009. The non-Congress cabinet ministers, include M.K. Azhagiri (DMK President Karunanidhi's Son) from the DMK, Dinesh Trivedi from Trinamool Congress, Sharad Pawar and Praful Patel from Nationalist Congress Party and Farooq Abdullah from National Conference.