The 1895 Cotton States and International Exposition was held at the current Piedmont Park in Atlanta, Georgia. It is most remembered for the speech given by Booker T. Washington on September 18, 1895.

Lithograph of Piedmont Park plans for the 1895 World's Fair in Atlanta, GA c.1894 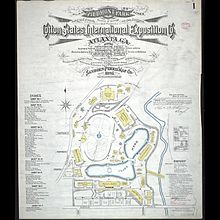 Map of the Expo

The Exposition was open for 100 days, beginning on September 18, 1895 and ending December 31, 1895, attracted visitors from the U.S. and 13 countries.[1] Over $2,000,000 was spent on the transformation of Piedmont Park.[2] The government allocated $250,000 for the construction of a government building and many states and countries such as Argentina also had their own buildings.[3] Also constructed for the fair were the Tropical gardens, now known as the Atlanta Botanical Garden, and Lake Clara Meer which was originally a pond but was expanded to 11.5 acres (47,000 m2) for the event.[4] Today, the stone balustrades scattered around the park are the only part of the enormous main building.[4] The park remains largely as Joseph Forsyth Johnson designed it for the exposition.

The exposition was designed to promote the region to the world and showcase products and new technologies as well as to encourage trade with Latin America. The Cotton States and International Exposition featured exhibits from several states including various innovations in agriculture and technology. President Grover Cleveland presided over the opening of the exposition. The supervising architect for the entire fair was Bradford Gilbert.

December 26, 1895 was Negro Day at the Expo[5]. Famed African American quilter Harriet Powers also attended this day and met with Irvine Garland Penn, the chief of the Negro Building at the Expo.[6]

The great American band master John Phillip Sousa composed his famous march, King Cotton, for the exposition, and dedicated it to the people of the state of Georgia.

Future politician and historian, Walter McElreath, described it in his memoirs:

The railroad yards were jammed every morning with trains that brought enormous crowds. The streets were crowded all day long. Every conceivable kind of fakir bartered his wares. Dime museums flourished on every street.... Vast stucco hotels stood on Fourteenth Street.... I spent a great deal of time on the streets looking at the strange crowds -- American Indians, Circassians, Hindus, Japanese, and people from every corner of the globe -- who had come as professional midway entertainers or fakirs. [7]

Nearly 800,000 visitors attended the event in the fall of 1895. After the exposition, the grounds were purchased by the City of Atlanta and became Piedmont Park.