"Crystalline" is a song by Icelandic artist Björk, released as the lead single from her seventh album Biophilia. The song was released as a single on June 28, 2011[2][3] accompanied by an iPad app developed exclusively for the song. "Cosmogony" served as its double A-side for both its physical and digital release.[4]

In March 2011[5] it was announced that Björk would play at the Manchester International Festival with a new concept of concert. Several songs from the album will be debuted during a series of performances at the festival between June 27 and July 16, 2011. Björk called the performances a "meditation on the relationship between music, nature and technology"."Special" instruments were designed and constructed specifically for these concerts.

The release of the song was preceded by three teasers: on the first one, entitled "Road to Crystalline" we can see Björk driving her Hummer through a road in Iceland while playing an excerpt of the Matthew Herbert Mix of the song; on the second one, we could see one of the new instruments developed for the Manchester performances, that also plays on the track: the 'Gameleste', a celesta which was modified by Icelandic Organ builder, Björgvin Tómasson and British Cymbalsmith and Gong maker, Matt Nolan so that it sounds like Gamelan and could be played remotely by MIDI or even an iPad;[6] and on the third teaser, recording sessions of the remix featuring Omar Souleyman were shown. The song leaked onto the internet on June 25, 2011.[7] On June 28, 2011, UK producers 16bit confirmed via facebook that they produced the song.

"Crystalline" is a mostly electronic song, featuring a continuous 'gameleste' base and electronic beats and rhythm. After the bridge, the song features a gameleste solo, and consequently ends with an uproarious drum and bass section which uses the Amen break. The soundscape seems to be a hybrid of the musical stylings of her previous albums Vespertine and Volta, with undercurrent percussive elements from her album Homogenic.[8]

The lyrics to "Crystalline" talk about the process of crystallization in minerals and rocks but taking a more personal point of view, relating the growth of a crystal structure with the growth of relationships in people's hearts. Björk took inspiration for the song from cities and buildings:

Meanwhile, "Cosmogony" is a more calm and warm song, marking the link between the previous Björk project, Volta and Biophilia, using distorted brass, but in a much more intimate soft way. The lyrics to "Cosmogony" are also far from the rest of the songs on the album, while those are focused on technic or metaphoric facts about a natural phenomenon, the "Cosmogony" lyrics turn into a philosophic view, based on several myths about the creation of the universe. Björk explained: 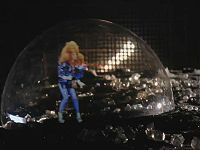 Björk dancing in a sheer ball among many crystals in the Crystalline music video.

The music video for "Crystalline" was recorded on May 26 and was directed by long-time collaborator Michel Gondry.[9] It was premiered on July 26, 2011 on YouTube. The video opens with a view of the moon and a meteor shower on it, forming different forms and crystals. Björk stars as a spectator of the meteor rain in the sky, as some kind of god. The video features heavy computer and stop-motion animation. Gondry explained about the video:

Every song on Biophilia has an app for iPhone or iPad. The main app was released on July 19, 2011, coinciding with the release of "Cosmogony", and it integrates all the songs' apps.

"Cosmogony" is the "mother app". Basically, the app for the song consists in the main menu of the app, a 3D universe designed by M/M (Paris) that can be explored, called "Biophilia Universe", which includes the shortcuts to the rest of the apps.

Still from the Crystalline game.

The app for "Crystalline" consists in a video game in which we use the tilt to displace a crystal rock through a multi-tunnel circuit. We must collect the different crystals to add the instruments to the song, and depending on the tunnel we decide to pass through, we play a different segment of the song.