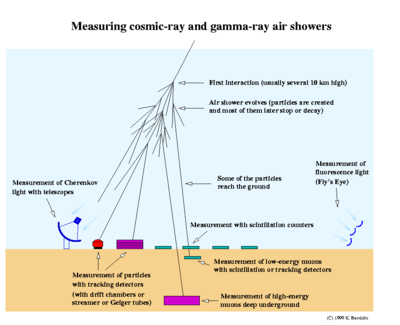 A cosmic-ray observatory is a scientific installation built to detect high-energy-particles coming from space called cosmic rays. This typically includes photons (high-energy light), electrons, protons, and some heavier nuclei, as well as antimatter particles. About 90% of cosmic rays are protons, 9% are alpha particles, and the rest are other particles including but not limited to lithium, beryllium and boron.[1] About .01% of incoming cosmic rays are made of antimatter.[2]

It is not yet possible to build image forming optics for cosmic rays, like a Wolter telescope for lower energy X-rays,[3][4] although some cosmic-ray observatories also look for high energy gamma rays and x-rays. Ultra-high-energy cosmic rays (UHEC) pose further detection problems. One way of learning about cosmic rays is using different detectors to observe aspects of a cosmic ray air shower.

Methods of detection for Gamma-rays.[5]

The Explorer 1 satellite launched in 1958 measured cosmic rays.[6] Anton 314 omnidirectional Geiger-Müller tube, designed by Dr. George Ludwig of Iowa's Cosmic Ray Laboratory, detected cosmic rays. It could detect protons with E > 30 MeV and electrons with E > 3 MeV. Most of the time the instrument was saturated;[7]

Sometimes the instrumentation would report the expected cosmic ray count (approximately thirty counts per second) but sometimes it would show a peculiar zero counts per second. The University of Iowa (under Van Allen) noted that all of the zero counts per second reports were from an altitude of 2,000+ km (1,250+ miles) over South America, while passes at 500 km (310 mi) would show the expected level of cosmic rays. Later, after Explorer 3, it was concluded that the original Geiger counter had been overwhelmed ("saturated") by strong radiation coming from a belt of charged particles trapped in space by the Earth's magnetic field. This belt of charged particles is now known as the Van Allen radiation belt.[8]

Cosmic rays were studied aboard the space station Mir in the late 20th century, such as with the SilEye experiment.[9] This studied the relationship between flashes seen by astronauts in space and cosmic rays, the cosmic ray visual phenomena.[9]

There are a number of cosmic ray research initiatives. These include, but are not limited to: