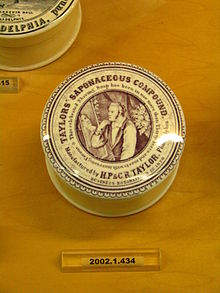 A cosmetic container, cosmetic box, or cosmetic vessel is found in the historical records, both as an artifact, as relief items in some cultures, and are sometimes referenced in historical or archaeological literature. They are sometimes created in specific styles, shapes, or motifs.

The named 'cosmetic vessel' in Ancient Greece is the pyxis. In Ancient Egypt artifacts of hieroglyphically inscribed kohl tubes are found; also kohl vessels, and kohl spoons, which were formed in sylized shapes relevant to Egyptian ideology, including specific hieroglyphs.

The use of the cosmetic vessel may extend to trinket items, car-keys, toiletry accessories, for example a nail clipper; as a non-toiletry storage container, it becomes an 'all-purpose' decorated, special-use vessel.

Containers are known from many societies, ancient and modern. The Native Americans of the Americas made small containers woven from basketry materials, including pine needles.

In Ancient Egypt toiletry items began in the Predynastic Period with ivory cosmetic articles; also bone, stone, or pottery. Ivory combs, and kohl spoons were among the first, with many shapes; common themes for shapes became the ankh symbol, ducks, lotus flowers, etc. In the time of the Predynastic and Old Kingdom, bowls were also mechanically drilled, including miniature sizes, and were used in life and also included as grave goods. The bowls were either a type of unguent jar, or a toiletry "kohl cosmetic vessel". The desert sun or Nile floodwaters during inundation produced a need for facial-eye protection, using 'eyepaint' or eyeliner, when working in the flooded lands; theoretically it was also used by males. The creation of predynastic cosmetic palettes with their eyepaint 'mixing circle', may have been the start of the lineage of the kohl cosmetic artifacts.