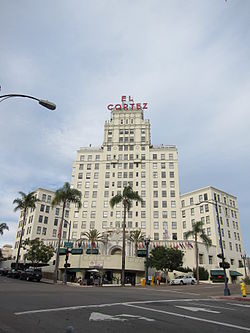 Cortez Hill is located south of Bankers' Hill, north of the Core District, east of Little Italy and west by Balboa Park. This district is bordered by Interstate 5 to the north, Ash Street/A Street to the south, 11th Avenue/SR 163 to the east and Front Street to the west.[1]

Named after the historic El Cortez Hotel, this district is one of San Diego's oldest residential neighborhoods. North of downtown's Core and south of I-5 between Tenth Avenue and Union Street, the 111- acre Cortez Hill is two neighborhoods in one. East of Sixth Avenue rises downtown's highest land mass, the hill dominated by the El Cortez Condominium (formerly El Cortez Hotel). West of Sixth Avenue the flatter area is known as Cortez West. The hill has drawn residents for over a century, and some of the original Victorian style dwellings of the first settlers are still present.

In 1992, the Redevelopment Agency envisioned reviving this district by further developing the hill for residential use, and encouraging a mix of residential and commercial infill. Schools, churches and a pedestrian-friendly environment now characterize the western portion of Cortez Hill. Commercial shops and sidewalk cafes line Fifth and Sixth Avenues, and Ash Street provides a gateway to the waterfront. As the highest land mass in the Centre City Community Planning area, Cortez Hill boasts views of urban San Diego, Balboa Park, the bay and Pacific Ocean. New developments include 6,000 square feet (600 m2) of retail space, 758 residential units and the Cortez Hill Neighborhood Park/Tweet Street. Also in place is a plan to reduce non-resident parking.