Corta Atalaya the 1980s, before closure and inundation.

This open-pit mine in the western part of the Masa San Dionisio[4] was begun in 1907 after major subsidence in some of the higher-altitude parts of the area two year earlier,[3][5] caused by the combustion of pyrites in the earlier subterranean mines.[citation needed] The mines were nationalized in 1954[2] but later sold back to a private company.[when?][citation needed] As of October 2009, the current owner, EMED Tartessus, says they will have the mine operating again before the end of 2010.[6]

Corta Atalaya is a mine in western part of the Iberian Pyrite Belt. It is part of a zone of volcanogenic massive sulfide ore deposits of Silurian to Carboniferous age which has produced significant copper, zinc, lead, gold and silver.[7][8] 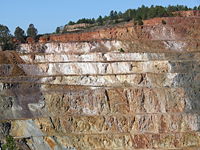 Remnants of the former village of Atalaya on the edge of the cut.

The village of La Atalaya was constructed for the subterranean mining of the San Dionisio seam,[citation needed] which in 1907 became the Corta Atalaya open-pit mine.[3]

In 1873, Rio Tinto Company, later Rio Tinto Group, acquired the mines of Riotinto.[9] Encountering the problem of transporting miners from their homes to their workplaces, and taking only economic concerns into consideration, they planned construction of houses where the miners had already built huts to stay overnight near the mines.[citation needed] Thus, the village of La Atalaya was founded in 1883.[1] The company simply substituted more durable buildings for the huts, constructing neighborhoods in the locations the miners had already chosen. Construction began on 100 houses, each of 45 square metres (480 sq ft), providing only the most minimal necessities of lodging.[citation needed]

The company then went on to build a public plaza, chapel, grocery store, casino, school, and a Guardia Civil barracks. For almost a century, this was home to many of the miners, first those working in the subterranean mine and then in the Corta Atalaya open pit. The population peaked around 1910:[citation needed]

La Atalaya was not the only townsite sacrificed to the mine. Earlier, the original location of Minas de Riotinto lay in the path of the mine; the town was moved to its present site.[2]

As of 2007, EMED Mining owns 51% of the mine. EMED Mining has established EMED Tartessus, which is currently tasked with cleaning and restarting the mine, and Proyecto de Rio Tinto to operate it for the long term.[10]

For some time after the mine closed in 1992, it was possible to visit the mine. EMED Tartessus did not allow the public to visit as of 2007, but was discussing the possibility of changing that.[1]

EMED projects that eventually the mine will again employ 450 people, and that they will be spending over €130 million per year in Spain. As of September 2007, they had spent €3.5 million and budgeted another €15 million toward cleanup and resumption of operations.[10] As of 26 October 2009, they projected that production would resume by the end of 2010.[6]

Two films have used the former mine as a locale: El corazón de la tierra, directed by Antonio Cuadri[1] and based on the novel of the same name by Juan Cobos Wilkins, a political-historical film about the Rio Tinto mines;[11] and the science fiction film PROXIMA, written and directed by Carlos Atanes, which used the mine as an otherworldly landscape.[12]

The nearby golf course Club de Golf Atalaya has grass only on its putting greens. Originally the North Lode Golf Club, founded in 1890, it was Spain's oldest, but was abandoned to the growth of the Corta Atalaya pit. It reopened in 1992 under its current name and configuration.[13]

The following images help to give a sense of the scale of the mine.

This article incorporates information from the revision as of 2010-01-06 of the equivalent article on the Spanish Wikipedia.