The European route E 73 is a Class-A north-south European route that connects the central part of the continent, specifically Hungary and eastern Croatia to Bosnia and Herzegovina and the Adriatic Sea in the area of the port of Ploče. This 702-kilometre (436 mi) route is also designated as the Pan-European Corridor Vc, a branch of the fifth Pan-European corridor. The route largely consists of two-lane roads with at-grade intersections, although in 2000s, approximately one third of the route was upgraded to motorway standards. The remainder of the route is currently being upgraded in all the countries spanned. The longest part of this corridor goes through Bosnia and Herzegovina and is widely touted as a road instrumental to the development of the country. The road also serves as the shortest connection of the eastern and southern parts of Croatia.

The European route E73 is a part of the International E-road network, 702 km (436 mi) long, connecting parts of Hungary and Croatia and Bosnia and Herzegovina to the Adriatic Sea coast near the port of Ploče. The route is a Class A intermediate north-south road, consisting of 275 km (171 mi) of motorways, and a substantial proportion of two-lane roads with at-grade intersections. The E73 starts at the Budapest ring motorway, providing connection to the Hungarian motorway network, as well as the European routes E60, E71 and E75, at an interchange with the M6 motorway taking the E73 route south, past Dunaújváros and Szekszárd towards Bóly, where the motorway (as of August 2011) terminates, and the E73 switches to routes 57 and then 56 past Mohács to Udvar/Duboševica border crossing where the route crosses to Croatia. The Hungarian section of the E73 is 196 kilometres (122 miles) long, and all but the last 20 kilometres (12 miles) has been upgraded to the motorway standards. The final section of the motorway to the Croatian border is planned to extend to a new border crossing at Ivándárda.[1][2]

The E73 route through croatia starts at Duboševica border crossing, following the D7 state road to Beli Manastir and Osijek. In Beli Manastir, there is a junction with the European route E662, also signposted as the D212. The D7 road carries the E73 through Osijek, to the southern city bypass signposted as the D2 state road providing a connection to the A5 motorway to the west of Osijek. The A5 is scheduled for extension north to the Hungarian border, where it would link up with the Hungarian M6 motorway. The A5 extends south to the Sredanci interchange of the A3 motorway, which carries the E73 concurrently with the E70 east to the Velika Kopanica interchange, where the E73 leaves the motorway and rejoins the D7 road once again for a leg to the border of Bosnia and Herzegovina and Slavonski Šamac/Šamac border crossing at the Sava River. Similarly to the northward extension, a southward extension of the A5 is planned spanning the Sredanci interchange and a new border crossing at Svilaj. First segment of the E73 through Croatia, between Hungary and Bosnia and Herzegovina, is 125 kilometres (78 miles) long, including 63 kilometres (39 miles) of motorways.[3][4][2] 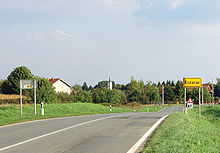 The E73 route in Bosnia and Herzegovina is carried by the M17 road through a number of cities, as it spans the country from its northern border with Croatia to its southern border with Croatia. Some sections of the M17 road are concurrent with other national roads, such as M5 and M18, including a section north of Sarajevo signposted as the M5, and the 36-kilometre (22 mi) A1 motorway between Visoko and Sarajevo. The E73 in Bosnia and Herzegovina consists mostly of two-lane roads with at-grade intersections, running through Doboj, Zenica, Sarajevo, Konjic and Mostar. In Zenica, the E73 forms a junction to the European routes E661 and E761. The latter and the E73 are concurrent between Zenica and Sarajevo, where the E761 diverges towards Višegrad. The European route E762 also forms a junction with the E73 in Sarajevo, heading towards Nikšić, Montenegro. The route crosses back into Croatia south of Čapljina. Total length of the E73 route through Bosnia and Herzegovina is 379 kilometres (235 miles) long.[5][2]

The southernmost segment of the E73 route is located in Croatia, spanning 11 kilometres (6.8 miles) between Metković border crossing and Opuzen, near the city of Metković itself, where the route physically signposted as the D9 state road/E73 connects to the D8 state road (European route E65). The D8 connects the E73 route to the port of Ploče to the north and Dubrovnik to the south. Furthermore, the section has a junction to the D62 state road providing a link to the A1 motorway and the Croatian motorway network in the south of the country. This section completes the total length of the E73 in Croatia of 136 kilometres (85 miles).[3][4][2]

Various sections of the E73 are tolled, using a range of toll collection systems. Motorways in Hungary are tolled using an electronic toll collection (ETC) system with charges differing for various categories of vehicles and length of period when the e-vignette is valid.[6] Croatian motorways are also generally tolled, using a ticket system. All sections of the A5 motorway are tolled, as well as the A3 section concurrent with the E73. As of August 2011, the toll charged along the Croatian section of the E73 route between various toll plazas at each motorway exit, varies depending on the length of route travelled and the vehicle classification in Croatia. The toll is payable in either Croatian kuna or euros and by major credit and debit cards. A prepaid ETC system is also used.[7] State roads in Croatia are not tolled. In Bosnia and Herzegovina, only the A1 motorway is tolled at two mainline toll plazas and further toll plazas at each motorway exit between the mainline toll plazas using a ticket system.[8] 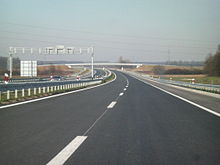 E73 as A5 motorway in Croatia

UNECE was formed in 1947, and their first major act to improve transportation was a joint UN declaration no. 1264, the Declaration on the Construction of Main International Traffic Arteries,[9] signed in Geneva on September 16, 1950, which defined the first E-road network. This declaration was amended several times before November 15, 1975, when it was replaced by the European Agreement on Main International Traffic Arteries or "AGR", which set up a route numbering system and improved standards for roads in the list. The AGR went through several changes, with the last one, as of 2011, in 2008. Reorganization of the E-roads network of 1975 and 1983 redefined the E73 designation previously associated with Cologne–Hamme road and assigned it to Budapest–Osijek–Sarajevo–Metković route.[9][10][2]

The entire E73 route was given further importance in June 1997 at the Pan-European Transport Conference in Helsinki, when the section was made a part of the Pan-European Corridor Vc, spanning Budapest and Metković via Osijek and Sarajevo.[11] This event spurred modernization of the route in all the countries where it is located, and since 1997s, one third of the route, previously developed as a two-lane road only, was upgraded to the motorway standards, with plans to upgrade the remainder of the route as well. 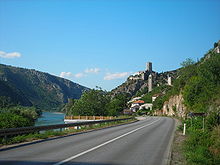 The first Hungarian motorway section along the M6/E73 route was completed between Érd and Dunaújváros in 2006 after the Pan-European Corridor Vc was given development priority following the Helsinki conference. In 2008, the new motorway section was connected to the M0 Budapest ring motorway, and in 2010, the M6 was extended to Bóly. The final section of the motorway to the Croatian border is planned to extend to a new border crossing at Ivándárda, where the M6 shall connect to the Croatian motorway network.[1] In Croatia, the first motorway section completed along the E73 route was the Sredanci–Đakovo section of the A5, completed in 2007, which was extended further to Osijek in 2009.[12] As of August 2011, the A5 is scheduled to be extended north across Drava River to Beli Manastir and the Branjin Vrh border crossing to Hungary where it shall connect to the M6.[13] Also, the A5 is planned to be extended south of the Sredanci interchange to Sava River and a new border crossing to Bosnia and Herzegovina near Svilaj, where the A5 shall connect to the Bosnia and Herzegovina A1 motorway, across a new bridge across Sava River.[14][15] Similarly, the A10 motorway is planned to connect Bosnia and Herzegovina to the Croatian motorway system through the A1 motorway and the port of Ploče.[16][17] The segment of the route through Bosnia and Herzegovina is largely in various stages of planning and development, especially those sections adjacent to the single existing stretch of the A1 motorway near Sarajevo and to planned sections of the Croatian A5 and A10 motorways.[8][18][19]