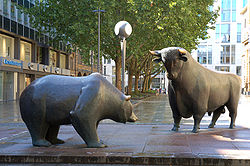 Statues of the two symbolic beasts of finance, the bear and the bull, in front of the Frankfurt Stock Exchange.

A market trend is a putative tendency of a financial market to move in a particular direction over time.[1] These trends are classified as secular for long time frames, primary for medium time frames, and secondary for short time frames.[2] Traders identify market trends using technical analysis, a framework which characterizes market trends as a predictable price tendencies within the market when price reaches support and resistance levels, varying over time.

The terms bull market and bear market describe upward and downward market trends, respectively[3], and can be used to describe either the market as a whole or specific sectors and securities.[2]

In a secular bear market, the prevailing trend is "bearish" or downward-moving. An example of a secular bear market was seen in gold during the period between January 1980 to June 1999, culminating with the Brown Bottom. During this period the nominal gold price fell from a high of $850/oz ($30/g) to a low of $253/oz ($9/g),[4] and became part of the Great Commodities Depression.

Secondary trends are short-term changes in price direction within a primary trend. The duration is a few weeks or a few months.

Another type of secondary trend is called a bear market rally (sometimes called "sucker's rally" or "dead cat bounce") which consist of a market price increase of only 10% or 20% and then the prevailing, bear market trend resumes. Bear market rallies occurred in the Dow Jones index after the 1929 stock market crash leading down to the market bottom in 1932, and throughout the late 1960s and early 1970s. The Japanese Nikkei 225 has been typified by a number of bear market rallies since the late 1980s while experiencing an overall long-term downward trend.

A primary trend has broad support throughout the entire market (most sectors) and lasts for a year or more.

A bull market is associated with increasing investor confidence, and increased investing in anticipation of future price increases (capital gains). A bullish trend in the stock market often begins before the general economy shows clear signs of recovery.

India's Bombay Stock Exchange Index, SENSEX, was in a bull market trend for about five years from April 2003 to January 2008 as it increased from 2,900 points to 21,000 points. A notable bull market was in the 1990s and most of the 1980s when the U.S. and many other stock markets rose; the end of this time period sees the dot-com bubble.

A bear market is a general decline in the stock market over a period of time.[6] It is a transition from high investor optimism to widespread investor fear and pessimism. According to The Vanguard Group, "While there’s no agreed-upon definition of a bear market, one generally accepted measure is a price decline of 20% or more over at least a two-month period."[7] It is sometimes referred to as "The Heifer Market" due to the paradox with the above subject.

A bear market followed the Wall Street Crash of 1929 and erased 89% (from 386 to 40) of the Dow Jones Industrial Average's market capitalization by July 1932, marking the start of the Great Depression. After regaining nearly 50% of its losses, a longer bear market from 1937 to 1942 occurred in which the market was again cut in half. Another long-term bear market occurred from about 1973 to 1982, encompassing the 1970s energy crisis and the high unemployment of the early 1980s. Yet another bear market occurred between March 2000 and October 2002. The most recent examples occurred between October 2007 and March 2009.

A market top (or market high) is usually not a dramatic event. The market has simply reached the highest point that it will, for some time (usually a few years). It is retroactively defined as market participants are not aware of it as it happens. A decline then follows, usually gradually at first and later with more rapidity. William J. O'Neil and company report that since the 1950s a market top is characterized by three to five distribution days in a major market index occurring within a relatively short period of time. Distribution is a decline in price with higher volume than the preceding session.

A market bottom is a trend reversal, the end of a market downturn, and precedes the beginning of an upward moving trend (bull market).

It is very difficult to identify a bottom (referred to by investors as "bottom picking") while it is occurring. The upturn following a decline is often short-lived and prices might resume their decline. This would bring a loss for the investor who purchased stock(s) during a misperceived or "false" market bottom.

Baron Rothschild is said to have advised that the best time to buy is when there is "blood in the streets", i.e., when the markets have fallen drastically and investor sentiment is extremely negative.[8]

Some examples of market bottoms, in terms of the closing values of the Dow Jones Industrial Average (DJIA) include:

By definition, the market balances buyers and sellers, so it's impossible to literally have 'more buyers than sellers' or vice versa, although that is a common expression. The market comprises investors and traders. The investors may own a stock for many years; traders put on a position for several weeks down to seconds.

When a high proportion of investors express a bearish (negative) sentiment, some analysts consider it to be a strong signal that a market bottom may be near. The predictive capability of such a signal (see also market sentiment) is thought to be highest when investor sentiment reaches extreme values.[13] Indicators that measure investor sentiment may include:[citation needed]

Market trends are fluctuated on the demographics and technology. In a macro economical view, the current state of consumer trust in spending will vary the circulation of currency. In a micro economical view, demographics within a market will change the advancement of businesses and companies. With the introduction of the internet, consumers have access to different vendors as well as substitute products and services changing the direction of which a market will go.

Despite that, it is believed that market trends follow one direction over a matter of time, there are many different factors that can change this idea. Technology s-curves as is explained in the book The Innovator's Dilemma. It states that technology will start slow then increase in users once better understood, eventually leveling off once another technology replaces it. This proves that change in the market is actually consistent.

The precise origin of the phrases "bull market" and "bear market" are obscure. The Oxford English Dictionary cites an 1891 use of the term "bull market". In French "bulle spéculative" refers to a speculative market bubble. The Online Etymology Dictionary relates the word "bull" to "inflate, swell", and dates its stock market connotation to 1714.[14]

One hypothetical etymology points to London bearskin "jobbers" (market makers),[16] who would sell bearskins before the bears had actually been caught in contradiction of the proverb ne vendez pas la peau de l'ours avant de l’avoir tué ("don't sell the bearskin before you've killed the bear")—an admonition against over-optimism.[17] By the time of the South Sea Bubble of 1721, the bear was also associated with short selling; jobbers would sell bearskins they did not own in anticipation of falling prices, which would enable them to buy them later for an additional profit.

Another plausible origin is from the word "bulla" which means bill, or contract. When a market is rising, holders of contracts for future delivery of a commodity see the value of their contract increase. However in a falling market, the counterparties—the "bearers" of the commodity to be delivered—win because they have locked in a future delivery price that is higher than the current price.[citation needed]

Some analogies that have been used as mnemonic devices:

In describing financial market behavior, the largest group of market participants is often referred to, metaphorically, as the herd. This is especially relevant to participants in bull markets since bulls are herding animals. A bull market is also sometimes described as a bull run. Dow Theory attempts to describe the character of these market movements.[19]