George IV's train was borne by eight eldest sons of peers and by the Master of the Robes. From left to right: The King, Earl of Surrey, Marquess of Douro, Viscount Cranborne, Earl of Brecknock, Earl of Uxbridge, Earl of Rocksavage, Earl of Rawdon, Viscount Ingestre and Lord Francis Conyngham. 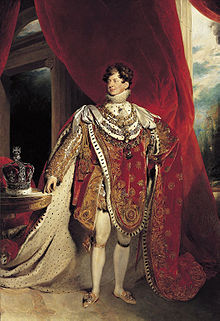 George IV of the United Kingdom in his coronation robes.

The Coronation of George IV of the United Kingdom took place on July 19, 1821, over a year after he had become king. The ceremony took place in Westminster Abbey, and was an elaborate and costly affair. George IV was fully involved in the planning of the ceremony, and was determined that his coronation would be a lavish ceremony. Parliament had voted £100,000 for the costs in 1820. An additional sum of £138,238.0s.2d paid "out of Money received from France on Account of pecuniary Indemnity". This made George IV's coronation the most expensive ever held in the United Kingdom, costing over nine and a half million pounds in today's money.

To achieve the extravagance the new monarch wanted he selected costumes for all of the participants that were inspired by Tudor styles. He spent twenty four thousand pounds on a Coronation robe of crimson velvet with gold stars and an ermine trim costing eight hundred and fifty five pounds with a train that stretched twenty seven feet. His coronation crown was adorned with 12,314 hired diamonds. The new king managed to acquire the blue diamond, which would later be known as the Hope Diamond. This jewel had been looted from the crown jewels of the French monarchy in 1792. George IV purchased the stone in 1820.

Caroline of Brunswick, the estranged wife of the King, was prevented from entering Westminster Abbey on coronation day by prize fighters dressed as pages. They had been hired by her husband who feared she would make a scene at his Coronation. Though George IV had been unable to obtain the divorce he wanted, the trial had ruined the Queen's reputation. Between the King's efforts and a general lack of support from the crowd she was unable to effect an entry into either Westminster Abbey or Hall.

Those in the Coronation Procession met in Westminster Hall. The king was thirty minutes late because a piece of clothing was torn while he dressed. The procession to Westminster Abbey proceeded along a raised awning covered processional route with blue cloth covering the board floor. The Coronation Procession was led by the King's herb woman and her six young attendants who strewed the way with herbs and flowers that was a tradition used as a precaution against the Plague. Next came the officers of state with the crown, the orb, the scepter, and the sword of state. Then followed three bishops carrying respectively a paten, a chalice, and a Bible. King George IV was next in line dressed in the coronation clothes and robes wearing a brown wig topped with a black Spanish hat decorate with ostrich feathers and a heron's plume. His 27-foot (8.2 m) train was held by pages. The King instructed the pages to hold the train well spread out so that people could clearly see the gold embroidery. A cloth of gold Coronation Canopy was carried just behind the King by the barons of the Cinque Ports. The Canopy was held just behind George IV to enable those in windows overlooking the route to see him. Following this group were the peers in their state robes and coronets marching in order of seniority. The dignitaries of the City of London followed. 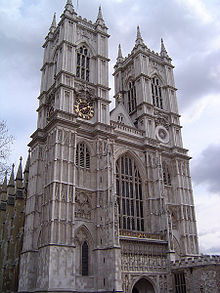 Westminster Abbey, the site of each coronation for the last 900 years.

For the last 900 years, the Coronation ceremony has taken place at Westminster Abbey. During the Coronation ceremony, the Sovereign takes the coronation oath. He swears to rule according to law and to exercise justice with mercy. These promises are symbolized by the three swords of Justice; the sword of the clergy, the sword of the laity, and the sword of mercy. He also swears to maintain the Church of England. Two more swords are used in the coronation. The Great Sword of State and the sovereign's personal sword. The Great Sword of State is 47½ inches long and weighs 8 lbs and symbolizes the sovereign's power and authority. The last sword in the ceremony is the Jeweled State Sword, made for the coronation of George IV, which is known as the 'Sword of Offering'. This sword is used in coronations and knighting ceremonies. The Archbishop of Canterbury delivers this sword to the sovereign. The sovereign then lays the sword at the altar as an offering. It is redeemed for 100 shillings by a peer who carries the Sword of State in the procession. As a Knight of the Garter, the Sovereign wears the golden spurs of Saint George. Knights of the Garter held the Coronation Canopy over the king during the anointing in Westminster Abbey.

The Sovereign is then 'anointed' with holy oil which is applied to the new Sovereign's head, breast and palms in the most solemn part of the ceremony. After being blessed and consecrated by the Archbishop of Canterbury, the Sovereign is seated in King Edward's Chair (made in 1300, and used by every Sovereign since 1626). After the King receives the orb, a reminder that the sovereigns power is contained by God's will, and scepter, the ensign of kingly power. Homage is then paid by the Archbishop of Canterbury and senior powers. A ceremony of Holy Communion then takes place 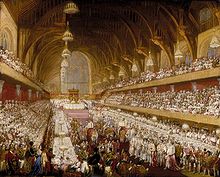 The Coronation Banquet of George IV in Westminster Hall

The coronation banquet was held in Westminster Hall and was the last such banquet ever to be held. The King was escorted to his place by the Barons of the Cinque Ports who traditionally have the right to hold the canopy over the king on the occasion of the Coronation Processions. Once the King was seated the Lord High Constable, the Lord High Steward and the Deputy Earl Marshal rode into the hall on horseback. The peers and bishops at the long tables drank to his Majesty's health followed by rounds of cheering. The King stood up to thank them for their good wishes and to do them" the honour of drinking their health and that of his good people". The Earl of Denbigh wrote, "It exceeded all imagination and conception. Picture to yourself Westminster Hall lined beneath with the peers in their robes and coronets, the Privy Councillors, Knights of the Bath, and a multitude of different attendants and chief officers of State in most magnificent dress, and with a double row of galleries on each side above, filled with all the beauty of London, the ladies vying with each other in the magnificence of their apparel and the splendour of their head-dresses. Some of them being literally a blaze of diamonds."

The Coronation Banquet for three hundred guests at Westminster Hall was served by a procession of household Officials and Gentlemen Pensioners. Some of the dishes served were: soups including turtle, salmon, turbot, and trout, venison and veal, mutton and beef, braised ham and savoury pies, daubed geese and braised capon, lobster and crayfish, cold roast fowl and cold lamb, potatoes, peas and cauliflower. There were mounted pastries, dishes of jellies and creams, over a thousand side dishes, nearly five hundred sauce boats brimming with lobster sauce, butter sauce and mint. The peers and bishops having had nothing to eat since breakfast turned to their plates with relish. The guest's wives and children could only look on from the galleries built for the occasion. One peer at least tied a capon in his handkerchief and tossed it up to his family. Lord Denbigh was given the honour of serving the King and the royal Dukes. One of the things he served was a pineapple weighing eleven pounds which Denbigh cut up with the assistance of Lord Chichester. At about half past seven the King retired from the Hall and returned to Carlton House.