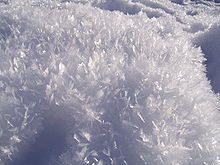 Hoar frost that grows on the snow surface due to water vapor moving up through the snow on cold, clear nights

Types of snow can be designated by the shape of its flakes, description of how it is falling, and by how it collects on the ground. A blizzard and snow storm indicate heavy snowfalls over a large area, snow squalls give heavy snowfalls over narrow bands, while flurries are used for the lightest snowfall. Types which fall in the form of a ball, rather than a flake, are known as graupel, with sleet and snow grains as types of graupel. Once on the ground, snow can be categorized as powdery when fluffy, granular when it begins the cycle of melting and refreezing, and crud or eventually ice once it packs down into a dense drift after multiple melting and refreezing cycles. When powdering, snow drifts with the wind, sometimes to the depth of several metres. After attaching to hillsides, blown snow can evolve into a snow slab, which is an avalanche hazard on steep slopes. 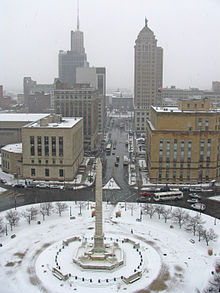 Snowfall's intensity is determined by visibility. When the visibility is over 1 kilometre (0.62 mi), snow is determined to be light. Moderate snow describes snowfall with visibility restrictions between .5 kilometres (0.31 mi) and 1 kilometre (0.62 mi). Heavy snowfall describes conditions when visibility is restricted below .5 kilometres (0.31 mi).[1] The term thundersnow describes a thunderstorm which produces snow as the primary form of precipitation. A blizzard is a long-lasting snow storm with intense snowfall and usually high winds. Particularly severe storms can create whiteout conditions where visibility is severely reduced. A snow storm is a long storm of relatively heavy snow, similar to a blizzard but without the wind requirement. A snowsquall is a brief, very intense snowstorm. A snow flurry describes a period of light snow with usually little accumulation with occasional moderate snowfall. 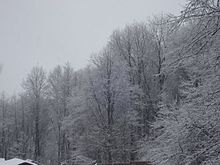 Snow on trees in DuBois, Pennsylvania. 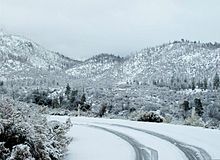 Snow on the ground in Southern California. 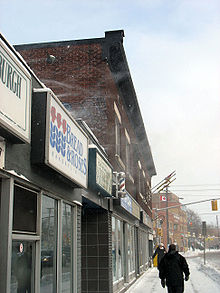 Snow blowing from a roof in Ottawa, Ontario, Canada

Artificial snow
Snow can be also manufactured using snow cannons, which actually create tiny granules more like soft hail (this is sometimes called "grits" by those in the southern U.S. for its likeness to the texture of the food). In recent years, snow cannons have been produced that create more natural-looking snow, but these machines are prohibitively expensive.
Blowing snow
Snow on ground that is being moved around by wind. See ground blizzard.
Chopped powder
Powder snow that has been cut up by previous skiers.
Corn
Coarse, granular wet snow. Most commonly used by skiers describing good spring snow. Corn is the result of diurnal cycle of melting and refreezing.
Cornice
An overhanging formation of windblown snow. Important in skiing and alpine climbing because the overhang can be unstable and hard to see from the leeward side.
Crud
This covers varieties of snow that all but advanced skiers find impassable. Subtypes are (a) windblown powder with irregularly shaped crust patches and ridges, (b) heavy tracked spring snow re-frozen to leave a deeply rutted surface strewn with loose blocks, (c) a deep layer of heavy snow saturated by rain (although this may go by another term). Crud is negotiated with an even weighting along the length of the skis, and smooth radius turns started, if necessary, with a pop or jump. When an advanced skier falls over on crud, it is probably because it is 'heavy crud.'
Crust
A layer of snow on the surface of the snowpack that is stronger than the snow below, which may be powder snow. Depending on their thickness and resulting strength, crusts can be termed "supportable", meaning that they will support the weight of a human, "breakable", meaning that they will not, or "zipper", meaning that a skier can break and ski through the crust. Crusts often result from partial melting of the snow surface by direct sunlight or warm air followed by re-freezing.
Depth hoar
Faceted snow crystals, usually poorly or completely unbonded (unsintered) to adjacent crystals, creating a weak zone in the snowpack. Depth hoar forms from metamorphism of the snowpack in response to a large temperature gradient between the warmer ground beneath the snowpack and the surface. The relatively high porosity (percentage of air space), relatively warm temperature (usually near freezing point), and unbonded weak snow in this layer can allow various organisms to live in it.
Finger drift
A narrow snow drift (30 cm to 1 metre in width) crossing a roadway. Several finger drifts in succession resemble the fingers of a hand.
Heavy crud
See 'Crud'.
Ice
Densely packed material formed from snow that doesn't contain air bubbles. Depending on the snow accumulation rate, the air temperature, and the weight of the snow in the upper layers, it can take snow a few hours or a few decades to form into ice.
Firn
Snow which has been lying for at least a year but which has not yet consolidated into glacier ice. It is granular.
Packed powder
The most common snow cover on ski slopes, consisting of powder snow that has lain on the ground long enough to become compressed, but is still loose. 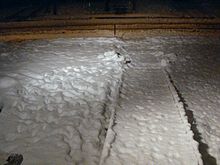 Packing snow
Snow that is at or near the melting point, so that it can easily be packed into snowballs and thrown at other people or objects. This is perfect for snow fights and other winter fun, such as making a snowman, or a snow fort.
Penitentes
Tall blades of snow found at high altitudes.
Pillow drift
A snow drift crossing a roadway and usually 3 to 4.5 metres (10-15 feet) in width and 30 cm to 90 cm (1-3 feet) in depth.
Powder
Freshly fallen, uncompacted snow. The density and moisture content of powder snow can vary widely; snowfall in coastal regions and areas with higher humidity is usually heavier than a similar depth of snowfall in an arid or continental region. Light, dry (low moisture content, typically 4-7% water content) powder snow is prized by skiers and snowboarders. It is often found in the Rocky Mountains of North America and in most regions in Japan. 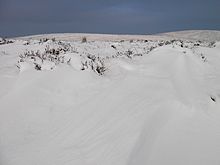 The textures of a snowdrift on the Long Mynd, Shropshire

Slush
Snow which partially melts upon reaching the ground, to the point that it accumulates in puddles of partially-frozen water.
Snirt
Snow covered with dirt, which occurs most often in spring, in Prairie States like North Dakota, where strong winds pick up black topsoil from uncovered farm fields and blow it into nearby towns where the melt rate is slower. The phenomenon is almost magical; one goes to sleep with white snow outside and awakens to black snow. Also, snow that is dirty, often seen by the side of roads and parking lots near areas that have been plowed.
Snowdrift
Large piles of snow which occur near walls and curbs, as the wind tends to push the snow up toward the vertical surfaces.
Surface hoar
Faceted, corn-flake shaped snow crystals that are a type of frost that forms on the surface of the snow pack on cold, clear, calm nights. Subsequent snowfall can bury layers of surface hoar, incorporating them into the snowpack where they can form a weak layer. Sometimes referred to as hoar frost.
Spring snow
Late in the winter season, the mid-morning sun melts the top of the frozen snow base creating a soft layer, 1-2 cm deep, that is ideal for long radius carved turns. This is spring snow. By mid-afternoon, the melted layer is likely to have become too deep for enoyable skiing, i.e. too heavy or too slushy. On some slopes, the melt layer poses an extreme avalanche risk in the afternoon and ski area management will close such runs by late morning. Ideal spring snow conditions are found when the melt layer does not exceed 2cm and the diurnal cycle of melting and refreezing creates a smooth frozen surface, that does not become overly wet in the sun. An exaggerated melting and refreezing cycle results in 'corn' (see above).
Watermelon snow
A reddish/pink-colored snow that smells like watermelons, and is caused by a red-colored green algae called Chlamydomonas nivalis.
Wind slab
A layer of relatively stiff, hard snow formed by deposition of wind blown snow on the leeward side of a ridge or other sheltered area. Wind slabs can form over weaker, softer freshly fallen powder snow, creating an avalanche hazard on steep slopes.
Zastrugi
Snow surface features sculpted by wind into ridges and grooves

The wrong type of snow