Basel-Mulhouse-Freiburg is one of the few airports in the world operated jointly by two countries, France and Switzerland. It is governed by the international convention of 1949. The headquarters of operations are located in Blotzheim, France.[4] The airport is located completely on French soil, and the airport has a Swiss customs area connected to Basel by a border road.[5] The airport is operated on an agreement established in 1946 where the three countries (Switzerland, Germany and France) are granted access to the airport without any customs or other border restrictions. The airport's board has 8 members from each France and Switzerland, and two advisers from Germany[6] 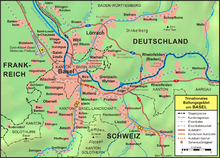 Location of the airport relative to Basel

The airport building is split into two separate sections - Swiss and French. With Switzerland joining the Schengen Treaty in March 2009, the air side was rearranged to include a Schengen and non Schengen zone[7].

An Air India Boeing 707 photographed at the EuroAirport in 1976.

Plans for the construction of a joint Swiss-French airport started in the 1930s, but were stopped by the Second World War.

In 1946, talks were re-opened and it was agreed that an airport would be built at Blotzheim, 4 kilometres (2.5 mi) north of the city. France would provide the land, and the Swiss canton of Basel-Stadt would provide the construction costs. Basel-Stadt's Grand Council agreed to pay the costs for a provisional airport even before the international treaty was signed (which was not until 1949). Construction began on 8 March 1946 and a provisional airport with a 1,200-metre (3,900 ft) runway was officially opened on 8 May in the same year.

Between autumn 1951 and spring 1953, the east-west runway was extended to 1,600 metres (5,200 ft) and the "Zollfreistrasse" (sealed road) was constructed allowing access from Basel to the departure terminal without passing through French border controls.

The first enlargement project was approved by referendum in Basel in 1960 and over the following decades the terminals and runways were continually extended. The north-south runway was extended further to 3,900 metres (12,800 ft) in 1972. In 1984, an annual total of 1 million passengers was reached.

In 1987, the official name was changed to "Euro-Airport Basel-Mulhouse-Freiburg". In 1992, the total of 2 million passengers was reached, and in 1998 3 million. The decision was made to enlarge the terminals again with a new Y-finger dock, the first phase was completed in 2002, the second phase in 2005.

The airline Crossair was based at Basel and was the largest airline. Following the Swissair bankruptcy in 2001, and the transformation of Crossair into Swiss International Air Lines, the number of flights from Basel fell and the new terminal was initially underused. In 2004 the low cost carrier EasyJet opened a base at Basel and the passenger totals rose again, reaching 4 million in 2006. 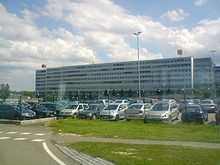 Swiss International Air Lines is headquartered on the grounds of EuroAirport Basel-Mulhouse-Freiburg in the Swiss section of the airport; even though the airport is within France, the Swiss head office is only accessible from Switzerland.[12][13] The Swiss division Swiss Aviation Software has its head office there [14]