Cordillerans are the people of the Cordillera region, in the Philippines island of Luzon. The Igorot form two subgroups: the larger group lives in the south, central and western areas, and is very adept at rice-terrace farming; the smaller group lives in the east and north. The tribal groups formerly practiced headhunting.[citation needed]

Cordillerano, or Cordilleran, is a term used for the people of the hill tribes of Luzon, Philippines, who are residing in the Cordillera and Caraballo mountains. This term became more common after a perceived negative stigma in the term Igorot,[1] which had been incorrectly connected to backwardness and inferiority.[citation needed] In addition, not all Kalinga accept the designation of Igorot.

The Cordillera region of Northern Philippines is the ancestral domain of the Igorots. It comprises the six provinces of Abra, Apayao, Benguet, Kalinga, Ifugao, and Mountain Province, plus the lone city of Baguio.

The Igorots are grouped into six ethno-linguistic groups, the Bontoc, Ibaloi, Isneg (or Apayao), Kalinga, and the Kankana-ey. Below are brief descriptions of these Igorot ethnic groups.[2] 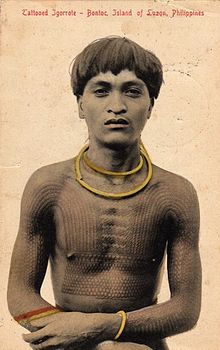 The Bontocs live on the banks of the Chico River. They were once well-known because of their headhunting practices in the olden days but not today. In the previous time, the most distinctive body decoration of the Igorot was the tattoo. The Bontoc describe three types of tattoos: The chak-lag′, the tattooed chest of the head taker; pong′-o, the tattooed arms of men and women; and fa′-tĕk, for all other tattoos of both sexes. Women were tattooed on the arms only. In the past, the Bontoc engaged in none of the usual pastimes or games of chance practiced in other areas of the country, but did perform a circular rhythmic dance acting out certain aspects of the hunt, always accompanied by the gang′-sa or bronze gong. There was no singing or talking during the dance drama, but the women took part, usually outside the circumference. It was a serious but pleasurable event for all concerned, including the children.[3] Present-day Bontocs are a peaceful agricultural people who have, by choice, retained most of their traditional culture despite frequent contacts with other groups.

The pre-Christian Bontoc belief system centers on a hierarchy of spirits, the highest being a supreme deity called Lumawig. Lumawig personifies the forces of nature and is the legendary creator, friend, and teacher of the Bontoc. A hereditary class of priests hold various monthly ceremonies for this deity for their crops, the weather, and for healing. The Bontoc also believe in the "anito"—spirits of the dead who must be consulted before anything important is done. Ancestral anitos are invited to family feasts when a death occurs to ensure the well-being of the deceased's soul.This is by offering some small amount of food to show that they are invited and not forgotten.

The Bontoc social structure used to be centered around village wards ("ato") containing about 14 to 50 homes. Traditionally, young men and women lived in dormitories and ate meals with their families. This gradually changed with the advent of Christianity. In general, however, it can be said that all Bontocs are very aware of their own way of life and are not overly eager to change.

Alternative/associated Names: Ibaloi, Ibaloy, and Nabaloi.
Location: Southern Benguet
Language: Nabaloi or Ibaloy
Population: The 2000 National census shows some 93,000+ persons in Benguet classified themselves as Ibaloy, compared to the Kankanaey who numbered 114,000+. This does not include the Ibaloys in Kayapa and all over the world. An interesting information is provided by Otto Scheerer who wrote in 1908 that there were from 12,000 to 15,000 Ibaloys and that they dominated Benguet. Based on the census figures, the Ibaloy have become a minority in their own province.

The Ibaloi are one of the indigenous peoples of the Philippines who live mostly in the southern part of Benguet, located in the Cordilleras of northern Luzon. The Ibaloi people were traditionally an agrarian society. Many of the Ibaloi people continue with their agriculture and rice cultivation.

Baguio City, the major city of the Cordilleras, dubbed the "Summer Capital of the Philippines," is located in southern Benguet.

The Ibalois' major feast is the Pesshet, a public feast mainly sponsored by people of prestige and wealth. The Pesshet feast can last for weeks and involves the butchering and sacrifice of dozens of animals. One of the more popular dances of the Ibaloi is the Bendiyan Dance, participated in by hundreds of male and female dancers.

The Isneg (or Apayao) inhabit the banks of the Apayao River and its tributaries in Northern Luzon. Like most erstwhile headhunters, they are slash-and-burn farmers who have recently, under the influence of their neighbors, begun to practice wet-rice agriculture.

As a dry rice farmer, the male head of a household annually clears a fresh section of tropical forest where his wife will plant and harvest their rice. Itneg women also cook the meals, gather wild vegetables and weave bamboo mats and baskets, while the men cut timber, build houses and take extended hunting and fishing trips. Often when a wild pig or deer is killed, its meat is skewered on bamboo and distributed to neighbors and relatives. Nearly all Itneg households also harvest a small grove of coffee trees since the main cash crop of the area is coffee.

Inhabiting the drainage areas of the middle Chico River, the Kalingas are noted for their strong sense of tribal awareness and the peace pacts they have made among themselves. They practice both wet and dry rice farming and have developed an institution of peace pacts which has minimized traditional warfare and headhunting and serves as a mechanism for the initiation, maintenance, renewal and reinforcement of kinship and social ties. The Kalinga are divided into Southern and Northern groups; the latter is considered the most heavily-ornamented people of the northern Philippines.

Kalinga society is very kinship-oriented and relatives are held responsible for avenging any injury done to a member. Disputes are usually settled by the regional leaders, who listen to all sides and then impose fines on the guilty party. These are not formal council meetings, but carry a good deal of authority. A system of peace pacts called Bodong.

Alternative or associated names: Northern Kankana-ey, Sagada/Besao Igorot, Western Bontoc, and Applai/Aplai.
Location: Western Mountain Province, Southeastern Ilocos Sur Province, Northern and some parts of Benguet.
Language: Northern Kankana-ey The Kankana-ey language differs from one certain place to another because people use different intonation, spelling, pronunciation, and the use of words. The fundamental differences, however, is the intonation.

Culture The Kankana-eys also have difference in the way they dress. The women soft-speaking Kankana-ey's dress has a color combination of black, white and red. The design of the upper attire is a criss-crossed style of black, white and red colors. The skirt or "tapis" is a combination of stripes of black, white and red. The women hard-speaking Kankana-ey's dress is composed of mainly red and black with a little white styles, as for the skirt or "tapis" which is mostly called "bakget" and "gateng". The men wore a g-string as it is called but it is mainly known as "wanes" for the Kanakana-ey's of Besao and Sagada. The design of the "wanes" as they[who?] call it may vary according to social status or municipality.

Kankana-ey's major dances include tayaw, pattong, takik, a wedding dance, and balangbang.The tayaw is a community dance that is usually done in weddings it maybe also danced by the Ibalois but has a different style.. Pattong, also a community dance from Mountain Province which every municipality has its own style. Balangbang is the modernized word for the word Pattong. There are also some other dance that the Kankana-ey's dance like the sakkuting, pinanyuan(wedding dance)and bogi-bogi(courtship dance). The Kankana-ey house are built like the other houses of the Igorots, which also reflect their social status.

The Gadannes or Gaddangs were considered a subgroup of the Igorots by the Spanish missionaries.

Spaniards called Igorots as Infieles during the colonial era in the Philippines.[4] 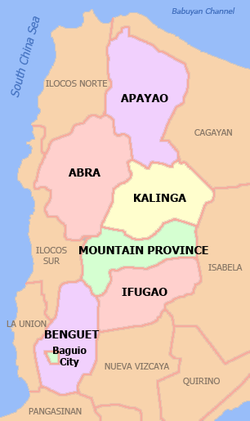 Below is a list of northern Luzon ethnic groups organized by linguistic classification.