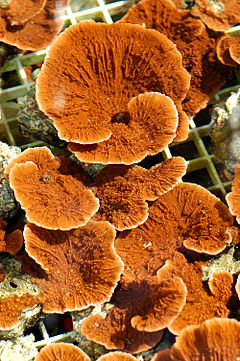 Coral in an aquaculture tank

Coral aquaculture, also known as coral farming or coral gardening, is the cultivation of corals for commercial purposes or coral reef restoration. Aquaculture is showing promise as a potentially effective tool for restoring coral reefs, which have been declining around the world.[1][2][3] The process bypasses the early growth stages of corals when they are most at risk of dying. Coral seeds are grown in nurseries then replanted on the reef.[4] Coral is farmed by coral farmers who live locally to the reefs and farm for reef conservation or for income. It is also farmed by scientists for research, by businesses for the supply of the live and ornamental coral trade and by private aquarium hobbyists.

Coral reef farming is the practice of extracting segments or larva from live corals on the reef in order to replant them in a nursery, where they can be protected while they grow to adulthood. Once the corals have grown they are transplanted back into the reef, usually onto damaged areas. This technique has been proven to improve the recovery of coral reefs,[3] which are currently suffering from degradation.[5]

The method is commonly referred to as the "gardening method" as it is analogous to horticulture and has been compared to silviculture as a management practice that mimics natural ecosystems.[3][6] The technique involves treating coral as if it were a plant. Coral seeds are grown in nurseries, then replanted into their natural habitat – in this case, the sea.[3]

Coral reef farming is predominantly practiced for three reasons, either for conservation, to supply aquariums and zoos for public exhibits or to supply the home aquarium hobby industry. Some areas where coral is farmed in situ for conservation reasons are the Philippines, Solomon Islands, Palau, Fiji, Marshall Islands and Japan. Coral farming ex situ occurs more frequently in public aquariums in North America and Europe.[7] 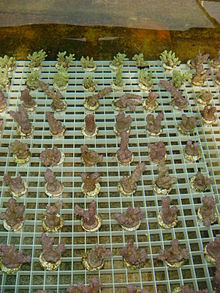 Coral in an aquaculture tank

The decline of reefs, globally has been measured as 1% annually before 1997, increasing to 2% over the period between 1997 and 2003.[3] Adding to this, the reefs of world are further affected by severe weather events, such as cyclones,[8] from predation from crown of thorns starfish and from competition for habitat with other foundation species such as seaweeds. Seaweeds can take over the coral’s usual habitat when fishing stocks are too low and the herbivorous fish do not keep the seaweed at bay by eating it.[5] Adding to this, there is also the increased frequency of coral bleaching events, including "the severe bleaching event" of 1997-1998.[9] It is reported that the increased water temperatures and ocean acidification have correlated with an increase in bleaching events.[10][11]

These natural stressors to the coral reef are further aggravated by the human impact on coral reefs. Anthropogenic stressors such as coastal development, dynamite fishing, cyanide fishing, overexploitation of resources and marine pollution, have left 58% percent of the world's reefs under threat. [12]An example is the exploitation of mushroom coral in Indonesia which is harvested for supply of the jewelry and curios trades.[13][14] The harvesting of live reef organisms, including coral, is increasing around the world, and there is concern about the damage occurring to coral reefs as a result of the marine aquarium trade. [2] Coral is often overharvested from the reef to supply this growing demand. Overharvesting is weakening the ability of reefs to replenish after other harmful events.

Coral aquaculture and transplantation have the ability to improve coral cover, biodiversity, and structural heterogeneity of a degraded reef. Success of the technique has been achieved with fire coral, Pocillopora verrucosa and Acropora hemprichi.[15] The restoration of the reef is a restoration of the natural habitat of organisms associated with the reef, such as reef fishes.[4] Coral is an important foundation species. While it covers less than one percent of the ocean surface, it provides habitat for nearly one third of the all saltwater fish species, as well as ten percent of all fish captured for human consumption.[7] Nursery-grown coral might also promote reef resilience by making contributions to the larval pool. This could have a positive effect on new growth if transplanting of the new coral is made just before a larval release season.[1]

Oceanographer, Baruch Rinkevich[16] coined the term active restoration to describe the method of coral reef farming in contrast with what he described as passive restoration efforts such as the designation of marine protected areas (MPAs).[3] The active restoration of coral reef farming is so called because it involves human intervention to aid conservation. MPAs or bans on coral extraction are described as passive because there is a lack of human interference such as coral harvesting, fishing and dredging. MPAs are often placed around coral reefs in the hope that if the coral is left alone it will recover.[5]

Many people enjoy the creating their own coral display in a home aquarium. In response to this, there are many businesses, such as “ORA”, that farm coral in tanks to supply coral to the aquarium hobbyist market.[17] Corbin reports that the 1999 Honolulu, Hawaii Marine Ornamentals Conference concluded with a recommendation to “give highest priority to projects involving the advancement of marine ornamental aquaculture and reef preservation.” Conferees pressed the importance of encouraging hobbyists to supply only from coral reef farms to help deter the over-harvesting of corals. Conferees were also reported to have recommended initiatives to encourage consumer understanding that cultured ornamentals are a more sustainable and ‘higher value’ alternative to wild-caught live reef organisms.[18]

There are three stages to the farming of coral for coral reef restoration: Collecting asexual or sexual material and growing to in tanks, further growing in submerged sea nurseries and finally re-transplantation into the reef.

Coral can reproduce sexually by spawning or asexually by budding polyps. The current mode of sourcing coral seedlings is to obtain asexual material from reef colonies or stray coral fragments by way of harvesting coral branches, fragments or nubbins (pieces of coral pruned from the tips). This fragmentation is by far the most widely practiced method.[7]

Another method currently being pioneered involves collecting the coral spawn from sexual reproduction and growing up the coral right from the zygote stage. This option has many benefits that are beginning to earn it much attention by researchers. Coral colonies on the same reef usually spawn together in one synchronized spawning event. This allows for hundreds of thousands of coral eggs to be collected at one time. This method is known as spat stocking. Linden describes a growing apparatus made of Petri dishes lined with preconditioned Mailer's paper disks on which the planula of Stylophora pistillata are grown. One-month-old survivors were transferred onto plastic pins in a mid water coral nursery, where the trays were covered with fitted plastic nets to prevent predation and detachment. Four months later, more than 89% of the corals had survived.[19]

At the Great Barrier Reef Aquarium in Townsville, Australia, large mother colonies of Acropora formosa have collection devices placed above them when spawning is about to take place.[20] Small mature colonies are physically removed from the reef and shifted into a laboratory tank for spawning. They can then be reattached to the reef with cement.

Using this method, the mother colonies are not effected in anyway. It may be possible to cultivate large polyped stony corals, such as Caryophylliina, Euphyllia, Heliofungia, Lobophyllia and Trachyphyllia, on a large-scale using sexual reproduction, since they do not reproduce by fragmenting into large numbers.[7] This method has also been proved effective on Red Sea soft coral species, Alcyonarians: Clavularia hamra, Nephthea sp., Litophyton arboreum.[15]

The second stage of the coral farming process is when the corals are transported from their indoor tanks, into floating nurseries in the sea. The nurseries are ideally located at a mid-depth. While they will float in the water column, the coral will attached on the structure at a point that is submerged. Some authors recommend about 6 metres depth with a consideration to ensuring the corals will get just the right amount of sunlight. On the nursery, they are affixed to an artificial base to use as a substrate. This is usually made from string, wire, mesh, monofilament line or epoxy. The colonies will remain here from 8 to 24 months to be reared to a fit size for transplantation back to the reef. [3]

When the corals are big enough to be transplanted into the reef, the transplantation stage involves securing to the corals by plastic pegs or masonry anchors or with epoxy glue.[1]

For commercial or exhibition supply

The process involves two steps: First, the larva are harvested from ‘ex situ’ mature broodstock corals. The coral planula, commonly called seedlings, are grown up in tanks in an indoor facility. Secondly, when they are juveniles they are transported to a submerged nursery in the sea. They remain there until adulthood, and when they have grown to a marketable size (about fist-sized) they can be sold.[2]

Another benefit of coral aquaculture is that it can offer alternative livelihoods to people living near the reefs. This is especially important for communities where income from fishing or harvesting marine organisms have become unsustainable, such as Indonesia.[21] It is possible to use the resources in coral reef farming in a way that is environmentally friendly. Many coral reefs are in locations of low socio-economic status. Coral reef aquaculture has been championed as being a cheap venture to embark on requiring only basic, cheap materials.[22] 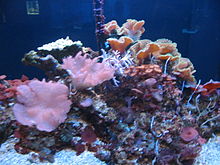 One of the first serious attempts at propagating coral ex situ occurred at the Noumea Aquarium in 1956. At the time it was common for aquarium hobbyists in Germany to create home "mini-reefs". Commercial coral propagation began in America in the 1960’s but the demand in the hobby industry did not really take off until the early 1980s. The trend was attributed to popular articles which appeared in hobby magazines.[7]

Coral aquaculture provides insights into the life histories of a variety of corals.[15] Peterson has shown that early sexual recruits will grow larger when fed the nauplii of brine shrimp. This discovery could shorten the fragile post settlement time in the hatchery.[23]

The Mote Marine Laboratory keeps many broodstock colonies at its Tropical Research Laboratory. The laboratory website reports that its colonies are grown from fragments rescued from boat groundings and environmental disturbances. The corals in the broodstock reserve provide fragments for restoration research. Studies are done to determine optimal size, shape and season for restoration.[24]