Copy of Diana of Versailles

Copy of Diana of Versailles

Copy of Diana of Versailles is a figurative cast stone outdoor sculpture group located on the historic Oldfields estate on the campus of the Indianapolis Museum of Art (IMA), in Indianapolis, Indiana. The sculpture depicts the Greek goddess Artemis (though the figure in this sculpture is referred to by the name of her Roman counterpart, Diana), striding next to a prancing buck while preparing to fire an arrow.[1][2] For the Roman marble upon which this sculpture is based, see Diana of Versailles.

This cast stone sculpture group depicts the Greek goddess Artemis (known here as Diana) on the hunt, accompanied by a disproportionately small buck. Diana, clad in strappy sandals, a flowing, Doric chiton terminating above her knee, a very short himation, a rounded tiara, and a quiver oriented toward her right shoulder, stands mid-stride at a three-quarter angle to the front of the sculpture with her proper right side closer to the front. Her proper left leg is slightly forward and bears her weight as she steps off her right leg, extended a bit behind her on a supportive rise of the base. With her right arm she reaches up and back, elbow extended sideways, and pulls at an arrow from her quiver, and with her left hand she grasps a fragment of a bow at waist height and slightly forward, with her hand positioned precisely between the buck’s antlers. Her head is turned to be nearly in line with her proper right arm and she has an intense gaze, as though she is closely watching her quarry. Her hair is pulled back into a knot at the nape of her neck.

The two-point buck is poised as though leaping, with his hind hooves on the ground behind Diana and his front legs pulled up for the jump. Even rising up in this manner his head barely reaches the height of her waist. The buck is supported from below his belly by a large tree stump. Both figures stand on a blocked rectangular base.

The sculpture is positioned upon a limestone base and completely obscured by a row of bushes and trees.[2][3]

The grounds of Oldfields were landscaped by Percival Gallagher of the Olmsted Brothers in the 1920s. The property and all sculptures on it were donated to the IMA by the family of former Oldfields owner Josiah K. Lilly, Jr., in 1967. In 2001 the outdoor sculptures were assessed, and eighteen selected pieces were accessioned into the IMA’s Lilly House collection. Copy of Diana of Versailles was assigned Accession Number LH2001.242.

This sculpture is a miniature copy of Diana of Versailles, a Roman marble copy (2 meters high) of an ancient Greek bronze sculpture thought to have been made by Leochares c. 325 BC. The Roman marble, of which copies have been made in many media and sizes, was given to King Henry II of France by Pope Paul IV in the 1500s. The statue has been installed at Fontainebleau and Versailles (hence its title) and is now displayed at the Louvre. It has been suggested about the original sculpture that the depicted buck is not Diana’s companion but her quarry.

The maker and place of origin of the IMA’s sculpture are unknown, but it seems to be one example of a sculpture mass-produced for estate grounds decoration. Diana was a favorite theme for this, given her connection to the outdoors.[4]

It is not known when this sculpture was first brought to the Oldfields estate. Two relatively recent reports shed scant light on the issue: O’Donnell et al. speculate that the three Diana sculptures on the property (see also Copy of Diana of Gabii and Diana with Dog) were purchased by the Lilly family, who owned the property after 1932; no supporting evidence is offered.[5] A master's thesis on Oldfields notes that bids for two marble Diana sculptures were under consideration in 1923 during the Gallagher grounds design.[6] It is possible that the resident Landon family later opted to purchase lesser-quality Dianas to save on expense.[3]

The sculpture’s current location is its original, based on photographic evidence. One photograph dated to the period from the 1930s to the 1950s shows the sculpture on the same base but with very different plantings and no nearby path. The location is confirmed by comparison of the oldest extant trees with the ones in the photograph.[2][3] 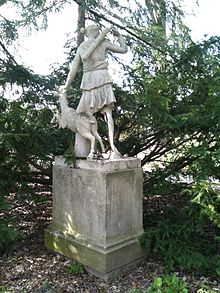 Backside of "Copy of Diana of Versailles"

The cast stone sculpture is monitored and cleaned regularly by the IMA art conservation staff.[7] This sculpture was surveyed in July of 1993 of as part of the Smithsonian American Art Museum's Inventories of American Painting and Sculpture database, and it was considered to require urgent treatment.[1] However, condition problems are due to inherent vice of the materials used. The cast stone is porous and allows moisture to pass through to the rebar, which rusts and expands, progressively cracking the cast stone, which falls away. Options for filling losses with a more pliable material are under consideration.[7]