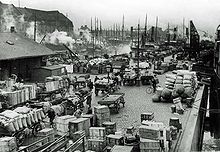 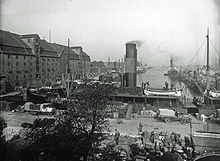 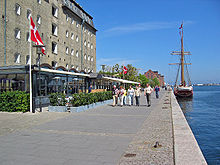 The building as a hotel

In the early 1970s, the warehouse on Copenhagen’s waterfront, known locally as “Korntørringsmagasinet”, was purchased for redevelopment as a hotel and the architects Flemming Hertz (1936-) and Ole Ramsgaard Thomsen (1937–2001) were commissioned to undertake the project.

’’’Copenhagen Admiral Hotel’’’ opened its doors in January 1978, following a comprehensive restoration and conversion of the warehouse. Shortly after opening, the hotel was honoured – the redevelopment being the first Danish recipient of an international award from the European cultural heritage society, Europa Nostra, which was motivated as follows:

Within the warehouse framework, in addition to the 366 rooms, the redevelopment architects were able to create conference facilities with a combined capacity of 396 delegates. This was increased in 1996 when a new conference and function wing was added, facing the waterfront, with a total capacity of 180 delegates.

The most recent renovation of the building and facilities was completed in 2004 at a cost of €10.000.000, the goal of which was to further underline the hotel’s characteristics – the fusion of old and new in a maritime context. This project involved updating the rooms, the lobby, the conference rooms and the promenade function rooms to meet 21st century criteria without detracting from the building’s 18th century historic values.

At the same time, the SALT restaurant which is also in the building, was completely renovated and expanded in cooperation with Conran & Partners, the London based architect and design company.

’’’Copenhagen Admiral Hotel’’’ is centrally located in Copenhagen. The building, which today houses the hotel, is on the harbour front in Copenhagen Harbour and was commissioned in 1781 for the newly chartered trading company, Østersøisk-Guineiske Handelskompagni which was established in 1781 and superseded by Pingel, Meyer, Prætorius & Co. It was completed in 1787 and was taken over by the state as early as 1788. The building was originally used as a granary for drying grain and is now a listed building, class B.

The military engineer and architect, H.E. Peymann,[1] was responsible for the design and construction and, at a time when Denmark’s international trade flourished – not least the slave trade from Danish colonies in Africa to the West Indies – and generated immense wealth, only the best and most durable materials were used. The building’s imposing pine beams, for example, were felled in the forests of Pomerania – today a cross-border area of northern Germany and Poland – and imported.

The warehouse started life at the time when all shipping was under sail and the harbour was a hive of bustling activity. The warehouse, together with the warehouses of competing trading companies, was a focal point for the shipping trade, not only to other parts of Denmark but to the colonies and the rest of the world. The warehouse – originally two buildings - could store up to 30.000 barrels of grain and a grain drying oven was commissioned by King Christian VII and installed on his orders. In 1885, the two buildings were connected, thus creating one large warehouse.

During the Napoleonic Wars, at the beginning of the 19th century, England felt that the Danish merchant fleet represented a threat to its sovereignty over the seven seas and on April 2nd 1801, Lord Nelson moved to destroy this fleet. The “Battle of Copenhagen” of 1801 was contested outside of Copenhagen Harbour, and most of the Danish fleet was destroyed before Denmark–Norway surrendered.

On September 3rd 1807, an enormous English fleet again hove to just outside of Copenhagen and the city prepared itself once again for a siege. The defending forces were confronted by fire power and ammunition, the immensity and effect of which they had no previous experience, as bombs and mortars devastated the city and the streets soon filled with the homeless, fleeing from the resulting fires, and the wounded and the dying. At this time, the warehouse became a temporary hospital, with the area where the old grain drying oven once stood, providing shelter for many of the wounded.

After the Napoleonic Wars and as the glorious days of the trading companies faded, the Danish merchant fleet was reduced to playing a lesser role on the world’s trade routes. The traffic through Copenhagen’s harbour decreased and the warehouse (and its neighbours along the waterfront) ceased to be the hub of activity it once had been and was used for a wide variety of purposes, under changing ownership, during the late 19th and the first half of the 20th century.