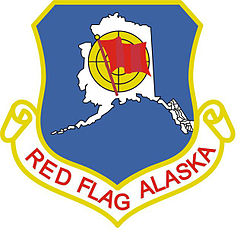 RED FLAG-Alaska is a realistic, 10-day air combat United States Air Force training exercise held up to four times a year. It is held at Eielson Air Force Base and Elmendorf Air Force Base in the State of Alaska. Each RED FLAG-Alaska exercise is a multi-service, multi-platform coordinated, combat operations exercise and corresponds to the designed operational capability of participating units. In other words, exercises often involve several units whose military mission may differ significantly from that of other participating units. RED FLAG-Alaska planners take those factors into consideration when designing exercises so participants get the maximum training possible without being placed at an unfair advantage during simulated combat scenarios.

Cope Thunder was a Pacific Air Forces-sponsored exercise initiated at Clark Air Base, The Philippines, in 1976 which was devised as a way to give aircrews from across Asia their first taste of warfare. The exercise quickly grew into PACAF’s "premier simulated combat airpower employment exercise."

Prior to Operation Desert Storm, less than one-fifth of the U.S. Air Force’s primary fighter pilots had seen actual combat. While the percentage of combat-experienced pilots has increased in recent years, with the end of the Vietnam War a high percentage of had not been thrust into combat. Analysis indicates most combat losses occurred during an aircrew’s first eight to 10 missions. Therefore, the goal of Cope Thunder, and later Red Flag-Alaska, was to provide each aircrew with these first vital missions, increasing their chances of survival in combat environments.

Each Cope Thunder exercise was a multi-service, multi-platform coordinated, combat operations exercise and corresponds to the designed operational capability of participating units. In other words, exercises involved several units whose military mission may differ significantly from that of other participating units. Cope Thunder planners took those factors into consideration when designing exercises so participants received the maximum training possible without being placed at an unfair advantage during simulated combat scenarios.

It was not uncommon during Cope Thunder exercises to see Royal Australian Air Force F-18 Hornets, Republic of Singapore Air Force Hawker Hunters, stacked up on taxi ways awaiting their turn to launch along with USAF F-15 Eagles, and F-16 Fighting Falcons from bases in Pacific Air Forces, and Alaskan Air Command.

RED FLAG-Alaska is a Pacific Air Forces-sponsored exercise. Originally named COPE THUNDER, it was moved to Eielson Air Force Base, Alaska, from Clark Air Base, Philippines, in 1992 after the eruption of Mount Pinatubo on June 15, 1991 forced the curtailment of operations. COPE THUNDER was redesignated RED FLAG-Alaska in 2006.

When the decision was made to relocate COPE THUNDER, Air Force officials viewed Eielson as the most logical choice. That decision was based partly on the fact that Eielson's 353d Combat Training Squadron already controlled and maintained three major military flight training ranges in Alaska. 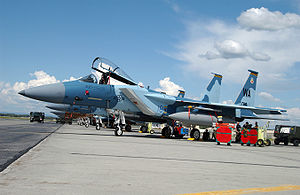 A 65th Aggressor Squadron F-15 at Eielson during Red Flag

Initiated in 1976, COPE THUNDER was devised as a way to give aircrews their first taste of warfare and quickly grew into PACAF's "premier simulated combat airpower employment exercise."

Since its inception, thousands of people from all four branches of the US military, as well as the armed services of Germany, Sweden, Canada, United Kingdom, India, Japan, New Zealand, Australia, Mongolia, and Singapore, have taken part in Cooperative COPE THUNDER exercises. For the first time in 1995, the total force concept was demonstrated as Air National Guard Colonel Gene McVay served as the Cope Thunder Provisional Wing Commander(PWC). Last year, more than 2,000 people deployed to RED FLAG-Alaska, and participating aircrews flew close to 2,000 missions. In the past, aircraft involved include F-15s, F-16s, F/A-18s, EA-6Bs, OA-10s, A-10s, C-130s, KC-130s, KC-135s, KC-10s, E-3Cs, HC-130s, various helicopters and British Tornadoes, Nimrods, VC-10s and Jaguars as well as Stinger Teams from the Japanese Self-Defense Forces.

On an average, more than 700 people and up to 60 aircraft deploy to Eielson, and an additional 500 people and 40 aircraft deploy to Elmendorf Air Force Base, for each RED FLAG-Alaska exercise. Most participating RED FLAG-Alaska units arrive a week prior to the actual exercise. During that time, aircrews may fly one or two range orientation flights, make physical and mental preparations, hone up on local flying restrictions, receive local safety and survival briefings, and work on developing orientation plans.

During the two-week employment phase of the exercise, aircrews are subjected to every conceivable combat threat. Scenarios are shaped to meet each exercise's specific training objectives. All units are involved in the development of exercise training objectives. At the height of the exercise, up to 70 jet fighters can be operating in the same airspace at one time. Typically, RED FLAG-Alaska conducts two combat missions each day.

All RED FLAG-Alaska exercises take place over Alaskan and Western Canadian airspace. The entire airspace is made up of 17 permanent military operations areas and high altitude training areas, plus two restricted areas, for a total airspace of more than 67,000 square miles (170,000 km2), roughly the size of the state of Oklahoma.

Aircrews aren't the only ones who benefit from the RED FLAG-Alaska experience. Exercises provide an operations training environment for participants such as unit-level intelligence experts, maintenance crews, and command and control elements.