Greater Napanee is a town in Lennox and Addington County in the Eastern portion of Southern Ontario, Canada and is approximately 40 kilometres or 24.8 miles west of Kingston. It is located on the eastern end of the Bay of Quinte. The present municipality known as Greater Napanee was created by amalgamating the old Town of Napanee with the townships of Adolphustown, North and South Fredericksburgh, and Richmond in 1999. Greater Napanee is co-extensive with the original Lennox County.

The town is home to the Allan Macpherson House, an historic 1826 property, and current-day museum. Macpherson was major of the Lennox Militia, operated the town's grist and saw mills as well as the distillery and general store. He served as post master and land agent, operated the first local printing press and helped fund the estabalishment of many local schools and churches. The home sits on the banks of the Napanee River, which runs through the town.

The largest employer is a Goodyear Tire and Rubber Company plant.[2] Napanee is also home to the headquarters to Dixie Lee Fried Chicken.

The main streets are Dundas Street (east-west) and Centre Street (north-south). Dundas Street is part of former Provincial Highway Number Two, also known as Kingston Road, and travels through downtown from Toronto in the west and onward to Kingston in the east. Centre Street travels through the centre of the town from the modern commercial area close to Highway 401 to the downtown and onwards to rural townships south of the town.

The area was originally settled by Loyalists in 1784 and was first incorporated in 1854. The first Loyalists settlers arrived at Adolphustown on June 15, 1784. Their landing spot and site of the first Loyalist cemetery in the area has been preserved by the Loyalists.[3] The original hamlet of Napanee was located at the site of a waterfall on the Napanee River, and was first known as Clarksville after Robert Clark, who built a grist mill there. Sir John A. Macdonald, Canada's first prime minister, practised law in Napanee.[4] 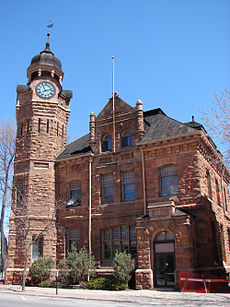 The Napanee Raiders Jr. C hockey club joined the Empire B Junior C Hockey League in 1989. In that time they have claimed eight league championships. In 1993 they went on to capture the All-Ontario, Clarence Schmalz Cup as the Ontario Hockey Association's Junior "C" ice hockey champions by defeating the Hanover Barons of the Western Ontario Junior C Hockey League. The Raiders are the only EBJCHL team to ever capture the All Ontario title. Their home games are played in the newly constructed Strathcona Paper Centre. Prior to the Raiders, Napanee played in the Quinte-St. Lawrence Junior C Hockey League as The Napanee Kelly Tiremen. Their uniform resembled the green, yellow and white uniform of the Minnesota North Stars formerly of the NHL. In 1980, the Kelly Tiremen were rebranded as the Napanee Warriors. The Warriors and the league ceased operation in 1986.

Napanee made one appearance in the Ontario Junior "B" Provincial hockey championship playoffs during the 1934-35 season. The Napanee team was eliminated by Peterborough, from the Sutherland Cup quarter final playoffs in a two games, total goals series.

The Lennox & Addington Lynx floor hockey team took the gold medal at the Special Olympics Canadian National Winter Games in Quebec City in 2008, defeating teams from across the country.

Napanee is also well known for its success in both boys and girls softball. The Napanee North Key Express won the 2010 Canadian Junior fastball championship defeating the host Nova Scotia Eagles 6-1 in the national final. The Napanee (Junior) Express boys claimed a National Junior Fastball title in 1996 while Napanee Midget boys fastpitch teams have won national championships on two occasions. The Napanee Legionnaires captured the Canadian title in 1982 and the Napanee (Midget) Express took top honours in 1997.[30] Also in 2008, the Napanee (Bantam) Express girls fastball team captured the provincial tier II title defeating Oakville 7-4 in the final.[31] The girls also became the first team in Napanee history to qualify for the Eastern Canadian Championships where they finished in second place.[32]

The Napanee Golf and Country Club was established in 1897. The course has nine holes, with different tees for the front and back nine. The course record is 63 set by legendary American golfer Sam Snead.[33]

The Napanee Curling Club was established in 1957 and numerous teams have captured Zone and District titles.[34] Napanee was selected to host the 2010 Ontario Tankard, the annual men's curling championship that sends its winner to the Canadian championship. The event was held February 1–7 at the Strathcona Paper Centre. Glenn Howard, representing Coldwater and District Curling Club, completed a perfect week by defeating Bryan Cochrane of the Rideau Curling Club 5-3 in the final, to capture his fifth straight title.

The downtown area of Napanee has experienced a recent revival ( "A Changing Landscape" ) and is home to a number of boutiques such October's Clothing, Starlet and Serendipity Studio. Nearby are Len's Bakery, John's Restaurant, Louie's Restaurant and The Loaf N Ale. A gourmet coffee shop, Coffee Cravings, sits on the corner of Dundas St E. and John St.

Giant Tiger can be found at the corner of Industrial Boulevard and Centre Street North, in the uptown core. The store features a 200-foot mural by Pierre Hardy. The community also includes a Walmart, a Canadian Tire, and a Home Hardware. A No Frills grocery store is located in the Napanee Mall, and there is a Metro grocery store, (formerly the Great Atlantic & Pacific Tea Company, known as the A&P), down the road from the Napanee Mall.

On the east end of town at the Palace Road exit of Highway 401 is the newly constructed 'Palace Village' that includes numerous small boutique and speciality shops, as well as the Smiling Wilderness restaurant.

A Flying J gas station and truck stop is located off Highway 401 on Highway 41.

A well known favorite of tourists and locals alike is the Chip Truck in Springside Park that has been a "must visit" for over 20 years. In September 2010 the Chip Truck was asked to move from the park while renovations were done and it is currently located in the North Fredricksburg Sports Complex south on county road 8.

Napanee is also the home of "La Pizzeria", made famous by Avril Lavigne's declaration to Rolling Stone Magazine that her "favourite pizza" was served there.[35]

There are two weekly newspapers in Napanee. The Napanee Guide and the Napanee Beaver, both distributed on Thursdays. Napanee is served primarily by radio and television stations from the larger Kingston market. In 2007, a new radio station, CKYM, opened in Napanee on 88.7 FM. Since August 2009, 88.7 MyFM will air all OHL Kingson Frontenacs Hockey for the next 3 seasons.