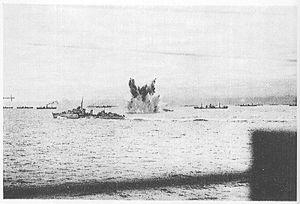 Convoy PQ-18 was one of the Arctic convoys sent from Britain to aid the Soviet Union in the war against Nazi Germany. The convoy departed Loch Ewe, Scotland on 2 September 1942 and arrived in Arkhangelsk on 21 September 1942.

Following the disastrous losses to PQ-17, the British were determined to provide the convoy with air cover. The new escort carrier HMS Avenger had arrived from the United States and formed the core of the escorting force. The convoy was postponed because a large part of the Royal Navy was engaged in Operation Pedestal, protecting a vital convoy to Malta in August.

Close escort was provided by a force led by Cdr.AB Russell, in the destroyer Malcolm. The force comprised two other destroyers Achates and Amazon, two anti-aircraft "gunships", four Flower class corvettes, four A/S trawlers and three minesweepers. The escort was supported by a Carrier group (the escort carrier Avenger and her accompanying destroyers), and a "Fighting Destroyer Escort" of 16 Fleet destroyers commanded by Rear Adm. Robert Burnett in the cruiser Scylla. The escort was augmented by local escort forces from Britain to Iceland (V Adm. Bruce Fraser) and a Cruiser Cover Force of three cruisers and their destroyer escort commanded by V Adm. Bonham-Carter.

Concurrent with PQ 18 the Royal Navy sent two forces to Spitsbergen, a Cruiser force with reinforcements for the garrison there and a Replenishment group for the convoy; these would also be available to support PQ 18. To guard against a sortie by the German surface fleet in Norway a submarine patrol force was sent to keep watch on the main Norwegian ports, nine submarines in all.

Opposing this armada the German Navy had established a U-boat patrol group of 12 U-boats in the Norwegian Sea and a surface force comprising the pocket battleship Scheer, the cruisers Hipper and Köln and four destroyers. Since Operation Rosselsprung in the summer the battleships Tirpitz and Lutzow were in dock for repairs, as were three destroyers, leaving the surface force depleted in numbers and strength.

This convoy was notable for being the first Russian Convoy to use an escort carrier, HMS Avenger carried 10 Hawker Hurricane fighter planes and three Fairey Swordfish torpedo bombers.

A combined Royal Air Force-Royal Australian Air Force detachment, made up of 32 Hampden torpedo bombers from 144 Squadron and 455 Squadron, nine Catalina maritime patrol aircraft from 210 Squadron and three photo reconnaissance Spitfires, was sent to air bases in the Soviet Union, to fend an attack by the German battleship Tirpitz, if it should eventuate. Nine Hampdens were lost on route, including one which crash landed in German-occupied Norway; plans for the operation fell into the hands of the Germans as a result.[1] The RAF-RAAF force regrouped at Vaenga air base, 40 km north of Murmansk. 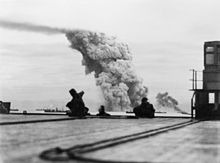 A merchant ship blows up

The Luftwaffe provided a formidable opponent with 42 Heinkel He 111 torpedo bombers of KG 26 and KG 35 Junkers Ju 88 dive bombers. Tactics consisted of simultaneous attack by torpedo bombers and dive bombers swamping the defenders. U-Boats began shadowing the convoy; one of them, the U-88 was sunk by HMS Faulknor, south of Spitsbergen. The convoy was sighted by a German Blohm & Voss BV 138 flying boat on 12 September and later that day, German torpedo bombers sank eight ships. The next day, the Germans returned, losing five Heinkels to Sea Hurricane fighters; three Sea Hurricanes were also shot down by friendly fire, but their pilots were rescued. The tanker SS Atheltemplar was another casualty, being torpedoed on 14 September and abandoned. Later attacks were beaten off at the cost to the Germans of 20 more planes shot down. The official despatch states:

"During the whole period, just over two days, of concentrated air attack, the enemy lost at least forty aircraft: there can be little doubt that these heavy casualties, especially among his limited supply of really skilled torpedo pilots, was largely responsible for the steady decline in the size and vigour of his attacks." [2]

The convoy was attacked by U-boats on its approach to Kola Inlet and three more ships were sunk by Murmansk harbour. In total, 13 merchants were lost from the convoy.

The Tirpitz did not attack the convoy and the RAF-RAAF Hampden force undertook one patrol, on September 14. They left their 23 aircraft in the USSR before returning to bases in the UK.

Ships of the convoy