The Conversion of Chełm Eparchy, which occurred from January to May 1875, refers to the generally forced conversion of the last Uniate Eparchy in the Russian Empire, which was centered in the Volhynian city of Chełm (Kholm), to the Orthodox faith.

In 988 East Slavic state of Kievan Rus' was converted to the Eastern form of Christianity by Vladimir I of Kiev. Following the East-West Schism between the Roman and Byzantine Churches, the form of Christianity that Kievan Rus followed became known as Eastern Orthodox Church. In 1241, Kievan Rus was conquered by the Mongols. Over the centuries, the parts of Rus that would one day become Ukraine and Belarus were absorbed by the Poland. Within the mostly Roman Catholic Polish state, the native Orthodox population and Church of the former lands of Ruthenia were pressured to transfer their allegiance from the Patriarch of Constantinople to the Pope of Rome. Between 1595-1596, the Union of Brest saw the creation of the Uniate Church (later the Ukrainian Greek Catholic Church) in Ruthenia. Like other Eastern Catholic Churches, the Uniate Church maintained the liturgical, theological and devotional traditions of the Orthodox Church despite its new allegiance to Rome. 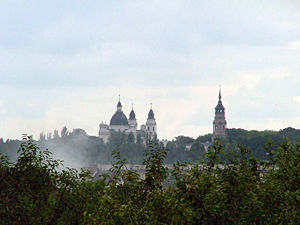 When the Russian Empire gained the territories of Belarus, Ukraine and Poland through a series of wars and Partitions of Poland that lasted from the 17th through the end of the eighteenth centuries, the Uniate Church was systematically absorbed by the Russian Orthodox Church, and in 1839 abolished altogether with the Synod of Polotsk. However, the latter event did not affect the Eparchy of Chelm. Thus after the November Uprising in 1831, the Synod of Polotsk which disestablished the Uniate church outside the Kingdom of Poland did not affect Eparchy of Chełm.

The greater longevity of the Uniate Church in this region was attributed to several factors. The Eparchy's territory came under Russian control later than did any other Uniate territories ultimately absorbed by Russia (1815 unlike 1795). During the Third Partition of Poland in 1795, it was granted to Austria. Only two decades later, after the Russian victory in the Napoleonic Wars did it become part of Russia. Also, unlike other Uniate regions within the Russian Empire, it had been part of the autonomous Congress Poland. Another factor affecting the Uniate Church's longevity was its deep roots in the local population, which unlike other Uniate territory was deeply mixed with Poles and Ukrainians both ethnically and culturally. Both groups in the Chełm region tended to view the Russian authorities as their mutual enemy. The Tsarist pressure on the Polish population, was also applied differently than that on right-bank of the Bug. The use of Polish hymns, organs, and rosaries within the Uniate eparchy was considered a matter of pride, and attempts by Russian officials to curtail their use were defiantly ignored.

In contrast to the pro-Polish attitude of many of Chełm's Uniate parishioners and clergy, during the mid-nineteenth century the Uniate Church of neighboring Galicia was dominated by anti-Polish Russophiles (for more information about them, see Ukrainian Russophiles) [1] Galician Russophile priests, recruited in Vienna by the Russian embassy and in Lviv by Yakov Golovatsky, the Russophile president of the University, were encouraged to accept posts in Chełm by the Russian government, which provided them with higher salaries and more prestiguous positions than they could expect in Galicia itself. The newcomers were often opposed by the local people of Chełm, and petitions to the last Uniate Bishop complained of "Galician wolves".[2] The Russophile Galician priests would play a major role in the conversion of Chełm Eparchy.

By the end of the 1860s, political circumstances had changed. In 1865, following a failed uprising against Russia by Poles, the autonomous Congress Poland was abolished. After having struggled with Russian authorities, the Uniate bishop Mikhail Kuzemsky issued a letter of resignation and left Chełm. His resignation was not accepted by the Vatican, while the Russian authorities appointed a Galician Russophile priest, Markell Popel, as administrator of the Eparchy, despite Popel living in open concubinage.[3]

The Conversion to Orthodoxy was immediately preceded by the "purification" the Chełm eparchy of all Latin rituals from the Liturgy, ordered by Popel in October 1873. Initially, it was ignored by many priests, until the Russian state ordered them to sign a declaration that they would abide by the new rules by the New Year of 1874. Over twenty priests refused, and were either arrested or escaped to Galicia. Resistance to the changes was widespread among the people, particularly in the northern areas of the eparchy. In numerous parishes, the priests attempting to implement the reforms were dragged out of the church or their belongings were packed outside the rectory. Russian police and Cossacks were used to force the parishioners to accept the new rules; parishioners were sometimes beaten or shot. The struggle over ritual has been described as being comparable to that of the Old Believer schism, and one case of self-immolation was recorded.[4]

The purification having been completed by the end of 1874, from January 1875 until May of that year all of the parishes proclaimed their union with the Orthodox Church. The Uniate eparchy was dissolved and incorporated into the newly created Orthodox eparchy of Chełm and Warsaw, with Bishop Popel becoming suffragan bishop of Lublin resident in Chełm. The Chełm clergy was purged of most of its native priests, who were replaced by emigrating anti-Polish Russophile priests from eastern Galicia. In March 1881, out of 291 Orthodox priests in the former eparchy, 95 were native Chełm priests who had converted, 53 were Orthodox priests who had moved into the Eparchy from elsewhere, and 143 were Galicians. Sixty-six native Chełm priests who refused to convert fled to Galicia, 74 were exiled to Russia proper or imprisoned, and seven died as martyrs. During the struggle over purification and conversion, a total of 600 faithful were deported and 108 lost their lives.[4]

In Galicia, the forced conversion of Chełm was met with support on the part of the Russophiles and indifference among other segments of the Ukrainian population. Despite their opposition to the Russophiles, Galician Ukrainophiles were themselves supportive of Purification of Latin rituals and unsympathetic to the pro-Polish Chełm priests. The Russophiles succeeded in preventing most exiled priests from Chełm from obtaining positions in Galician Uniate parishes.

The unpopularity of the conversion within Chełm had been strong enough that when, a generation later in 1905, following the Russian Revolution of 1905 in which the Tsar issued a series of liberalisation policies under which the formally Orthodox population of Chełm was allowed to return to Catholicism, 170,000 out of 450,000 Orthodox did so by 1908 despite the Russian authorities only allowing conversion to the Latin Rite.[4]

In 1912 the Imperial authorities created a new Kholm Governorate, split from Congress Poland, to facilitate Russification and conversion of the non-Eastern Orthodox Christians.[5]

Following World War I, Chełm was incorporated into the Second Polish Republic and this time the Orthodox population was persecuted, bearing the brunt of Polonization efforts.[6] After World War II, Chełm was retained by the Polish People's Republic and, by irony, today it is a strong centre for the non-Galician Ukrainian culture and the Polish Orthodox Church.