In linguistics, a control construction (also called equi-NP deletion) is a clause that contains a main clause (or matrix clause), the predicate of which has two complements — an embedded clause (or subordinate clause) complement and a nominal complement that acts as the semantic argument of the main clause and of the embedded clause. This nominal argument is the controller (or antecedent). Verbs that occur in control structures are control verbs (or equi verbs).

For example, in the English sentence

the control predicate is tried, a control verb. Its complements are the subject controller George and the embedded nonfinite clause to escape. George is the semantic agent argument of tried. The verb escape also has an agent argument, but in English this argument does not appear in the embedded clause (i.e. it is covert). Since this is a control structure, the covert argument of escape is the same as the overt argument of tried, which, in this sentence, is George.[1] (In other words, the covert argument is a bound variable.) The only semantic interpretation of this sentence is that the person trying and the person escaping are the same — both are George. An interpretation where George is trying and a different person is escaping is impossible.

One way to represent this is to use a bound variable in the embedded clause that is coreferential with the controller. This coreference can be show with co-indexation:

Here the bound variable (the covert subject of the embedded) is represented as X. It is also coindexed with the controller George (the subject of the main clause) with a subscript i indicating that they both point to the same referent. In other words, necessarily X = George. Semantically, the meaning of this sentence is George tried (George) to escape. The coindexing also shows that X cannot point to a different referent. It is impossible in this control sentence that X = Baron, for example, which would have the impossible meaning of George tried (Baron) to escape.

However, other languages have embedded clauses that are finite (i.e. the embedded verb is inflected for tense and agreement).

Argument control refers to grammatical principles that allow the semantic identity of a verb's argument to be determined even though this argument is not realized phonologically within the syntactic projection of the verb. The most typical instance of argument control involves the unrealized subject of the non-finite verbal complement of a raising or control verb. The unrealized subject is typically interpreted as coreferential with either the subject or the object of the main verb.

For example, in the following sentence, the control verb tried selects a participial complement calling me yesterday:

In other examples, the identity of the unrealized argument is not determined by the grammatical structure of the sentence. In the following examples, the missing subject of the non-finite verb phrases is interpreted generically, by so-called arbitrary control:

Control and raising constructions appear to be superficially similar in the surface forms of sentences, but they are actually quite different.

Control Theory in Government and Binding 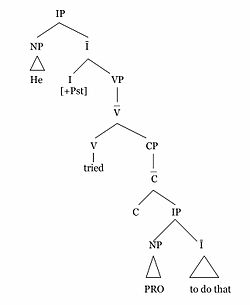 In the Government and binding theory framework the above-mentioned sentence is analysed as follows:

The existence of PRO ([Spec, IP] in the embedded clause) is required by the Extended Projection Principle, which says that all clauses must have a subject. The main characteristic feature of PRO is that it must be ungoverned (the PRO Theorem). In terms of features it is [+anaphor, +pronominal] (see Binding (linguistics)). That is why such sentences as *I expect [John to meet PRO] are ungrammatical: PRO would be theta-governed by the verb.

The expletive test (using non-referential there or it) helps to distinguish between object-control and other types of verbs: